OUT OF THE BOX DIRECTION 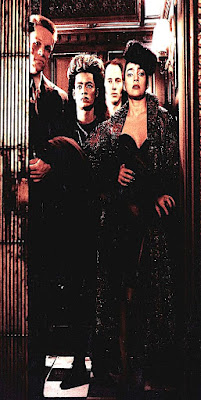 Rules of the road
Recently I came to the revelation that the most
popular topic in New York is where things are.
The other day on the elevator at Bergdorf's two
ladies were deep in conversation about places
they'd recently been. One after another rattled
off a plethora of street and avenue numbers as
they mapped out their recent destinations. Then
suddenly it came to me. Acting like a local may
be the ultimate trump card for any New Yorker.
And nothing validates someone in the know
than knowing the exact location of anything
located just about anywhere within this city's
five boroughs. It's the ultimate MAP QUEST!

Insider information
Such urbanites are no different than my friends
and neighbors in rural Montana. It's equally as
challenging to get from here to there on gravel
roads and byways that may or might not have
signs along the way. Thus connecting the dots
by indicating it's just east of so and so's "place"
and sits along whatchamacallit creek is often
the only way to insure that visitors get to their
final destination. Hence knowing where one is
can be a badge of honor. Proving their right to
lead given they're an expert on all things local.
And when asked nicely, they will proudly tell
any novice or stranger how to get on their way.

Part and parcel
Don't assume that everybody around these here
parts actually knows where they're going. "T"
is an expert of navigating the circuitous country
paths of Connecticut's Fairfield county. However
once in Manhattan my dear friend tends to lose
her bearings. Meaning that when queried about
the location of a certain eatery she may say "Oh
it's somewhere in the east sixties." A more than
broad geographic range given the Upper Eastside
covers almost two square miles of this wee island.
Oddly "T" almost always gets to exactly where
she intended to go. And so her primary challenge
is communication not the art of navigation itself. 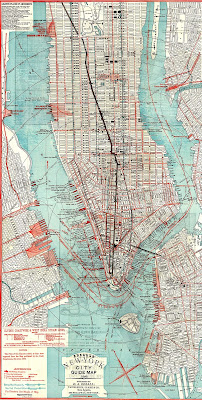 Back to square one
Once one understands the lay of this land it's
really rather easy. With the exception of the
far lower portion of Manhattan the majority
of town is laid out in a basic grid. Our streets
numerically ascend from the south to north.
Whereas all avenues run west to east with the
exception of Broadway which slowly angles
across the island. Once south of Fourteenth
Street things get jumbled in a series of old
neighborhoods. West and West Villages -
Greenwich Village proper - SoHo (South of
Houston) - Nolita (North of Little Italy) -
Tribeca, Chinatown, Wall Street, and so on.

Points of interest
When visiting this city that never sleeps - please
speak up. Every Manhattanite prides themselves
on being an expert. So don't hesitate to ask them
for directions. Nothing makes locals beam more
than telling you exactly where to go. Slowly you
will start to get your bearings. Key skyscrapers
can be much like beacons that guide you from
afar. The Empire State building sits at 34th and
5th. The Chrysler at 42nd and Lexington. One
World Trade Center rises from the foot of the
island near the Financial District. Central Park
sits in the middle from 59th to 110th Streets. It's
really all rather easy. You'll quickly figure it out! 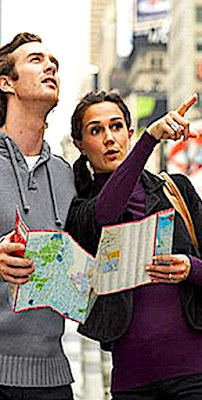 Traveler's advisory
The most important thing is to act as if you
know where you're going even if you don't.
NEVER stop dead in your tracks with an
open map in your hand. Not only may some
local knock you over, some opportunist will
try to sell you tickets on some tour bus. The
fact is that many folks who've lived here all
their lives occasionally get lost. We simply
stride through whatever neighborhood we're
in with an air of confidence until we figure
it out. And if you must consult your phone
to get your bearings, please step aside! In
the end you'll get there. Enjoy the ride!
Posted by montanaroue at 4:00 AM