GARBAGE IN... GARBAGE OUT 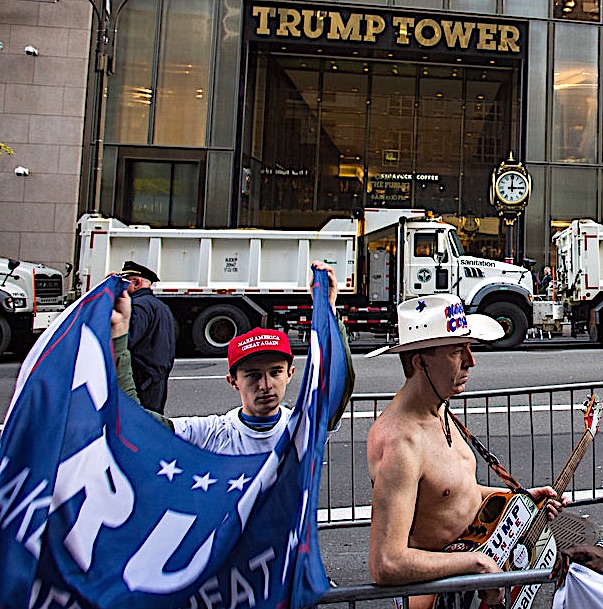 Free range
Often things are beyond our control. Or beyond
our scope of reason. The last two apartments we
have rented here in Manhattan have been within
one or two blocks of Trump Tower. The first was
on 55th above the Core Club. Back in those days
Mr. Trump was nothing more than a trumped up
fraud on reality TV. Therefore during hot or cold
weather I often escaped the elements by cutting
through said marble and brass monstrosity. The
joint was always empty save for a few Iowans
snapping photos. My only risk was running into
someone I knew on Fifth Avenue. Little was as
awful as being associated with anything Trump! 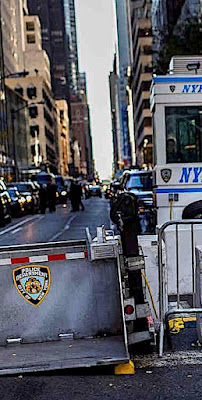 Local traffic only
Today we reside one and a half blocks from
what is THE number one tourist attraction in
this city. At the time we chose where to roost
Donald Trump was yet to be inaugurated. But
already there were signs of heightened security
in the neighborhood. 56h Street was closed
between Fifth and Madison. Gigantic concrete
blocks were placed around the city block that
Trump Tower's partially inhabits. Soon after
Mr. Trump went to Washington we had NO
fuss beyond Melania or Baron's occasional
comings and goings. And slowly we locals
were lulled into a false sense of security.

New sheriff in town
Sadly our world changed dramatically in the last
seven months. We've almost come to expect that
a speeding vehicle may ram into a crowd at any
moment. Meanwhile our President's incendiary
statements have only put not only him but all of
us at risk of some "crazy" going postal. All why
we must live in a police state. Recently I decided
to circumvent the high humidity to chill via the
"open to the public" Trump Tower atrium. This
time I was greeted by several gentleman in full
combat gear holding submachine guns. Next I
had to put my groceries through an x-ray scan.
Thus by the time I exited I'd truly lost my cool. 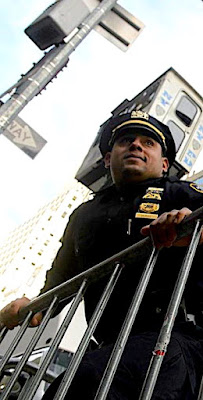 Moving violations
Said episode was an omen of things to come.
Yesterday Mr. Trump and entourage arrived
"home" for a three day stay. That requires
thousands of federal, state, city, and Secret
Service law enforcement officers move into
my neighborhood. Our street is closed off to
vehicle and pedestrian traffic through late
Wednesday. At times I'm required to pass
through a security check to get home. Such
precautions make sense given last night
thousands marched to Trump Tower to
protest Charlottesville and our President's
tepid and late condemnation of the guilty. 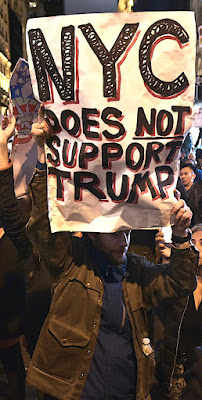 Above all else
Part of me wanted to join in. Yet it seemed too
foolhardy to risk being run over by a redneck.
Instead I listened to their roars from the safety
of my balcony. Even from my distant perch it
was a moving experience. Which causes me
to wonder what if anything President Trump
could hear from his gilded cage. The very fact
that thousands are chastising your inability to
stand against bigotry, hatred, and terrorism has
to be a humbling experience. Yet while within
earshot, I'm certain all pleas for equality fell
on deaf ears. The high and mighty never lower
themselves to our level unless they're forced to.

Cash & carry
The arrogance of it all is what I find unnerving.
How can anyone claim to a man of the people
while you decadently disrupt America's largest
city for three days? Given "fiscal conservatives"
put Donald Trump in office - one would hope he
might exhibit some level of prudence. Instead he
freely moves about wherever he pleases incurring
over sixty million in Big Apple security costs to
date. Why doesn't he stay put where he belongs?
Back in Washington D.C., at Camp David, or at
one his golf resorts which are far away from us
all. If this is the land of the free then please Don,
PICK UP YOUR TRASH AND LEAVE NOW!
Posted by montanaroue at 4:00 AM