LIVING ON THE EDGE 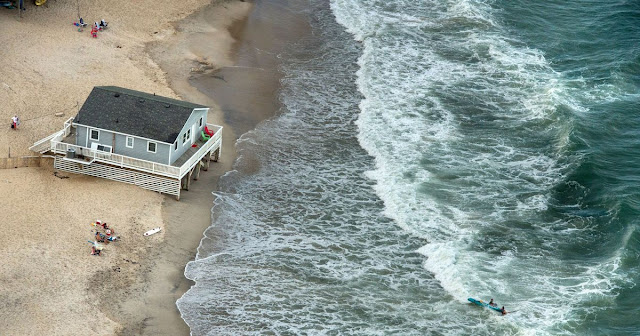 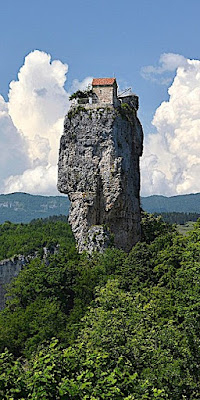 Rock solid investment
As a tot one of my favorite songs in Sunday
School was the "wise man builds his house
upon a rock." A melodic recant of a biblical
parable suggesting one be well grounded.
Throughout history many a "paradise" was
lost due to climactic change, natural crisis,
or geographical shifts. Atlantis lore suggests
that it was a lovely place. However nirvana
is not always a wise real estate investment.
Thus the advice "location, location, location".
However for some the benefits of a fabulous
view or backdoor beach asset far outweigh
conventional wisdom. Think... Malibu. 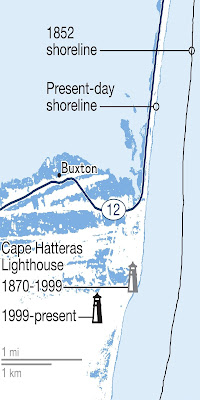 Less is more?
Across the globe lay slivers of sand venture
out into the sea. America's outer banks are
a long line of interconnected islands which
stretch from southern Virgina down to the
top quarter of North Carolina. For centuries
southerners built your primary homes on the
mainland. Erecting temporary structures that
were their escape from reality. Over time
greed and arrogance fueled a building boom
upon said paradise's ever shifting sands.
Now natural phenomena such as climate
change are causing many to have a sinking
feeling. As their dreams slip into the sea. 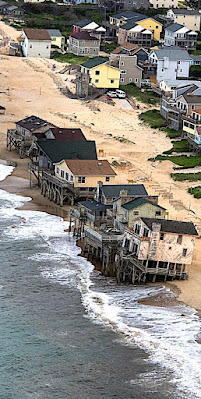 Here today, gone tomorrow?
Yesterday the New York Times published
an in depth article about the community of
Avon, North Carolina. A lovely spot with
there are but a few hundred live year round.
All now saddled with the responsibility of
trying to protect something that was never
'meant to be. In order to survive some are
suggesting that property taxes must double
in order to fund efforts to stem the ocean's
tide. Which many experts deem little more
than an exercise in futility. The question is
can they accept reality? Learn from their
mistakes? And rebuild on higher ground?
Posted by montanaroue at 9:47 AM