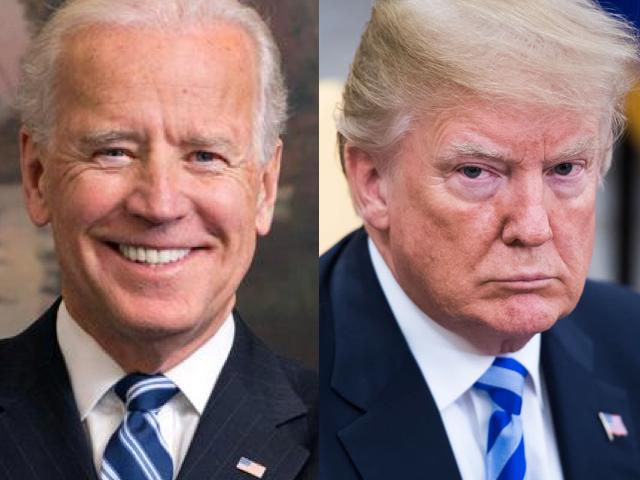 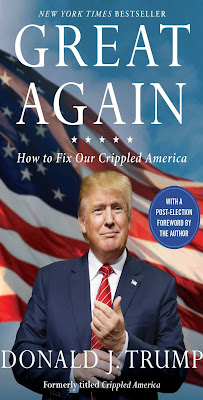 Open and shut case
Long ago someone decided it's better to not
judge a book by its cover. Yet said theory is
countered by the fact that often perception
is reality. Packaging - i.e. the message one
sends up front - skews how we see things.
Depending on the audience some saw Mr.
Trump as a bold and brash outsider. A guy
capable of draining the swamp. When in
truth he was a proven master manipulator.
A huckster who knew better than most how
to work the system to HIS advantage. So
why were so many blinded by his carefully
crafted facade of delusion? 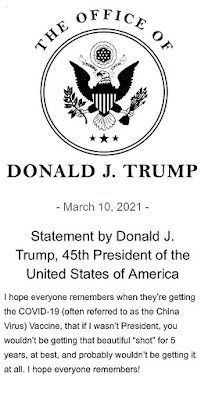 For bitter or for worse
To each his own. As in approach to engagement.
Hence President Biden's speech last night was
all about us not him. Rather than boasting he
inspired. Instead of taking credit he gave credit
where it is due. While such an approach may
never win over his foes, it sent a clear message.
Versus Mr. Trump's "official" social media post.
In which he claimed credit as America's vaccine
victor (shown right). Did such a squeaky spiel
get his message across? Or further affirm he
is little more than an odd man out? Out of sorts
and the spotlight that is... Could it be that now
Donald is finally showing us who he really is? 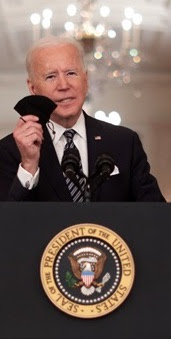 Get real
Everybody has their own schtick. A carefully
assembled toolbox that helps us make a good
impression. Long ago I learned humor was a
way to break the ice. Hence I reach out with
a smile on my face. And more important try
to treat all with whom I connect in a manner
that gives them their due respect. As with all
things in life it's the little things that count.
A smile (sadly now hidden by a mask). Or
a simple "thank you". Or a few extra bucks
left on the table. Simple ways to prove you
appreciate others for all that they add to your
life. Practice what you preach... it works.
Posted by montanaroue at 9:17 AM