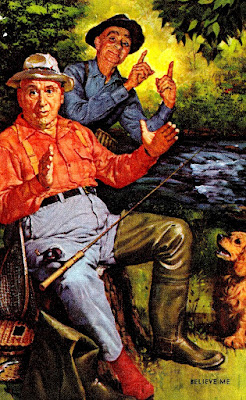 Something's fishy
Living in a rather isolated locale, it's
easy to be rather critical. While I'm
the first to shake my pom poms for
Lewistown,  said small pond can at
times seem somewhat limiting to a
former big fish. Thus I'll admit that
I can be more than a tad critical upon
occasion. While we're blessed to have
one establishment that serves it up
pretty damned well, the balance are
mediocre at best. How far must one
travel in order to experience a decent
meal? Are we out of service?! 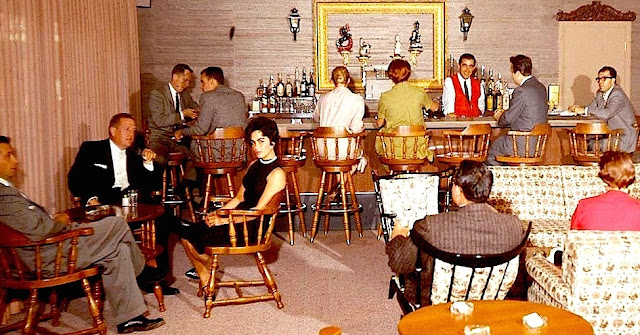 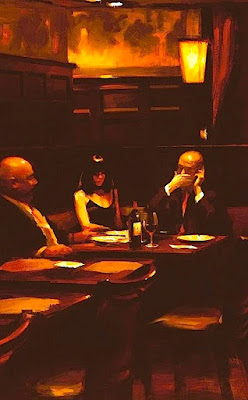 Disconnected
The other night we took our neighbors
out for dinner. Having heard of some
changes at our local hotel's restaurant -
we all thought we'd give it one more
try. We opted to dine in the bar which
was probably our second mistake post
going there. Long story short - once
again I had to teach the bartender how
to mix my Manhattan, beg for menus,
ask for silverware, and dine upon a
sticky surface. Sadly, the only thing
that was done well was the burger
that I had ordered RARE. 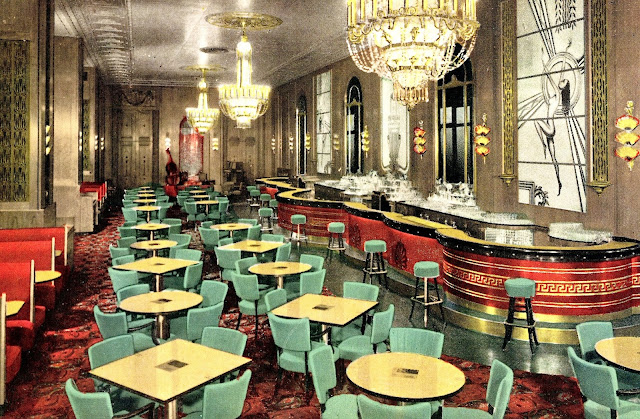 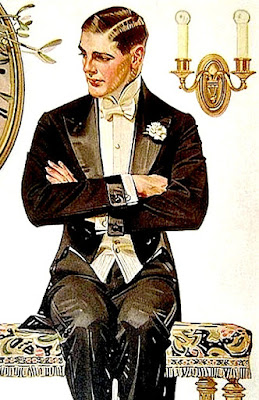 Neither here nor there
Obviously it wasn't our most shining
moment. Given Lewistonians are if
nothing else a captive audience, we
have come to expect less rather than
more when it comes to ambiance.
However I recently took a trip to a
rather large midwestern metropolis
only to discover the grass is NOT
always greener elsewhere. Shortly
after checking into a fabulously new
and modern downtown hotel, I went
down to the bar. After grabbing my
stool I sat and patiently waited... 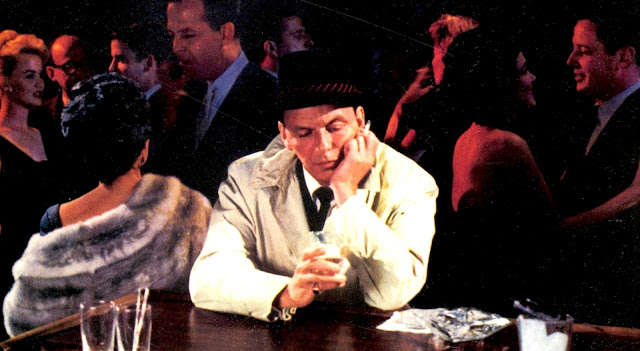 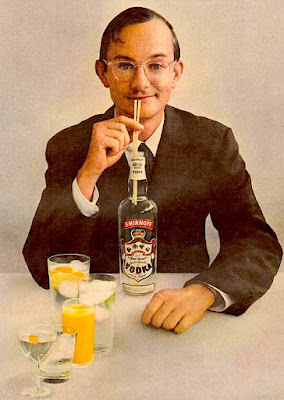 Bare essentials
Finally somebody offered me a drink
and after two requests... a menu. My
cocktail was plopped before me sans
napkin or coaster. Bravely I sipped
then waved at the barkeep multiple
times before finally ordering dinner.
Historic precedence would suggest
that post taking my order a placemat,
silverware, and water glass would
magically appear. Apparently Merlin
was off for the night given my dinner
arrived without proper weapons of
destruction. Every man for himself! 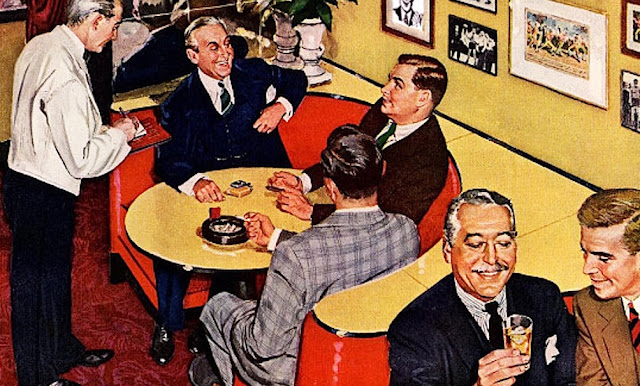 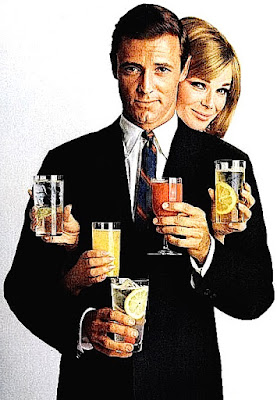 Basic instinct
So what was the difference between
here and there? NADA. At about
sixteen hundred miles apart - both
eateries paid me a disservice which
I in return had to pay for. Proof that
my gaps in service had little to do
with where I was. Rather, it may be
proof of the end of civilization. The
fact is I didn't ask for much beyond
the basics. Yet apparently providing
flatware and serviettes are beyond
the scope of the modern "hospitality"
industry no matter where one lives. 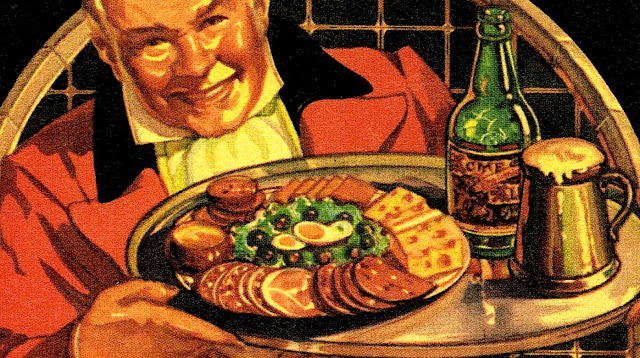 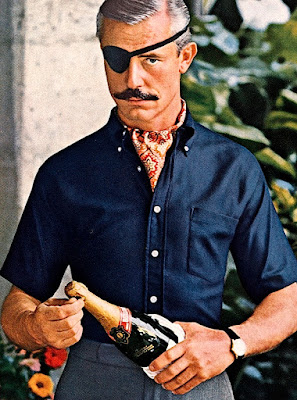 On the job training
Why are we willing to pay more for
less? Back at the bar, a gent sitting
a few stools down literally had it.
He quietly suggested our bartender
pursue a new career given he was
obviously incapable of executing
his job description. He coached
our bar boy on basic table waiting.
And while young man nodded, he
subsequently returned to the error
of his ways. Later on I overheard
him grumbling about poor tips.
Enough of this foolishness! 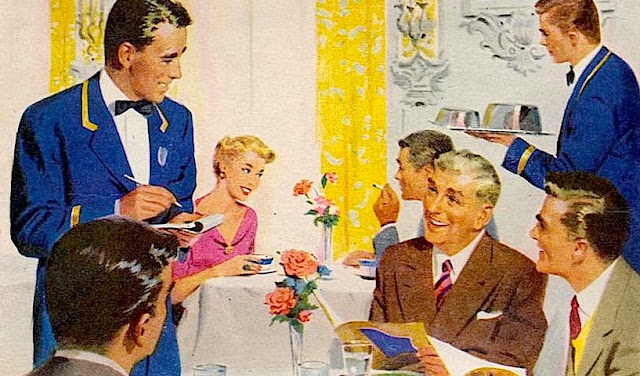 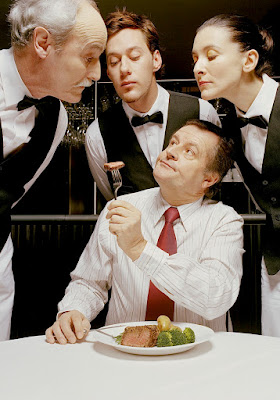 Gift with purchase
Here's a tip for all of you wayward
servers. One must properly dish it
out in order for customers to open
up their wallets. Going through the
motions doesn't guarantee fifteen
percent. A tip is extra recognition
of a job well done. Indication that
you went above and beyond basic
standards of service. So if you want
more... give more. Being proud of
what you do is the best way to earn
respect. And if you get a little cash
along the way... all the better!
Posted by montanaroue at 4:00 AM