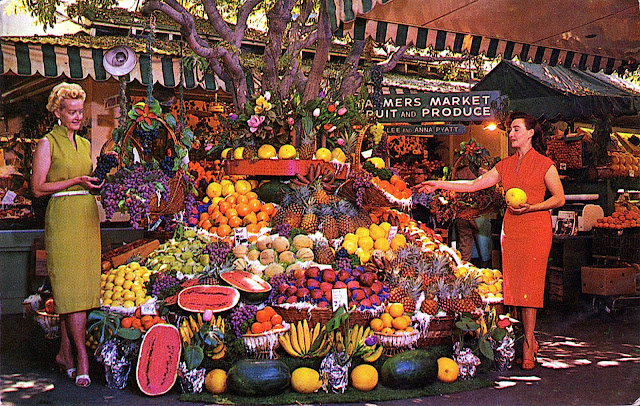 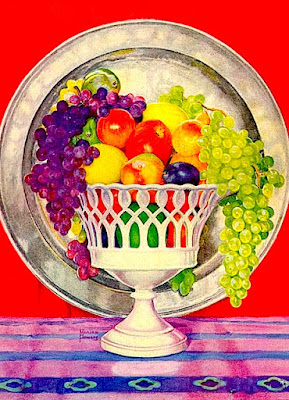 The fresh stuff
For one who is in theory a "fruit",
I really don't like the stuff. Well...
at least not if it's fresh. Frankly
I've an aversion for any pluck off
the tree. On the other hand give
me a package of Starburst, Mike
& Ikes, or Chuckles and I'm in
fruit heaven. Given I've never
met a bowl of Jello that I didn't
like, I've no interest in produce
unless it's in a pie, tart, or danish.
So faux now... the fruits of my
labors will rarely be fresh. 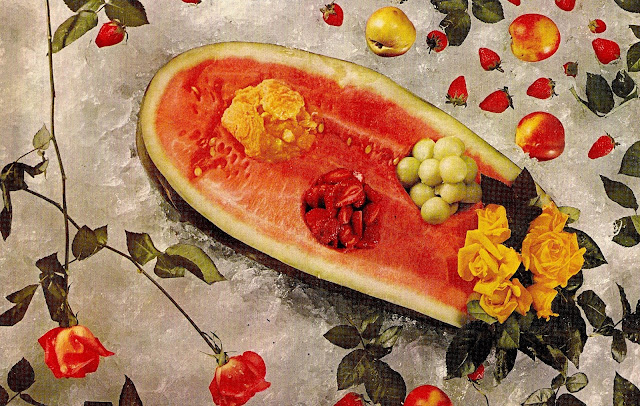 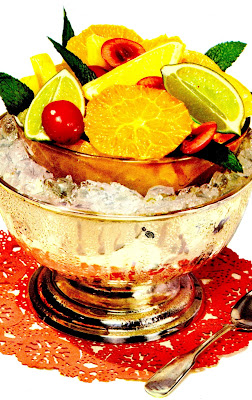 All mixed up
Obviously this gentleman adores his
cocktails. However that extends only
as far as an occasional fuzzy navel.
Whereas others prefer to toss it off
with less than intoxicating varieties.
Served one too many times from a
can, I can't stand most fruit cocktails.
Most of the time one is served up an
unripened mound of a bitter harvest.
However when in Rome I do nibble
on a Macedonia di frutta. Whether
that's due to Italian fruits or a liberal
splash of grappa is up for discussion. 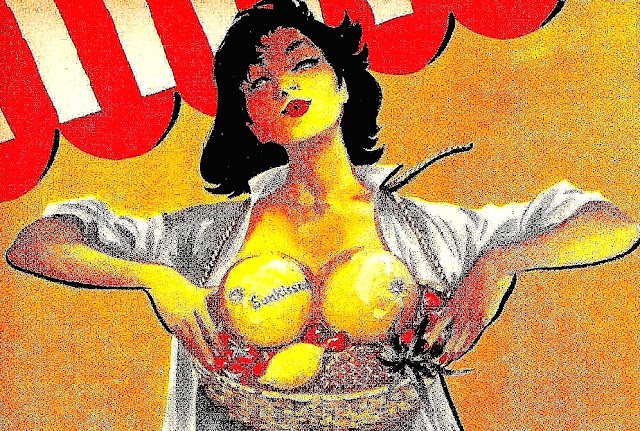 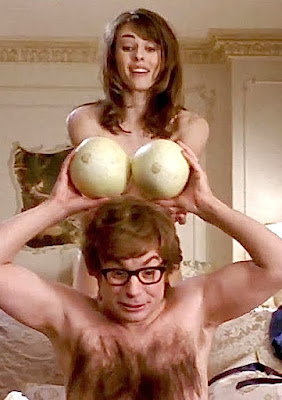 Main squeeze
Maybe it's due to my orientation but
honestly, I've no interest in squeezing
your melons. In fact I'm fairly certain
that I'm allergic to them. After a few
nibbles I get an itching sensation deep
down in my ear canals which does not
tickle my fancy. Hence your casabas
are more than safe with me. Even if
I opted to slice and dice, the result
would require an antihistamine which
makes me sleepy. Hence the pressure
is off all orbs of sweet flesh given he
prefers to munch on another's nuts. 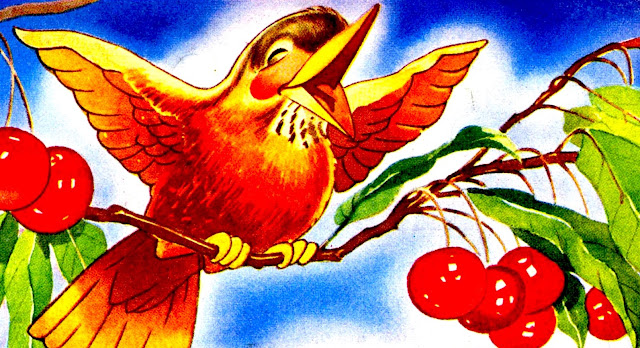 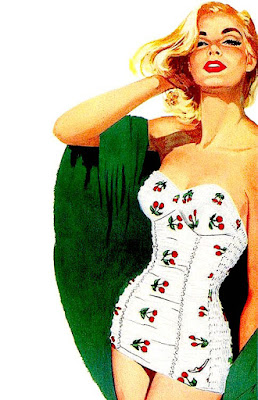 Pie in the sky
Given it's been many years since this
boy's cherry was popped, one could
assume that I've been there done that.
Yet my life is often a bowl of cherries
given it's the fruit I truly adore. While
a brandied bing zings my strings (in a
Manhattan), little satisfies as tart pie
varieties. That is of course only after
they've been pitted, sugared, and then
baked in Frank's mother's flaky crust.
"B & S" gave us a pie cherry tree for
our anniversary so by next year, there
will most certainly be pie on my face. 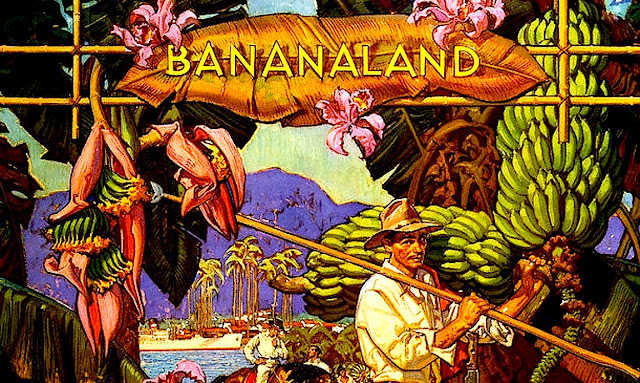 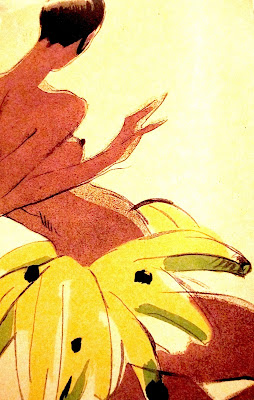 What about them bananas?
Unlike Mae West - I've never met a
banana that I liked. Somehow I know
that most of you must find that rather
surprising. Don't get me wrong, I've
peeled my share over the years. Yet
I've never had an interest in nibbling
on them. Frankly I can't stand their
smell. Just a whiff of that sickeningly
sweet scent sends me over the edge
(of the toilet bowl that is). Frank
loves them and hence they sit in a
bowl on the kitchen counter. As far
away from me... as is possible. 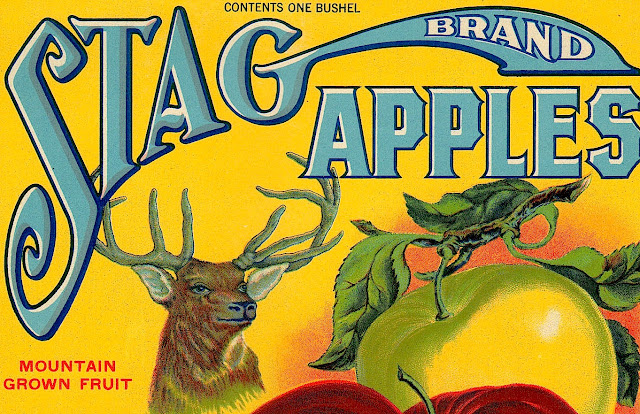 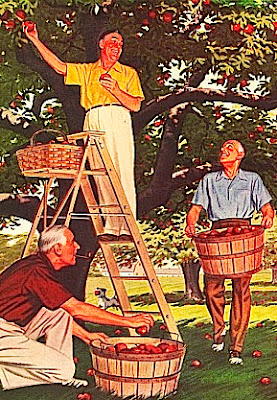 Rather picky
Upon purchase the Passion Pit already
sported an apple tree. Last fall it's fruit
hung heavy upon it's boughs until the
deer discovered it. Suddenly most of
it's yield became their ill gotten gain.
Thus we plan on planting the balance
of our fruit trees in the back behind
six foot walls. While I doubt we'll be
canning anytime soon, we're certain
to enjoy a bevy of spring blossoms.
While I don't do fruit, I do love a vase
of forced blossoms indoors in March.
And what could be fruitier than that? 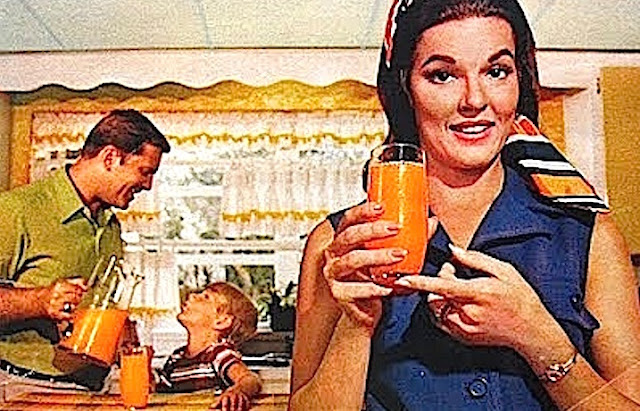 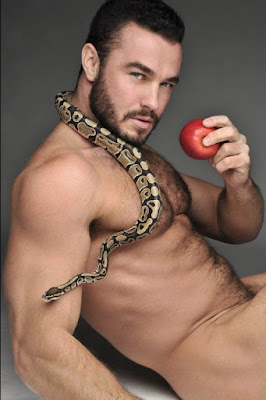 Forbidden fruits
Who doesn't still like to occasionally
get screwed? By that I mean sipping
OJ and vodka mixed in a screwdriver.
At least for me, orange juice is either
too sweet or two acidic. Which oddly
reminds me of the orange juice queen
Anita Bryant. Don't you ever wonder
what happened to the Bible thumper's
main squeeze. Post attacking us fruits
she literally disappeared from most of
our collective consciousness. Proof
that one shouldn't mess with Mother
Nature nor... the GLBT community!
Posted by montanaroue at 4:00 AM