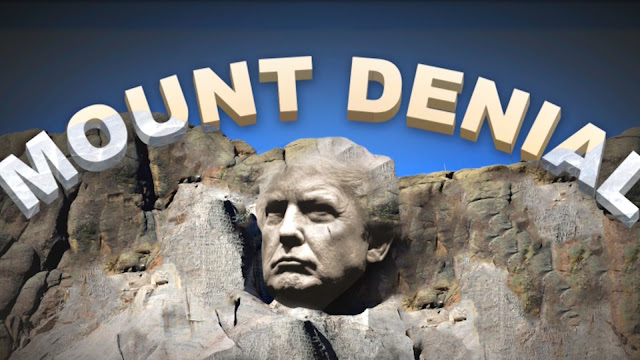 What me worry?
For the past few days I've been distracted.
Faced with all of the challenges confronting
most Americans I've opted out. To be honest
it's quite easy to fein ignorance. Yet rarely
is such a state of denial bliss. That's because
the facts never go away. Truth lies in wait.
Ultimately culpability is one's only option.
Well, that is unless you are the President of
the United States. Recent exposure of his
flaws have pushed him again into a state of
denial. One where everything is somebody
else's fault not his. Hence rather than fess
up to the error of his ways he ignores them.

Odd man out
Last I checked, assuming responsibility is
a key element of leadership. In other words
the onus is on whomever is at the top. The
buck stops there. Yet Mr. Trump continually
defers all accountability to vaporous villains.
Which in theory is fine when one cheats at
golf. But of great concern when one leads
the greatest of western nations. Thus denial
has become Mr. Trump's answer for almost
everything. Confronted with facts related to
Russian bounties on American troops, he
claims who knew? Aggressively denying
instead of proactively addressing the issue.

Perception is reality
Frankly, I pity the man. In part because deep
down he must know what a failure he is. Or
maybe not? By definition a megalomaniac
thrives on power alone. Meaning that what
he does with said clout is of no consequence
given simply being in "control" is satisfying
enough. Our collective challenge is when
America is confronted by powers beyond
our control. The coronavirus has no shame.
Nor does a dictator such as Vladimir Putin.
Faced with unfettered evil we have only one
choice. To bravely face our foes and eradicate
them. But first, you have to admit they exist...
Posted by montanaroue at 4:00 AM