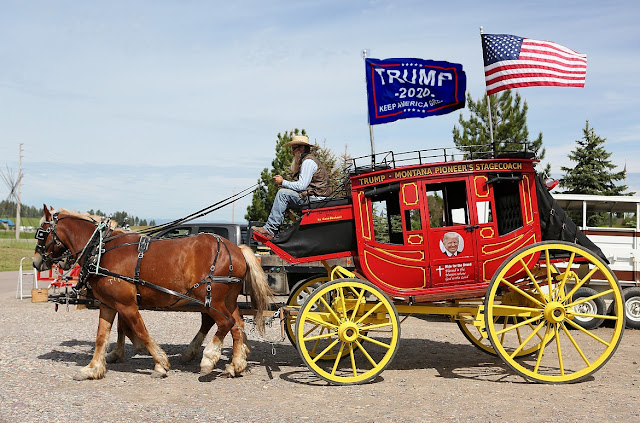 Antique road show
We just completed a three day celebration of our
country's founding. Lauding all of what makes
America great even if unable to do so enmasse.
Sadly many of our patriotic traditions - parades,
picnics, concerts, and fireworks were cancelled.
Leaving us to our own devices. Many Americans
hunkered down. Staying to themselves instead of
risking exposure. Yet others seized said miss to
still strut their stuff, make a statement, and play
politics. Here in Lewistown a parade of autos
hit Main Street. All flying our flag from their
vintage automobiles. Combining nostalgia and
patriotic pride with Coronavirus caution.
.

Upward mobility
Over seventy percent of locals voted for Trump.
Yet oddly, there were no election signs in the mix.
However this liberal was sideswiped days earlier
when I encountered a "Trump" stagecoach in town.
Said conveyance personally financed and crafted
by Gene Bushnell of Troy, Montana (pop. 930).
Now on a roll across Montana to North Dakota.
Said journey's purpose to honor Montanan pioneers.
And promote Donald J. Trump's re-election. Said
red riders proffered thumbs up as they passed. A
presumption that this true blue liberal had to differ
with. As in the raising of my downward fifth digit.
After all, somebody had to show them the way... 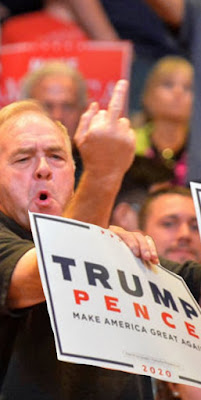 Road rage
To which the supposed patriots responded -
"F" YOU! Leaving me in their dust and in
a quandary. Exactly when did demeaning
our fellow citizens become patriotic? Sadly
such an American way only leads to a dead
end not North Dakota. Diversity of thought,
race, religion, and creed is what has always
made America great. Not myopic posturing
nor profanity. An ever increasing phenomena
that in my opinion is if UN-AMERICAN.
So go ahead and wave your flag. But please
remember the pledge that accompanies it -
"with liberty and justice for ALL!"
Posted by montanaroue at 4:00 AM