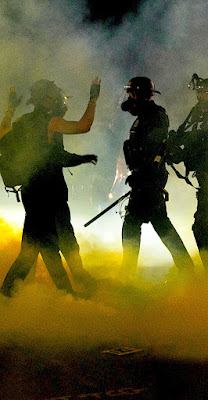 Fear and loathing
There's little worse than when your little girl
tells you she's scared. As a father one leaps
into gut wrenching action. Doing anything
to help the innocent. However there are times
when even the most ardent and committed of
parents can't save anyone let alone themselves.
Especially when your "baby" is almost thirty,
a mother of two, and twelve hundred miles
away. My offspring's concern was the crisis
in Portland. You know what I'm talking about.
Anonymous government forces grabbing all
who disagree and then disappearing. That's
the kind of crisis none of us have answers for. 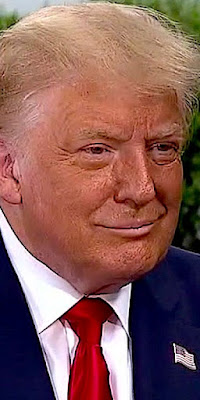 Slip sliding away
As things get more bizarre one can't help but
wonder what Mr. Trump's acolytes think. On
Fox this Sunday his makeup was bad enough.
But what stood out was his audible inability
to grasp reality. More than a disconnect from
facts - Mr. Trump's stumbling simply proved
his arrogance and ignorance. And yet many
continue to defend him. Make excuses. To do
anything but deal with the wounded elephant
in the room. All due to "political principals."
Their red mantra blinding all. Leaving them
to watch their Trumpian dreams melt away
when doused with a liberal splash of truth.

There's no denying
Four years ago, post the election that same little
girl told me she was ashamed to be an American.
Helpless, we sat back to watch the reality show
that our government became. Yet never before
has there been a better time to step up, make our
voices heard, and actively engage in our political
process. Which is what our fellow Americans are
doing across this great land. Some worry nothing
can be done. That we'll never repair the damage
already done. However nothing could be further
from reality. Change is coming. And infectious
vaccine of positive, proactive, and prescriptive
patriotism. We can and will make a difference!
Posted by montanaroue at 4:00 AM