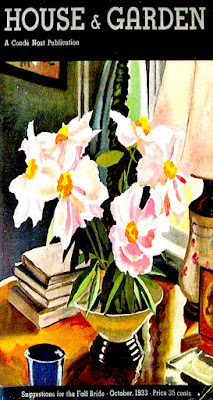 Deja vu?
What goes around comes around. However
the older I get the more familiar things are.
I've always be a home-o-holic. Meaning that
from boyhood on I've rearranged my life's
furniture. As a true devotee (addict actually)
I've devoured every single shelter publication
that ever hit a newsstand. That includes over
a decade of archived House & Garden issues
from 1912 - 1922 as we worked on our house
restoration. Add a library filled with decorator
tomes (i.e. coffee table books) and there is no
doubt I've been there... done that. So please
don't try to fool me a second time around. 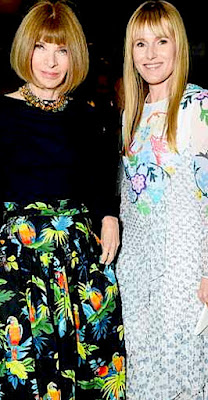 Misery loves company
Many share the same addiction. For some
where and how they live is almost as vital
as oxygen. Thus it's no surprise that most
fashionistas are consumed with more than
what they put on their backs. In addition
they're passionate about where they hang
their hats post a day on the runway. Thus
it's no wonder that Conde Nast leadership
handed over the reins of the venerable
Architectural Digest to Anna Wintour and
her acolyte - Amy Astley. Well ladies, as
a devoted subscriber and reader I'm here
to tell you that I'm on to you. Got it girls?! 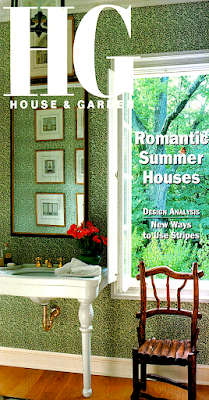 Unsolved murder
For those of you too young or disinterested
to know, Anna Wintour has been there, done
that. Ms. Wintour's entry onto the American
editorial scene was as editor of the esteemed
House & Garden magazine. Starting in 1988
she shook things up at what most deemed a
decorative icon. House & Garden became
"HG." And ten months later post editor Grace
Mirabella's ousting from Vogue, Anna moved
on to bigger and better things. I'll admit that
I adored "HG" for the next five years yet many
others didn't. Hence within five years it was
gone.  Now but a memory of rooms past. 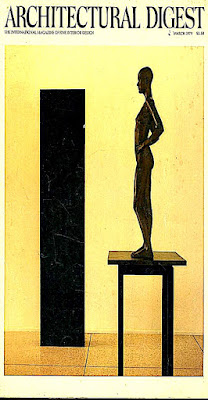 Old enough to know better
Speaking of divas, For thirty five years Paige
Rense ruled over Architectural Digest like a
grand duchess of decor. In part she deserved
all the credit for transforming what had been
a rather mundane industry publication into
a glowing guide to all things glamorous. By
the time Conde Nast purchased said prize
from Knapp - her formula for success was
getting rather tired. When Paige finally left
they stole Margaret Russell away from Elle
Decor and saddled her with transforming the
magazine while keeping Paige happy. Can
you say "impossible"?! Yet she did just that. 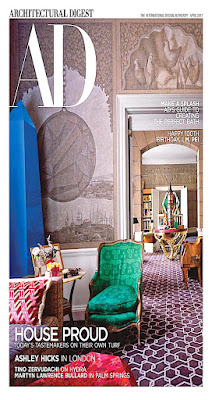 Back to the future
As a gay man who adores glamour pusses -
I know one thing. Forcing such she cats to
collaborate always leads to disaster. Slowly
Margaret made her mark. However once
Anna was handed over the reins as "Artistic
Director" Margaret's days were numbered.
Thus to many it came as no surprise when
she was booted to be replaced by one of
Anna's proteges. Architectural Digest has
since rapidly evolved. With a new design
overhaul premiering this April. Yet this old
deco devourer can't help but have a sense of
deja vu. And see Anna's hand in all of this.

Throwing shade
Let's face it kids, what goes around may come
around. However one would hope that during
said process most of us learn our lessons. Sadly
experience shows that invariably the high and
mighty rarely learn from their mistakes. Hence
the reason that Architectural Digest's readers
are being subjected to an abbreviated version.
Nobody doubts the risk of attempting to shift
a traditional publishing format in our digital
age. However this frustrated follower worries
that yet another magazine murder is about to
occur. All at the hands of a most "shady" lady.
Let's hope this is not a repeat performance!
Posted by montanaroue at 4:00 AM