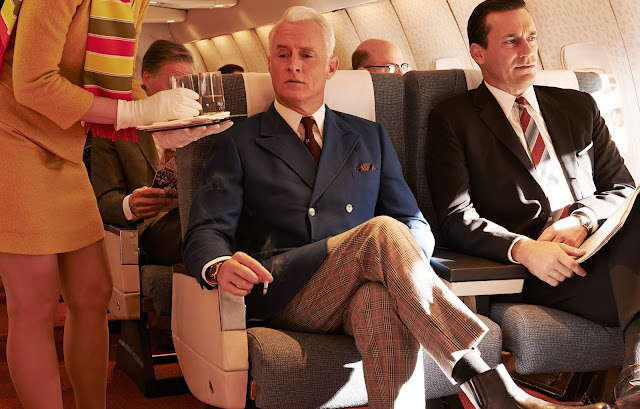 Down and out
If you ever want to know why the fashion business
is struggling... go to the airport. Once you enter into
said state of transit you realize that global slob not
chic is the trend. Honestly, I just don't get it. Yet it's
obvious that everybody has slipped into a sad state
of disregard better known as a comfort zone. Hence
not only is the resulting slovenly sea strewn with
fleece, yoga pants, and tees - it's beyond BORING.
Nobody seems to care and frankly once deep within
the muck of such mediocrity it's rather easy to lose
all hope. Thus whenever I'm on the road I quickly
sink into a state of shock, disdain, and utter disgust.
Whatever happened to strutting one's stuff?

Equipment failure
Seriously, what are you all thinking? Does anyone
look in the mirror before they leave home? In times
past decorum required one dress the part. Nowadays
added security encourages travelers to risk dignity
in the name of comfort. Take the ladies in leggings.
They have no problem exposing their assets for the
world at large. I may enjoy an occasional glance at
what your packages, but prefer to avoid viewing any
junk in your trunk. Yet old and young, fat or skinny,
nerds or hipsters, all sport the same slovenly togs.
The end result being a shameful public display of
sartorial indecency. And we wonder why our world
at large is in such a crisis. It's utter bedlam out there!

First class
All of which is why I must give Donald Trump
and family credit where it's due. They obviously
put quite a bit of time and effort in their outward
appearance. Our new first lady is most certainly
beautiful. Yet at times her taste can veer towards
Victoria's Secret territory. However Melania is
adept at always looking her best. As does Ivanka
who is nothing but impeccable. Tiffany can be a
tad tarty but she always does so expensively. Don
Junior and Eric both wear the uniform of every
other young investment banker from Manhattan.
Stuffy, greasy, rumpled in all the wrong places.
Thus our first family easily stands above the rest.

Package deal
Obviously our new President takes a decidedly
iconographic approach to his look. In essence
he is a walking caricature. From his signature
coif to man tan to Brioni suits he is the living
embodiment of nouveau riche. However within
the context of the rest of the populace, such a
devotion to bad taste has to be admired. In the
end it's all about making the proper impression.
Which is what dressing properly is all about.
It's not about covering one's posterior, it's all
about projecting an image. Perception is reality.
Thus with the proper togs one can rule the roost.
That's why it's called power dressing.

Off bored
With the exception of Manhattan and certain
posh locations it's rather tough to separate the
wheat from the chaff. That's because everyone
looks alike. Thus whether you're a billionaire
or janitor chances are the only difference may
be one's credit limit. While in theory the idea
of living on a common playing field appeals,
the end result is proof that we've lack respect
for ourselves - and others. Adrift in a sea of
sameness nothing sets us apart. Nor delights
the eye or senses. Hence it's no wonder that
the majority of Americans seem to care about
little more than insuring they've got WIFI.

Flight of fancy
It's no wonder that appearances no longer matter.
Nothing seems to be more important than staying
connected while ensconced in an isolated techno
cocoon. Rather than take in our surroundings, we
now sit and peer at our phones, tablets, or laptops.
Armed with headsets or ear bugs we maintain our
self imposed sphere of influence. Nobody matters
except ourselves. Therefore the world at large and
our fellow inhabitants are of no consequence. And
we wonder why we can't get along. That's because
along with style and elegance we've lost our way.
Which makes wonder... what if we all tried just a
little bit harder to make the world a prettier place?
Posted by montanaroue at 4:00 AM