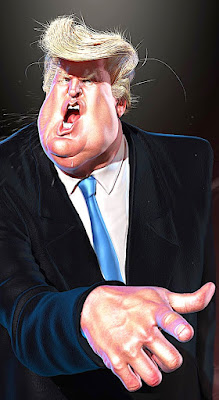 Bottoms up
From rock bottom approval ratings to adverse
advisors, President Trump must be struggling
to keep his historically swelled ego intact. At
this point one would hope that he has learned
that bravado isn't all thats required to govern
this nation. Or wonders if all of the drama of
his realty television administration is worthy
of his favor. Misstep by misstep the Donald
seems to have lost his way. Yet we've no idea
whether said detours are caused by his lack of
direction or those who are supposed to guide
his way. Hence fair or not, we all must judge
our new president by the company he keeps.

Faithful companions
Oddly to me the recent confusion and consequent
delusion seems all too familiar. To many the idea
of our new President behaving and acting like a
businessman is quite appealing. However having
weathered many unsteady transfers of leadership
in the business world myself, I am assured that
what we're witnessing in Washington is anything
but abnormal. In my experience most corporate
takeovers involve intrigue, arrogance, surprises,
and not so calculated risks. Most new leaders
enter the fray in the company of an entourage
that is inexperienced, ill equipped, and adverse.
Hence change becomes a dog eat dog situation.

"Us" versus "them"
Inevitably during a change of power everyone
must take sides. Almost any successful person
assumes that they can improve any situation
by leveraging their knowledge and experience.
In theory most incoming regimes have had a
bit of time plus limited information on which
to base their opinions. However post gaining
access to actual data, people, and perspectives
almost any initial strategy should be cautiously
re-evaluated. The problem is changes to prior
posturing can be viewed as signs of weakness.
Hence rather than search for truth, most new
comers fight to protect THEIR status quo.

Alternative facts
Whether it's a corporate takeover or Presidential
election, winning teams naturally feel they are
entitled to their opinions. Entering into an alien
culture filled with unknown enemies creates a
distorted sense of camaraderie. Such warped
empowerment nurtures a culture where nobody
matters except the inner circle. Thus many feel
that whatever rules existed prior do not apply
to them. The result being a period of trial and
error that can lead to confusion, disruption, or
disaster. Yet as recent events prove, all of the
maligned checks and balances that are part of
our government are now serving their purpose.

In like Flynn?
In business many lie and get away with it. In
fact deceit and subterfuge have fueled many
an senior executive's success. Most Americans
would probably say the same about politicians.
However recent events in Washington seem to
indicate that our government structure insures
a base level of freedom and justice for ALL.
Hence I'm cautiously optimistic that even in
the most adverse of new administrations - the
American way will ultimately show us the way
to a better place. Meaning that soon many who
are currently high and mighty may be down
and out and looking for new jobs in RUSSIA.
Posted by montanaroue at 4:00 AM