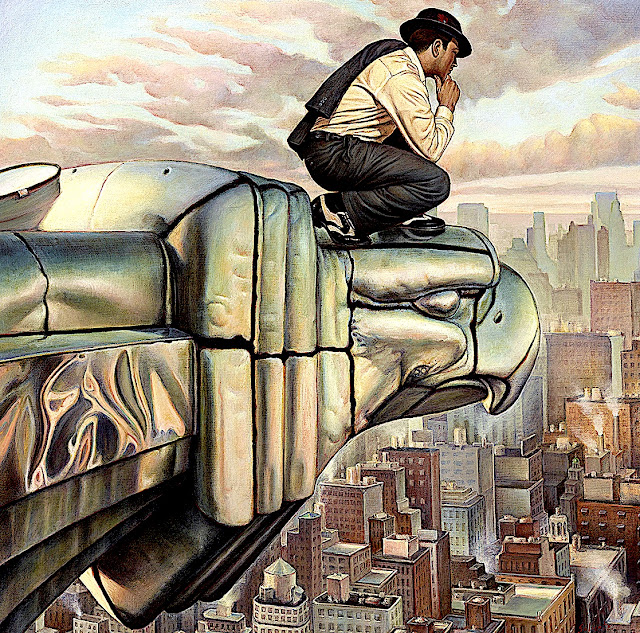 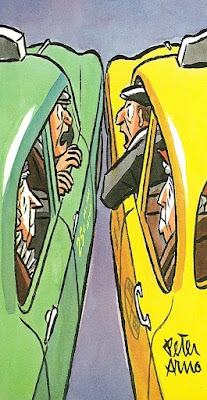 Strangers in paradise
Re-entering the urban scene has been a mixed
blessing. I must admit that I'm enjoying being
back amongst my people. By our very nature
city folks are a rather colorful lot. Everything
one does within the context of Manhattan is in
essence a group effort. Hence some find that a
buffer is necessary between "us" and "them".
Therefore when forced to live en masse, each
of us tries to set ourselves apart from the rest.
Thus one bumps into an awful lot of what in
the old days my father considered "characters."
Proving that here in the big apple, eccentricity
is alive and well. And kicking and screaming! 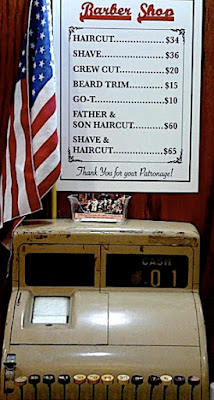 A cut above
Today I went to my barber. An old fashioned
chop shop, "Little Tony & Igor Be Good" is
a classic. An unpretentious remnant of times
past. Upon entering the joint I immediately
noticed a rather "fussy" customer seated in
the chair before me. Said over pumped and
plucked young man was constantly asking
for additional nips and tucks. Finally when
his coif was up to his standards, he gazed
in the mirror and said "fabulous." However
when advised his cut cost $35 he suddenly
seemed to change his mind. And before the
rest of us launched into a BIG conniption fit.

Split hairs
Long story short, he ultimately talked his way
out of paying for his haircut. Mostly because
everyone in the joint was sick of listening to
him. Finally the owner told him to leave. And
post his departure we all agreed that he never
intended to pay. Instead we had all witnessed
the ultimate in command performances  - a
classic scam short and sweet. Soon everyone,
the owner, staff, and patrons had a good laugh.
Our subsequent over tipping more than made
up the difference. And ultimately karma will
most certainly take care of such a vain young
criminal. Hair today... GONE tomorrow! 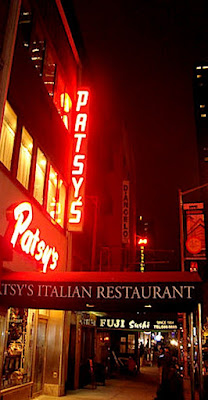 Cold comfort
The victim of a rather bothersome cold, I've
been staying close to home. However by
last night I needed some comfort food. A
few blocks over is Patsy's - a classic Italian
place that's been around forever. Filled with
tourists and suburbanites it's not one of my
usual haunts. However all I wanted was
a martini and some veal so I walked over.
Soon I was ensconced at the primo table in
the downstairs room as men in white coats
fawned over me. Nearby seated in a corner
booth was an overtly amorous couple who
couldn't keep their hands off each other.

All together now
Hand to hand combat aside, what was most
surprising was that they were in their early
sixties. Thus their love fest not only warmed
my heart but reminded me that theres still
plenty of life left in us old folks. Soon my
waiter was winking and shortly thereafter
he said "they make me happy and trust me,
I ain't been happy for a long time." Quickly
my faith in mankind was restored as he railed
against our new President and his co-horts.
In the end his political diatribe, my kissing
cousins, and petty crime reinforced that I'm
back where I belong. I LOVE NEW YORK!