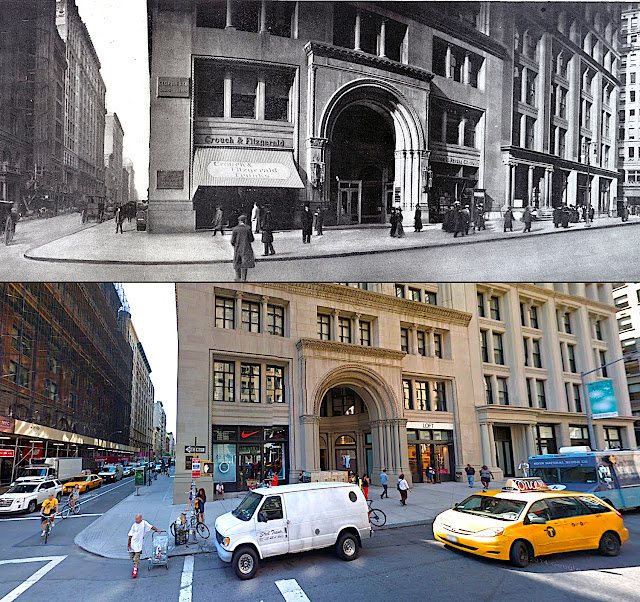 Sooner or later
After living in rural Montana one may assume
that my move back to Manhattan has brought a
shift to modernity and sophistication. However
that's really not the case. While one's options
are limited in Lewistown, almost every modern
convenience is readily available. If nothing else
being small enables such a community to be a
bit more nimble. Hence beyond a lack of HD
cable, we've wanted for nothing. Post the advent
of the internet the world is now at our fingertips.
Which only emphasizes the inconveniences of
urban life. At times progress is actually much
slower here... than there. Nothing is ever easy.

Been there done that
A mega metropolis such as Manhattan is limited
by it's size and scope. Thus creating or revising
almost anything within such a limited arena is
harder than one might expect. The original Dutch
settlers on this island arrived in 1609. Since then
this city has been in a state of constant evolution.
While we have easy access to the most modern
of conveniences, many urbanites must make do
with what they've got. Hence living in America's
largest city can  be akin to taking a journey back
in time. It's a place where the past tenuously
coexists with the present and future. In fact we
often walk rather than ride. It's simply easier...

Under cover
Everything is challenging within such a constantly
evolutionary metropolis. The new Second Avenue
subway recently opened with much fanfare. Yet
one must note that it took one hundred years and
four and a half billion dollars to add three stops.
Did you get that? Just three new stations. I use the
subway to get everywhere. While quite effective,
it's filthy and depending on what line you take -
teetering on the edge of decay. Maintaining such
a massive mode of transportation is a staggering
responsiblity. Which is why things change very
slowly here in the city that doesn't sleep. Or not
at all. Thus we compromise on a daily basis.

Multi-tiered strategy
Keeping up with modern technology is beyond
cumbersome when it's tethered to an antiquated
infrastructure. State of the art when originally
built, much of the resources that we city folk
depend on are ancient, obsolete, or hidden. Thus
the sudden failure of a nineteenth century sewer
pipe can sever your services. Every inch of this
city os built upon multiple levers filled with a
complex network of technology - new and old.
All of which is pushed to it's limits on a daily
basis. Hence millions of New Yorkers interact
with the good and the bad while expecting the
worst. And you wonder why we're tough!?

Deja vu
Some may find such inertia hard to believe.
However from the very beginning this city
has been in a perpetual state of evolution.
Buildings go up and come down frequently.
Yet the majority of Manhattan remains much
as it was when I was a boy. Well, except that
it's safer, cleaner, and smells a hell of a lot
better now. If nothing else advanced age and
vintage are considered a key differentiator
between "us" and "them." Meaning that the
most important words to some New Yorkers
of a certain pedigree are "pre-war." Hence
while location is key, old is better than new. 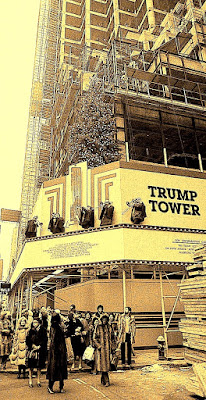 Spin cycle
There was a time when I would have done
anything not to live in a new building. The
ultimate expression of nouveau riche was
when Donald Trump destroyed several key
landmarks to erect his glitzy tower on Fifth
Avenue. However he wasn't the first to do
so. Fifty years before those same beloved
structures had replaced millionaire's homes
as commerce marched up the avenue. As
they had displaced "country" estates prior.
Time perpetually marches on in Manhattan.
Yet even today, the size and scope of prior
baggage insures that old still trumps new. 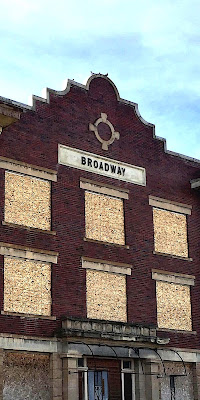 History lesson
All of this is a reminder of the reasons why
my approach to thinking is quite different
from most Montanans. In Lewistown many
consider our historical downtown a liability
rather than asset. Hence renovating rather
than razing is deemed foolhardy. Such a
perspective makes sense given Lewistown
is surrounded by thousands of empty acres.
However the majority of those old buildings
were built in a manner that nobody could
afford to match in today's economy. Why
can't we leverage our aged assets to their
maximum potential rather than reject them? 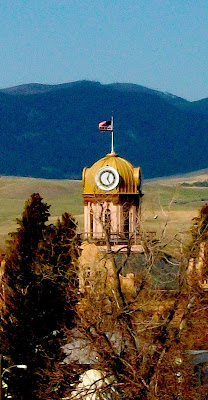 Back to the future
Almost everyone lives in a state of suspended
animation. Our past fuels our present and...
future. We are an amalgam of experiences.
Therefore we're a walking dichotomy of old
versus new. Change for changes sake isn't
necessarily a good thing. If it's broke, don't
fix it. Therefore why waste time and money
reinventing places, processes, or people that
are still viable? Not everything in the city is
inappropriate for those way out west. Could
it be that the residents of Lewistown might
learn something from we city slickers? Be
thankful for what you've got and protect it!
Posted by montanaroue at 4:00 AM