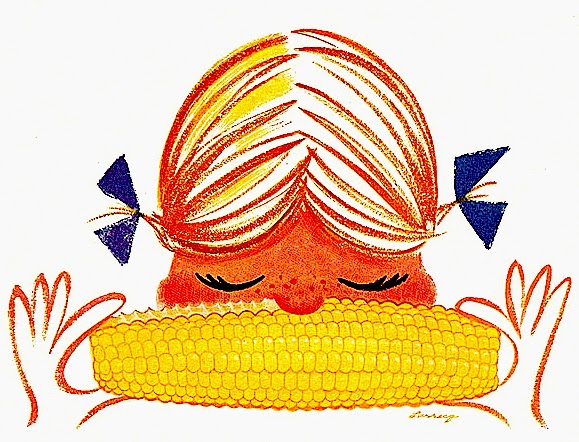 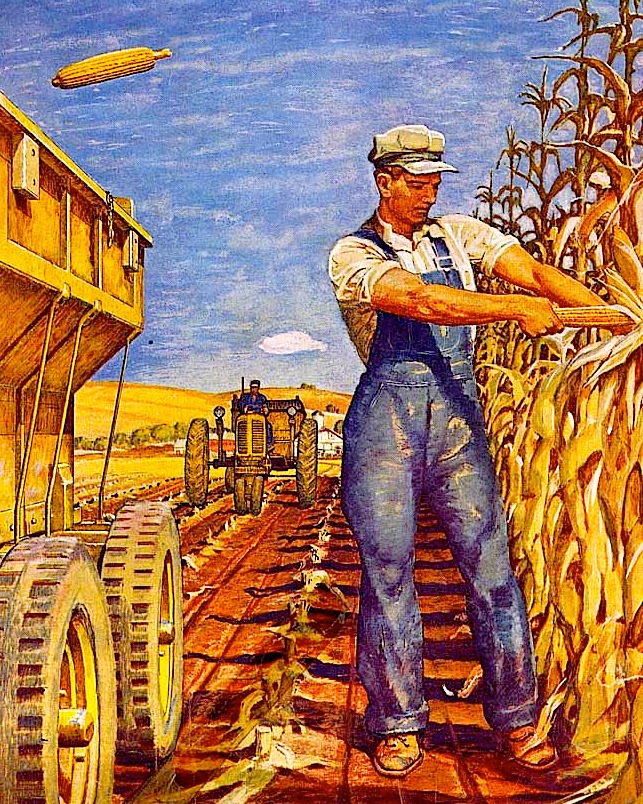 Love at first bite
Yesterday was the last day of
summer and in honor of that sad
day I must chat about CORN.
While many consider this tried
and true foodstuff reprehensible,
this boy adores it! What could be
better than nibbling on a freshly
picked ear? The result is a savory
sensation that as my Mother used
to say is "just like eating sugar
beads." Given few other edibles
match corn for it's historical role
in Americana, why not love it? 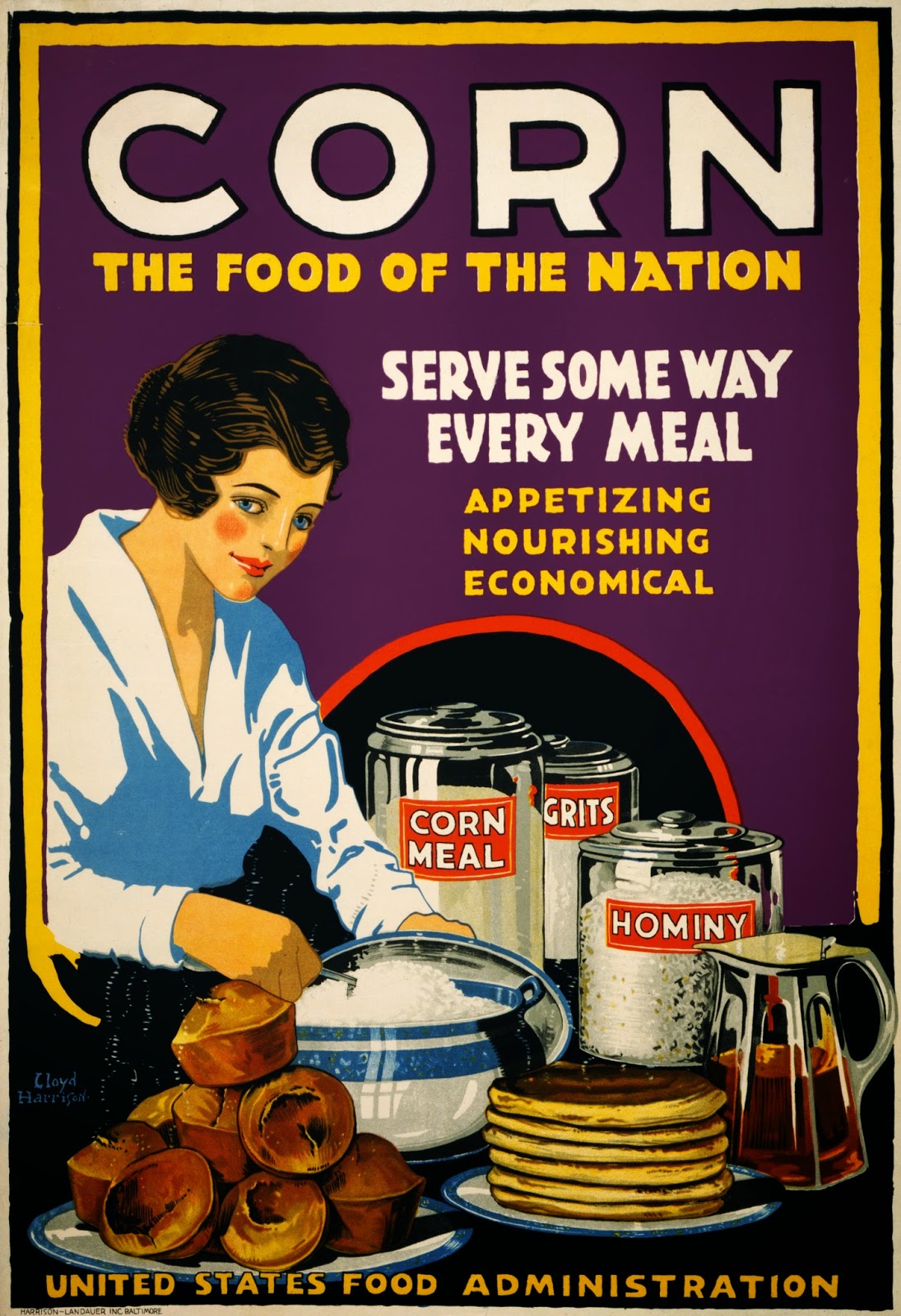 Corn fed beef
Somewhere along the way corn has
gotten a bum rap. As someone who
grew up in a house where bottle of
Karo syrup was often used, I find
all of the hoopla a bit disconcerting.
My generation grew up on canned
vegetables and over cooked protein.
Hence most nutritional benefits were
long gone before we ever ingested
anything. Miraculously we survived
and now many of us are consumed
with what we consume. Be it organic,
natural, whole, or raw it's the fad! 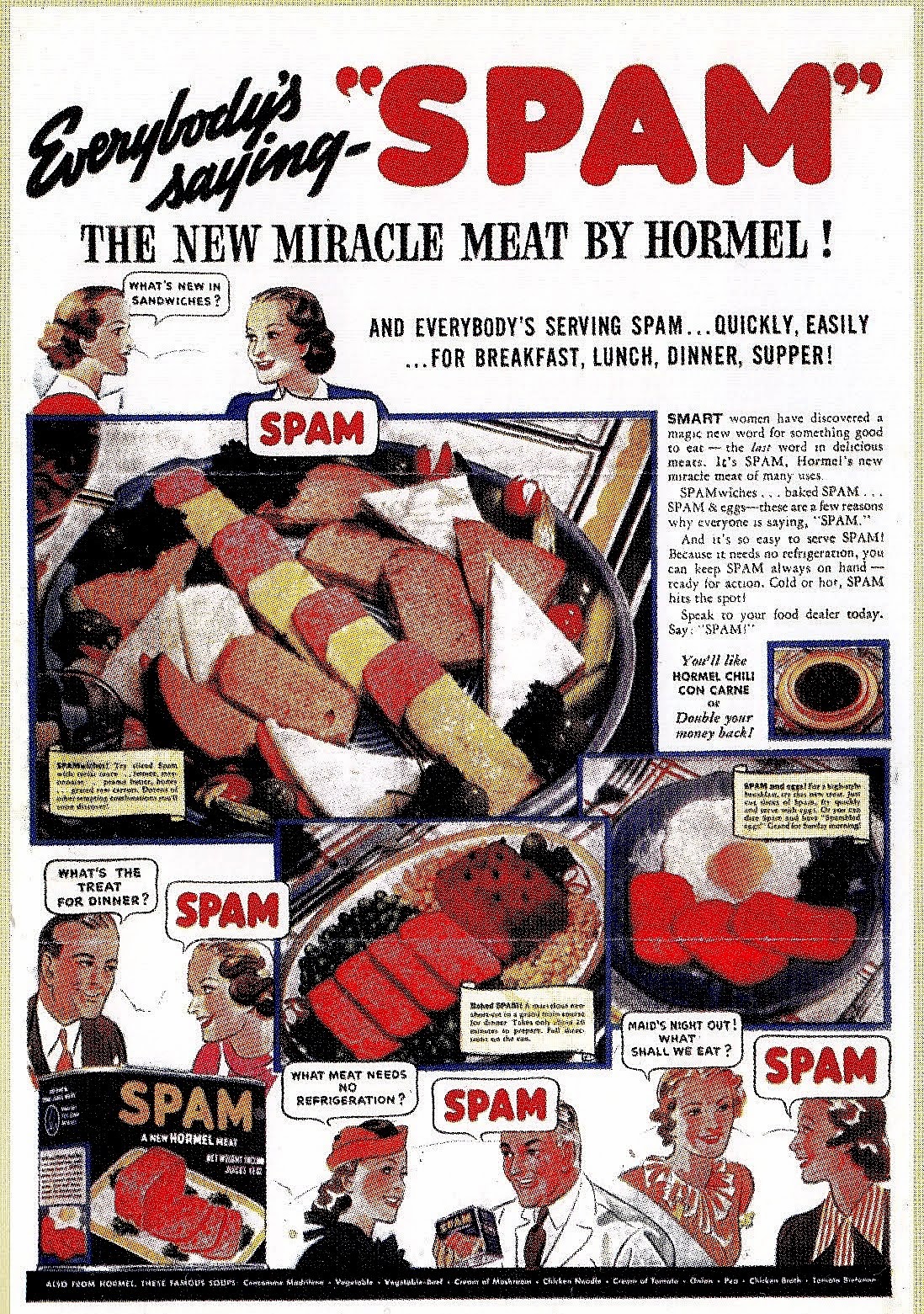 Au natural
Few of us realize that in essence our
drive back to nature is actually elitist
at best. Come on... admit it. When
you're buying that freshly baked loaf
of organic seven grain bread who
doesn't feel a bit superior versus the
poor slob purchasing Wonder Bread?
Don't get me wrong - I'm as against
processed foods as the rest of you.
Honestly, just because one prefers
Brie to Velveeta doesn't make one a
member of some super race. Nor does
it guarantee you'll live any longer. 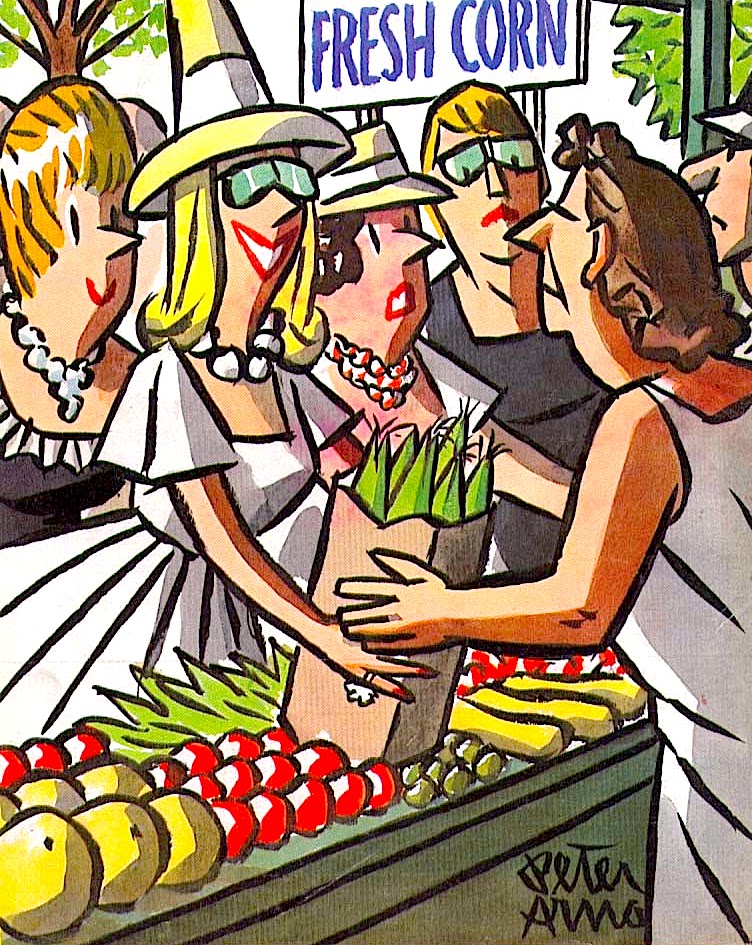 First nibs
I hate to be corny (had to do it)
but Ethel adored corn. Spring
was spent in anticipation of
summer's bounty. The first day
those tender ears were available
at the farm stand, Mother was in
line. She intimately knew every
variety given she had taste tested
each and every one. Even when
the sign prohibited fondling ears,
Ethel ripped into them at will in
order to find the perfect harvest
to husk, boil, and butter at home. 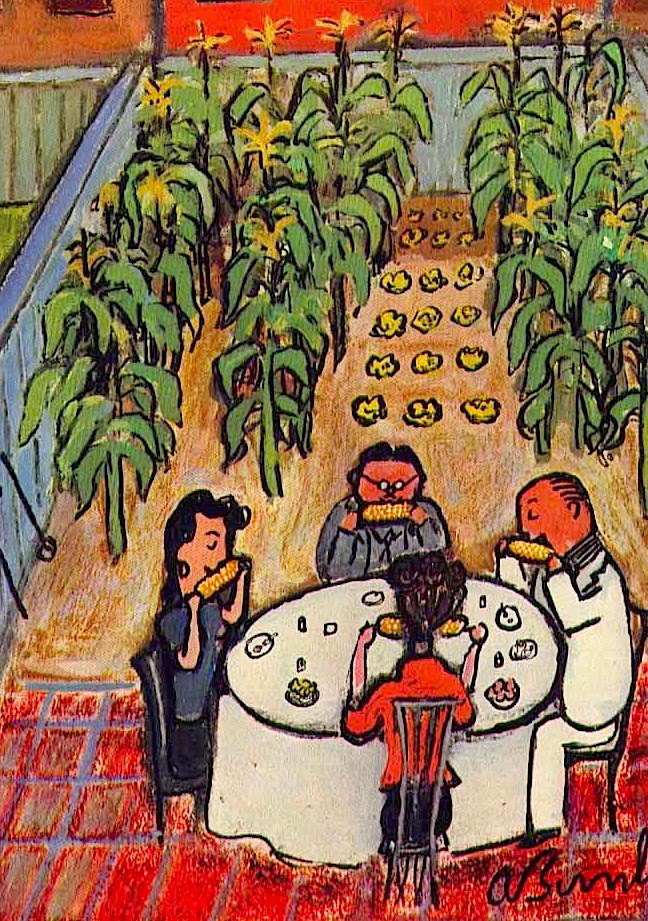 Row by row
Ethel could consume at least a dozen
ears at a sitting. Normally the type to
eat an artichoke with a knife and fork,
she had no problem whizzing through
ear after ear like a teletype machine.
Lathered in butter and heavily doused
in salt, she cared little about the mess.
That's because Mother always tied an
apron or dishtowel around her neck
prior to digging in. While quite out
of character, I must admit those may
have been some of her happiest times.
Talk about grinning ear to ear... 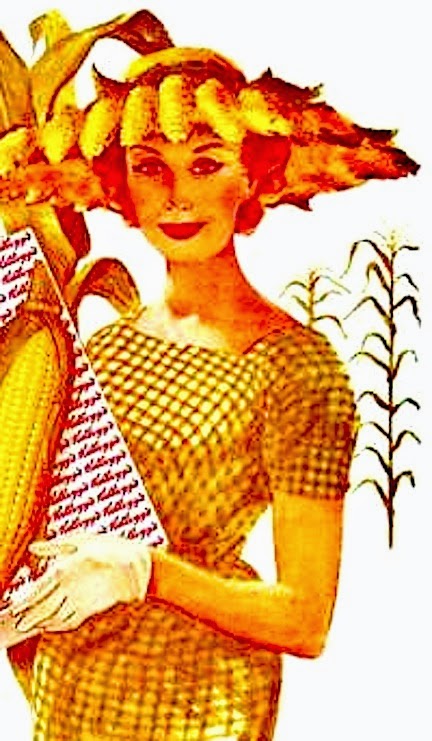 Corn fest
Corn was always on our menu. In our home
the frozen variety was eschewed in favor of
canned. If you've never enjoyed a fluffy corn
pudding, you've no idea of what you've been
missing. Corn fritters sautéed in butter in a
cast iron skillet? Paradise on a plate. Ethel's
creme de la creme was creamed corn made
from equal parts of butter, cream cheese, and
niblets. For breakfast Mom LOVED a bowl
of corn flakes, covered with sugar, drowned
in heavy cream! And then corn bread with a
dab of butter on every bite. There's nothing
as good as good old fashioned calories! 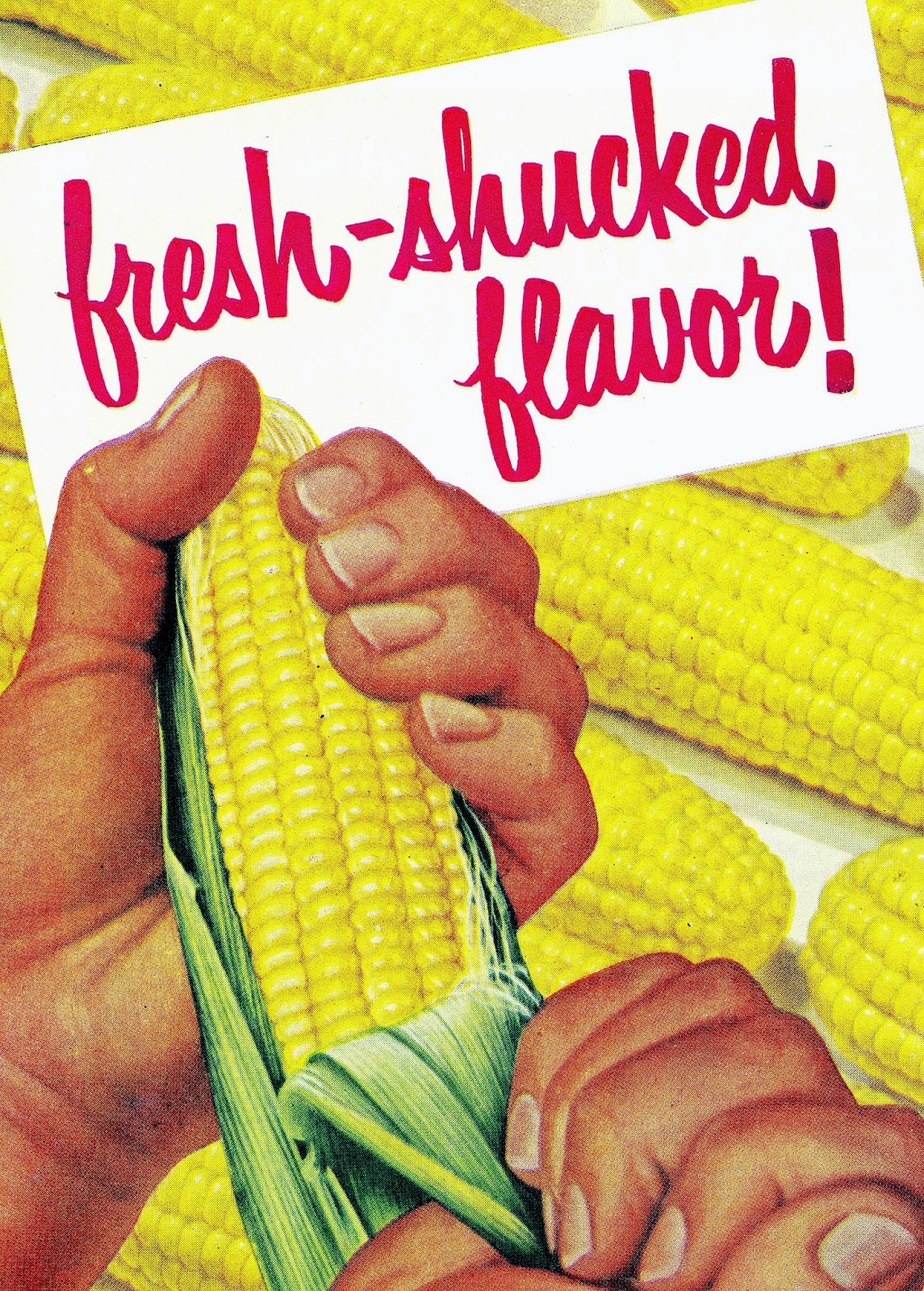 Aw shucks
As she aged, Ethel's teeth were fairly
uncooperative. Thus it fell upon me
to delicately slice summer's bounty
off the cob so that Mother could still
dig in. Oddly watching her shovel
down those niblets may be among
my fondest memories of Mom's later
years. All of her bitterness magically
disappeared and once more life was
good. Maybe that's why I've eaten
so much corn this year. You see, I'm
truly happy and given life is short...
why not have another ear or two? 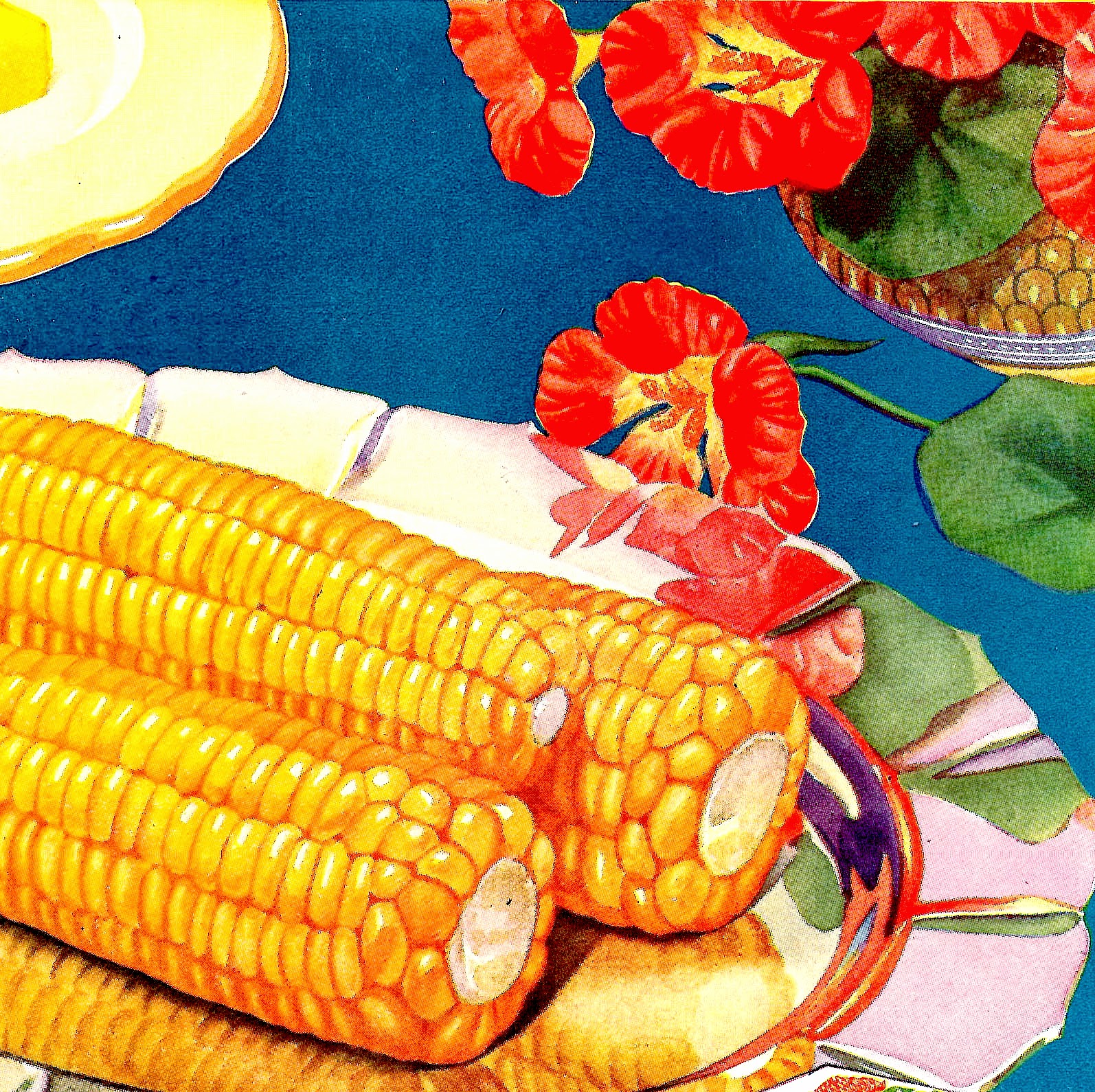