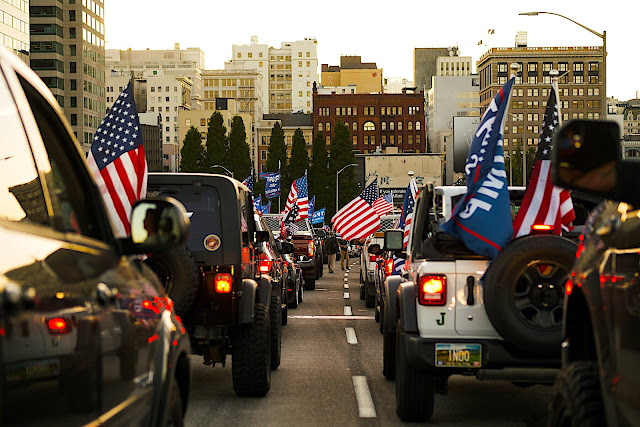 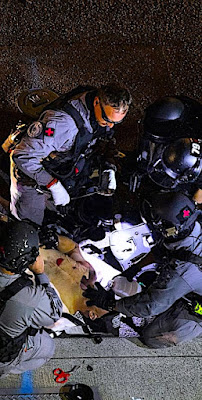 A shot in the dark
Rarely do events far from Lewistown actually
strike home. In part because we are isolated
and thus buffered from the bulk of what occurs
elsewhere. Then I saw images of the Trump
supporter road rally in Portland. You know,
the one that led to the horrific shooting death
of one of Mr. Trump's followers? Which the
President claimed was "peaceful" as his fans
shot paintballs and sprayed mace at those
who disagree. So what struck a cord? It was
pickups sporting American and Trump 2020
flags. Exactly like the one that drives by my
house here in Lewistown on a daily basis. 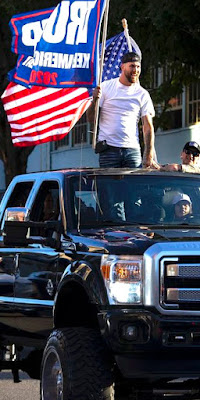 Pickup line
Almost every day a quite large (and expensive)
pickup driven by a young man speeds up and
down Boulevard. Obviously violating both the
speed limit and decorum. Hanging from poles
affixed to the back of its cab are two massive
flags - the stars and stripes - and another one
expressing his support for Mr. Trump. Making
sure that there is no doubt as to where he stands.
What's disconcerting is that there is an element
of aggression to his daily drive by. Maybe I'm
paranoid but from his expression and demeanor
it's almost as if he wants to pick a fight. As if he
is looking for somebody - anybody to spar with. 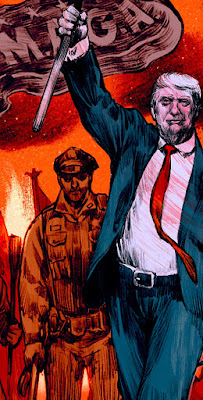 The biggest loser
Never before have I felt this way about an
ordinary American. Well, not at least when
it came to a difference of opinion. For all
of my life folks have freely posted signs in
support of their chosen ones. Agreeing to
disagree given our right to vote for anyone
we chose. Somehow in this age of derision
and division that decorum has disappeared.
In its place is a state of complete hostility.
An element of aggression that if nothing
else is unnerving. Which has me more than
worried. What happens if they win or lose?
Will we ALL lose in the process? And what?
Posted by montanaroue at 4:00 AM