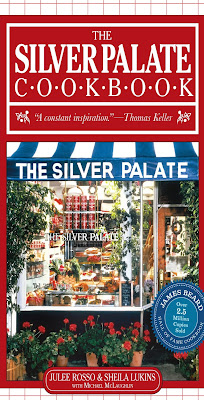 Lessons learned
Like most folks, I'm a self-taught cook. Hence
my formative culinary journey was driven by
a variety of tried and true tomes. Julia Child's
dual French cookery volumes having the most
influence. Yet as time went on, I continued to
learn as I dished it out. Finding my recipe for
success sometime in the mid eighties. Making
a repertoire of dishes that I served frequently.
The majority of which came from what became
my epicurean bible The Silver Palate Cookbook.
And for years thereafter said venerable dictums
insured that I successfully fed thousands. All of
which were fresh, fast, and simply YUMMY! 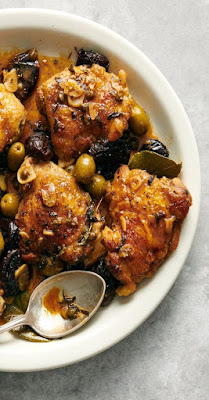 Off the menu
Sadly even the best of us become bored with
life's bounty. Assuming that what has become
quite familiar is boring at best. Instead opting
to experience all the life has to offer instead
of cherishing the tried and true. Leaving old
friends for new. Only to later bump into some
blast from the past and wonder why you ever
left them behind. That's what happened last
night when I prepared and served "Chicken
Marbella". A seemingly exotic melange of
poultry, garlic, oregano, olives, capers, and
prunes. Which actually hails from the all too
familiar upper Westside of my youth. 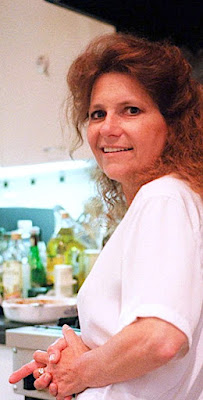 Friends forever
Back then Sheila Lukins crafted this purely
American pastiche of Mediterranean and
Moroccan influences into one tasty dish.
The end result being not only easy to make
but both foolproof and affordable. Best of
all, it's even tastier the day after. So back
to Saturday night. Post serving this dish
Frank commented that I had never made it
for him before. Which reminded me that
I hadn't served this favorite in over twenty
five years. Proof that things long forgotten
are best remembered. Along with being
reminded that old friends never disappoint. 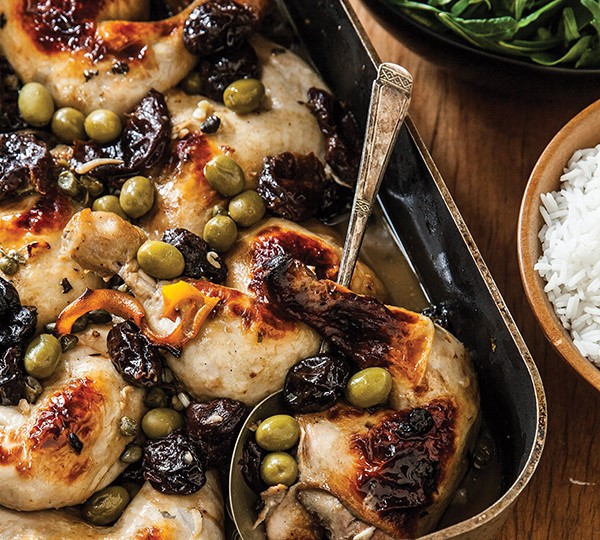 The morning of -
Set marinated chicken out at least two hours
before cooking to reach room temperature -trust me...

Bake at 350 for one hour
I often go ninety minutes.
Baste frequently - It's worth added the time and effort.

Serve and enjoy
Let it sit for at least fifteen minutes.
Sprinkle with chopped parsley or cilantro.
I serve this a la buffet straight out of the baking dish.
But if you want to be fancy -
Transfer the chicken, prunes, and olives to a platter via slotted spoon.
Serve the pan juices in a gravy boat on the side.

Sooner or later
Much like coq au vin, this dish is better the day after.
So feel free to prepare and then store in the fridge.
Reheat at 325 degree for thirty minutes.
This dish is equally fabulous "cold" - as in room temperature.
So post putting it on ice,
sit it out at least ninety minutes prior to serving.
Posted by montanaroue at 4:00 AM