Private compartment
My parents had wanderlust. Given I arrived
late in their lives, Dad had plenty of vacation
time. Hence every few months we'd load up
our station wagon and be off. In those ancient
times long before seat belt enforcement, my
domain was the rear compartment. There I'd
hunker down for the long haul amidst pillows,
throws, games, books, snacks, and my cassette
recorder. All of which guaranteed my comfort
and entertainment while in transit. However
my audio accomplice was my most favorite
traveling companion. And together we sang
our way across the eastern half of the USA. 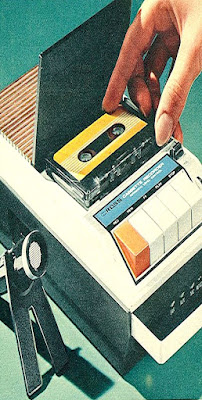 Reely I did
Before any such journey - I would lay before
our TV recording movie musicals. Not upon
video (said technology did not exist) But via
the microphone of my trusty cassette recorder
propped atop some books in front of our TV's
speaker. Carefully flipping it's on-off switch
to insure a commercial free tone. Subsequently
I listened to these homemade audio broadcasts
as we navigated up and down the east coast on
family vacations. Memorizing each and every
lyric along the way. Until I had assembled the
equivalent of a musical archive inside my head.
So chances are... I CAN NAME THAT TUNE!

Hello gorgeous
One of my favorites of those recorded entries
was (and remains) Hello Dolly starring Miss
Barbra Streisand. While said film won several
Academy Awards - in my opinion it pales in
comparison to other classics such as Singing
In The Rain, Funny Girl, Gigi, or Gypsy. Yet
somehow my inner queer deeply connected
with both Barbra Streisand's voice and Jerry
Herman's music. Over the years I continued
to add many other musicals to my cassette
repertoire. Which along the way insured that
a never ending soundtrack endlessly plays on
and on deep within me. And yes, I hear voices.

Virtual reality
In hindsight it's hard to believe that anybody -
myself included - ever attempted (and for a
time succeeded) in ignoring the fact that I'm
gay. Denials aside, my parents supported my
"creative" tendencies. Therefore I was free to
pirouette in my skivvies in the living room to
Mantovani's rendition of Fascination. Within
such a cocoon I had no idea that I was any
different than the other boys. That is until I
met the real world face-to-face. Via school
yard bullies who somehow knew the truth
that my family and I could not acknowledge.
Talk about the school of hard knocks...

Showtime
My subsequent journey from there to here has
already been chronicled in this blog. However
suffice it to say said process of illumination
has made me the man I am today. One who is
most fortunate to share his life with another
gentleman of similar proclivities. Beyond the
bedroom we share many passions including
musical theater. Therefore it should come as
no surprise that over the years we've had the
pleasure and privilege to see some of the best
Broadway performers of our generation. All
of who not only entertained us - but somehow
touched our hearts. And changed our lives.

The stuff that dreams are made of
Oddly enough, few men have made a lasting
impression. Beyond Tom Wopat in Annie Get
Your Gun oe Douglas Hodge in La Cage Aux
Folles they are all forgotten. Whereas many
ladies - often pure and simple broads literally
stole the show to remain vividly ensconced
in our memories. We've seen many legends.
Including Elaine Stritch, Bernadette Peters,
Patti Lupone, Chita Rivera, Barbara Cook,
Eartha Kitt, Glenn Close, Christine Ebersole,
Helen Mirren, and many more. All of whom
not only entertained us - and left a lifelong
impression. Especially the divine Miss. M. 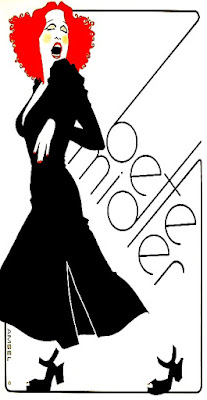 Friends forever
Some performers are constant influences in
one's life. Looking back - Bette Midler has
always been there. Long before I even knew
what a bathhouse truly was, Bette ruled the
Continental Baths on the Upper westside.
Who didn't cry at Beaches? And while we
hate to admit it, we all loved her rendition
of "From A Distance." Singing aside, we've
laughed at her performances in such films as
Down & Out in Beverly Hills, Hocus Pocus,
and the First Wives Club. And Frank and I
will never forget her portrayal of agent Sue
Mengers on Broadway in I'll Eat You First. 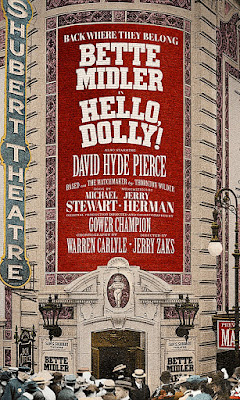 Limited engagement
No wonder Hello Dolly has been on our
list since Bette Midler signed to star in a
revival. Sadly like many Broadway hits
ticket prices were so high that we simply
would not go there. So we waited... and
hoped. Then as fate would have it a quick
internet search found two tickets priced
at normal rates. Eleven days before the
end of Bette's run! Honestly, we couldn't
believe it. So much so that we worried
something would go wrong right up until
we were seated in seats F1 and 3. Stage
right, five rows back on the aisle. 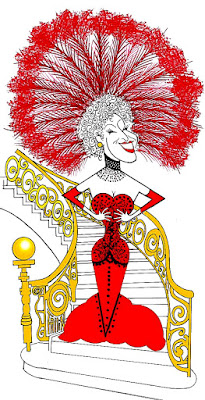 Greatest show on earth
What followed must be described as a love
fest. I cried tears of joy from beginning to
end. From the moment Bette stepped onto
the stage the applause never stopped. And
even if her voice isn't what it used to be -
she rocked the house. However it wasn't all
about Ms. M. David Hyde Pierce gave an
equally engaging performance. And Tony
Award winner Gavin Creel was spectacular
as Cornelius Hackl. Yet in the end the show
itself - the ensemble cast - the choreography,
the sets, the costumes are what enthralled.
To deliver the best show we've ever seen. 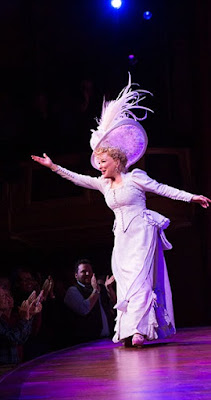 Star power
Live theater can be a life changing experience.
While I knew all of the songs word for word -
they became new when performed by a true
star like Bette Midler. Somehow the audience
and super star connected in a transcendental
way. Last night you could truly feel the love.
Which can be the only explanation as to why
a seventy two year old would be willing to put
themselves through the paces five nights and
three afternoons a week. After watching Bette
bask in her well-deserved glory and multiple
standing ovations -  I've no doubt she'll return
to Broadway again. ON WITH THE SHOW!