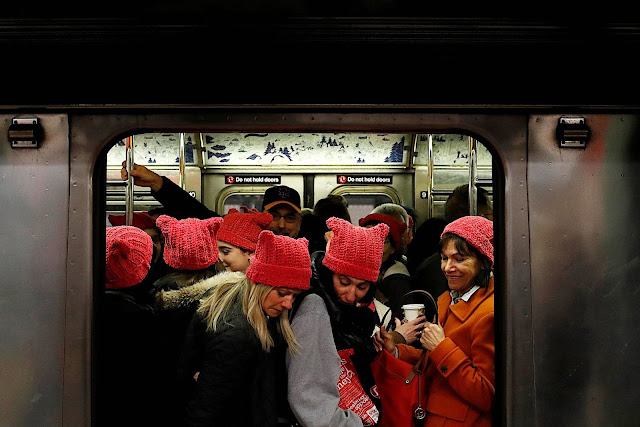 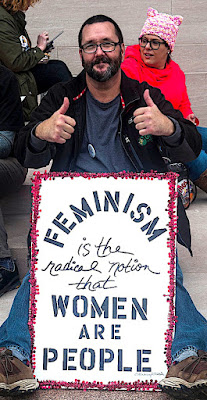 Been there, done that
It's hard to believe that just a year ago Donald
Trump finished his first weekend in office. On
that Saturday a million plus women (and many
men) marched in protest across America and in
key cities across the globe. One year later, one
hundred and twenty thousand marched in New
York. Demonstrating that while twelve months
have passed, many feel that our top dog is not
able nor willing to serve ALL of the people.
Especially those of the feminine persuasion.
Hence our major downtowns were once again
a sea of hand knitted, pink pussy caps. While
beyond amazing - will this make a difference? 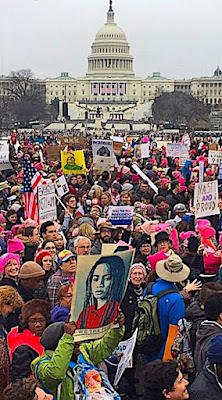 Twelve months and counting
So much - yet so little has changed in a year.
Most our fears have been affirmed. Or have
increased to crisis levels. Racial discord has
not improved but increased by the acts of the
President himself. Campaign promises have
come and gone as Washington swirls. Due in
part to an ongoing investigation into Trump
team links to Russian influences. All as the
EPA have been hobbled - only to sink back
to prehistoric regulatory levels. Illegal aliens
and muslim immigrants have been targeted
for persecution. And then of course there's
the antics of "Rocket Man" i.e. Kim Jong Un. 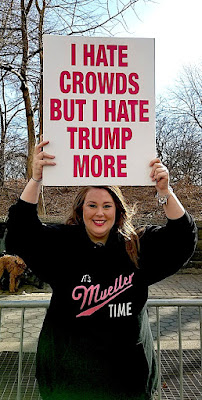 Haters gonna hate
Our government shut down on the anniversary
of Mr. Trump's inauguration. In part because
some preferred to hold the "dreamers" (kids
of illegal immigrants) hostage in the budgetary
process. Meaning Donald was unable to attend
a $100,000 a couple gala in his honor at Mar a
Lago in Palm Beach. Which seemed more than
fair. I wonder if he could hear all of those pink
protestors in his neighborhood? Inane tweets
aside - what does our President really think of
all of this? Obviously he has to realize that he's
probably the most hated president in history.
But does a megalomaniac like him really care? 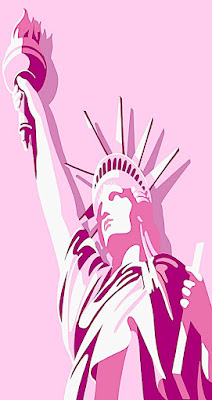 Exercises in futility
Ego aside, the man himself is irrelevant. Our
problem is the gaggle of fools that we elected
to represent our interests. Those sitting on the
left couldn't elect a president. Hence the mess
we're now in. Those on the right outnumber
their blue counterparts yet are unable to drive
the process that they historically maligned.
Thus dramatic rifts, schisms, and antics have
rendered them useless. With the exception of
the new tax laws - they've yet to accomplish
anything except orchestrating a public circle
jerk. One which has been unable to reach
a climax let alone provide any satisfaction.

No longer silent majority
So, what do we do about it? I suggest we look
to the ladies for inspiration. Within a year they
banded together. Standing up against sexual
discrimination en masse. No longer silent, they
are eloquently exposing secrets long held and
sadly condoned. If their bravery isn't enough -
many other Americans have joined them in a
chorus of shock, disdain, and protests. Does
that mean that all of us hit the streets in pink?
Looking, listening, and learning from events
on Saturday - I clearly got their message. And
that is that our most powerful weapon is our
VOTES THEMSELVES. Every one counts! 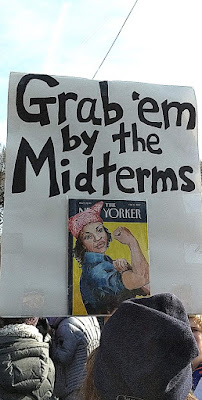 Half and half
Somehow we've forgotten that these idiots -
those who support closeted bigots and pious
power brokers - actually WORK FOR US.
Therefore it's their job to do our bidding.
That is as long as we let them know exactly
what we want of them. Active engagement
in the electoral process insures that every
voice is heard. Not just those aggressively
promoting skewed priorities. Meaning that
as midterm elections loom on the immediate
horizon, each of us has a job to do. Whatever
one believes - we can't assume the odds are
in our favor. Thus we all must cast our vote.

Lowest common denominator
I find the necessity of reinforcing the importance
of engaging in our democratic process beyond
frustrating. Unlike the millions who live in what
President Trump deems "shitholes," we're equal
participants in our governmental process. Yet
unless we engage in said process, we in essence
enable others to usurp our authority, priorities,
motives, and morals. Therefore once again last
Saturday I learned a valuable lesson from my
girlfriends.  Which is that I've nobody to blame
but myself for the mess that we're in. Which is
why it's my responsibility to do all within my
power to insure America is in the pink in 2018!
Posted by montanaroue at 4:00 AM