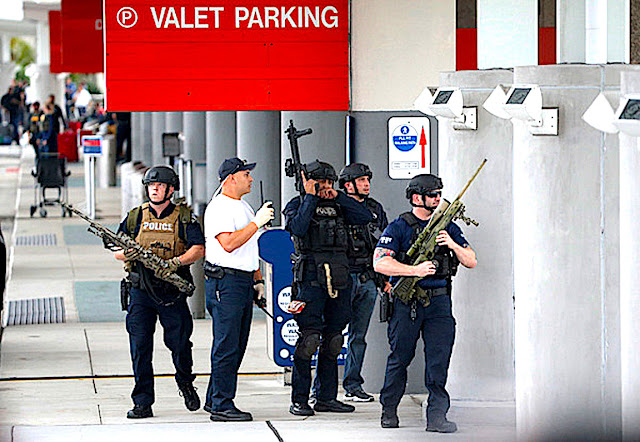 Airport insecurity
It's rather scary these days at the airport. This
morning while I was checking in, a hot group
of NY State Troopers were checking me out.
While normally I rather enjoy the attention of
men in uniform, said review was different this
time. Probably because all four had machine
guns in their hands. Thus I started off this day
literally up in arms. Which reinforces just how
tenuous these times are. In truth it seems that
all of America seems poised on the brink of
some sort of incendiary event. Be that giving
testimony before Senate or navigating through
airport security. Exactly what is going on?! 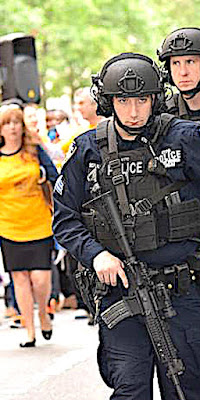 Travel restrictions
Like it or not, lately terrible things have been
happening all over the world. Therefore these
days whenever I'm at the airport I find myself
more worried about being killed than missing
my flight. The same applies to navigating my
own neighborhood. Yesterday was the Puerto
Rican Day Parade up Fifth. Due to my home's
proximity to Trump Tower, West Fifty Eighth
was closed. Meaning that a trip to the local
grocer required passing through a closed line
of defense. Upon return I had to show proof
of residency as my ice cream bombe melted.
Is all of this foolishness all that necessary?

Pop goes the weasel
While certainly a nuisance, showing caution in
these times more than makes sense. Especially
when our enemy does anything but play by the
rules. Living in an aging and crowded city such
as Manhattan makes one feel beyond vulnerable.
Caught in a crowded situation almost anybody
can blow up. Yet historically that has meant a
temper tantrum not a self inflicted combustion.
Thus in times like these one has no choice but
to play by the rules and hope for the best. But
even more important, said uncertainty simply
reinforces that every day, every moment, every
memory is precious. Time is of the essence!

Under armor
Given we've no control over the situation, all we
can do is hope for the best. However we could
hunker down and hide. Growing up in post war
America, kids like myself regularly participated
in drills designed to insure our survival post a
nuclear holocaust. While hiding beneath a desk
wouldn't do much of anything, there were more
credible options. Recently I saw photographs
of a 1960s bomb shelter in Vegas. There twenty
five feet under the turf lies the perfect nuclear
family abode. With a pool, barbecue, and other
mid-century survival tools. Designed to insure
the survival of the Brady Bunch for posterity!

Everyday warriors
Being forced to go underground may seem
like the ultimate of terrorist acts. Much as
Londoners during the blitz we must carry on.
That's the only way to combat such insanity.
While being blown up may not be the best
way to exit the room, laying in a hospital
bed at ninety is equally risky.  Thus where
or when one's number finally comes up isn't
of much concern. Instead we must stand up
for our rights by continuing to do whatever
is within our rights. Hence going about our
business may be the ultimate act of bravery.
So please, keep on doing what you're doing!
Posted by montanaroue at 4:00 AM