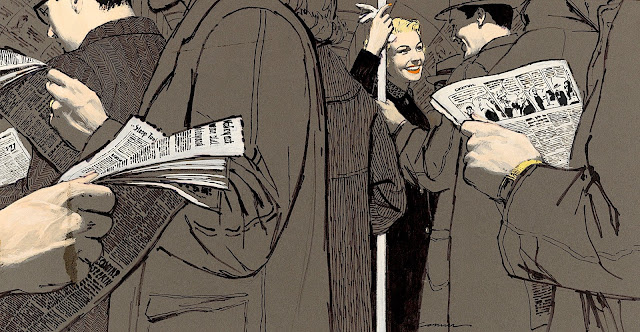 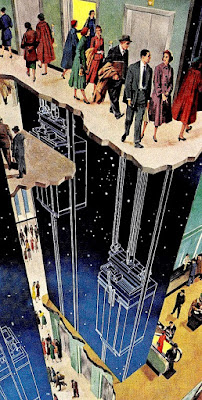 Out of the box thinking
Some say politics makes strange bedfellows.
However I would argue that there are many
other situations that force us to interact with
those we otherwise never mix with. Take an
elevator for example. There are few more
intimate situations that being crammed into
a box with a bunch of strangers. Since it's
inception a set of specific elevator rules of
order have been in place. Thus most riders
avoid eye contact, move to the back, and
abstain from issuing any personal vapors
while on board. All as they pray that they
don't get stuck and can rise to the occasion.

Upward mobility
City life is intimately anonymous. In order to get
along with the rest one must follow the rules of
said road. However often one is adrift in a sea
of lemmings. Slowly we learn how to maneuver.
For example I now know what subway car to
board in order to arrive in front of the escalators
at my final destination. However I don't run to be
the first on their way to upward mobility. That's
because it isn't until after thirty folks or so that
some brave soul finally stands still and ends the
frenetic climbing of said motorized steps. Thus
this man steps aside and waits until he can join
the fray, enjoy the ride, and never sweat it out.

Now or later?
Timing is everything. Hence I prefer to avoid
the rush by traveling anytime but during rush
hour. It's amazing what a difference just five
or ten minutes can make. Therefore a savvy
traveler will strategically board the subway
after the masses have already arrived at their
destination. Better late than never. Which is
why I enter or exit the office off hours rather
than risk running into commuters sprinting
to catch their train or bus to and fro. During
crunch time I prefer to walk rather than join
the sardines on the subway. And I will often
take a few blocks detour to avoid the crowds.

Foreign affairs
We locals know how to behave en masse. Sadly
there seems to be no tome that outlines the rules
of the road for tourists. Therefore it's no surprise
that outsiders get caught in the act or gum up the
works. One can't help but pity sojourners from
Seoul or Saskatchewan when they're going the
wrong way at the wrong time in the WRONG
place. If one must swim upstream the only way
to get where you're going is to PUSH your way
through. Yet such strangers in paradise naively
navigate within a context where the odds are
agains them no avail. Why don't they stay with
their own, ride a tour bus and watch from afar? 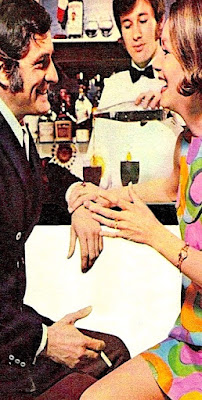 Mixed up
It's no wonder most Manhattanites spend their
free time in self-induced isolation. Post a week
of battling the masses the idea of spending the
weekend in one's apartment is rather attractive.
However at some point we all have to interact
with other humans beings. If left to my own
devices, I belly up to a nearby bar for dinner.
Last night I supped at Marea on Central Park
South. Soon I had a friend on my left and right
who were not only on the town but also on their
own. We chatted about the food, booze, and like
most New Yorkers, real estate. And suddenly
I wasn't alone but rather in good company.

Moving violation
There is safety in numbers. While we urbanites
do everything possible to avoid interaction the
fact is that most of us actually find comfort in
the company of others. Yet even amongst the
throngs one can be incredibly lonely in the city
that never sleeps. Hence some of us may take
advantage of any opportunity to connect on a
one-to-one basis. Don't assume that everybody
wants to be your friend. One must understand
the prompts that signify you have permission
to engage. They can be a cleared throat, side
line glance, or a hello. If and when that happens,
embrace the moment. Then... MOVE ALONG!
Posted by montanaroue at 4:00 AM