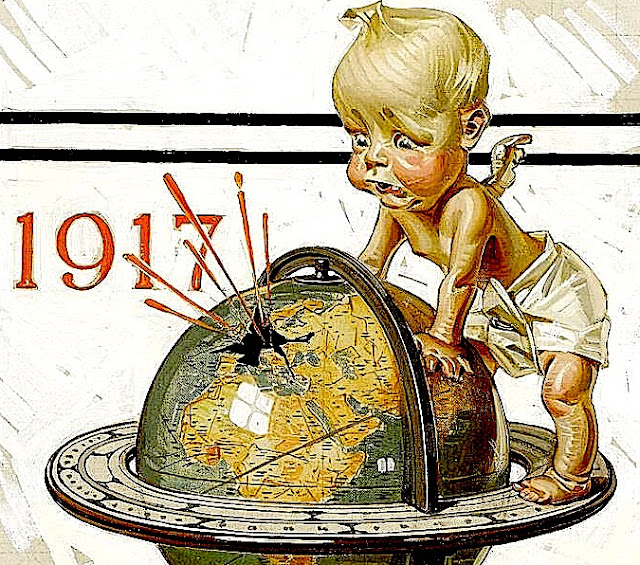 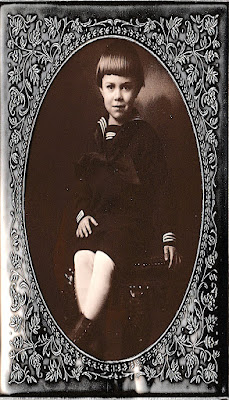 Father knows best
1917 holds a spot in my heart given my Dad
(shown left) was born in that year. If he'd
lived he would be one hundred this August.
However Frank's father turns ninety nine in
June. Having a living link with the past in
the family is an amazing privilege. Frank Sr.
is still as sharp as ever meaning that at any
time he can provide some archaic tidbit that
nobody else would know but him. In honor
of all of our fore bearers, let's start the new
year right by going back a century. Fasten
your seat belts (even if they haven't been
invented.) It's going to be a bumpy ride! 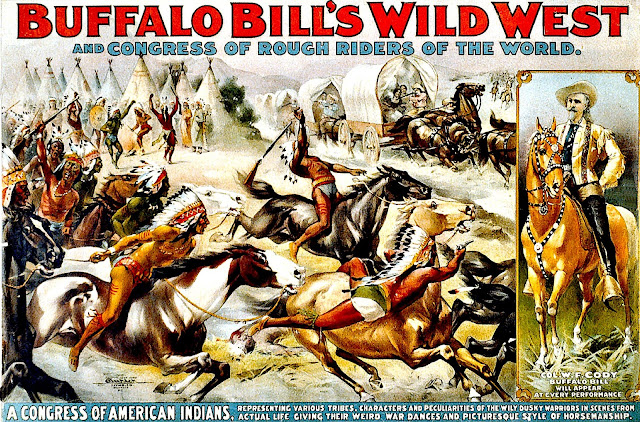 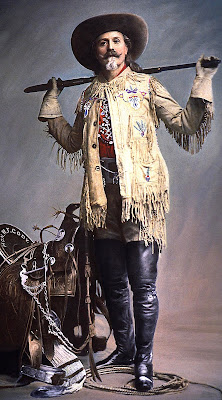 January 10th,1917
Many fantasize about life in the wild west.
However many credit Buffalo Bill Cody
with creating that myth. Born in Iowa,
raised in Kansas, he was a Pony Express
rider, scout in the Indian Wars, and Medal
of Honor recipient. Yet his great passion
was celebrating the western way of life.
Starting in 1883 he brought "cowboys &
Indians" worldwide via a staged show
unlike anything seen prior. Post his death
in 1917, the venerable Buffalo Bill Center
of the West was founded in his namesake
town of Cody Wyoming. YEE HAW! 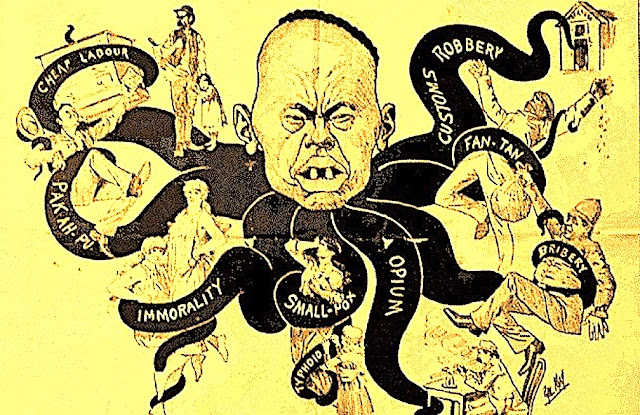 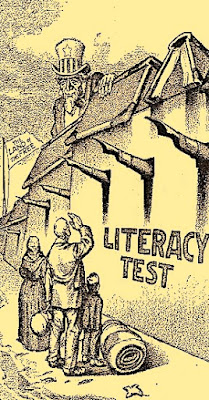 February 5th, 1917
The Immigration Act of 1917 was an attempt
to limit new arrivals to our shores. President
Woodrow Wilson vetoed it due to it's rabid
"nativism." Ultimately the Congress reversed
his veto and immediately implemented laws
that prohibited any illiterate over the age of
sixteen from entering this country. In addition
it barred immigration from much of Asia and
the Pacific Islands. Soon thereafter - pressure
due to World War One led to compromises to
this legislation in order to drive productivity.
One hundred years later, we're about to start
building another wall, will we ever learn?! 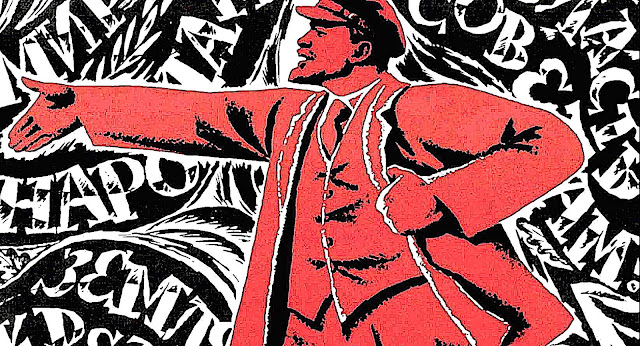 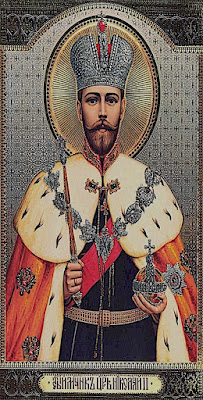 March 15th, 1917
The Russian revolution started with riots in
St Petersburg over the War and food rationing.
Soon anarchy spread as empowered serf's
overtook the elite's turf. Finally the Czar was
forced to abdicate on March 15th. Quickly a
variety of factions vied for control. Finally
a reformed member of the bourgeoisie now
communist named Vladimir Lenin stepped
forward. Fully in control by November he
"temporarily" silenced the free press. Elected
Chairman of the newly formed Soviet Union
in 1923 he suffered three strokes. Ultimately
he died while in office on January 21st, 1924. 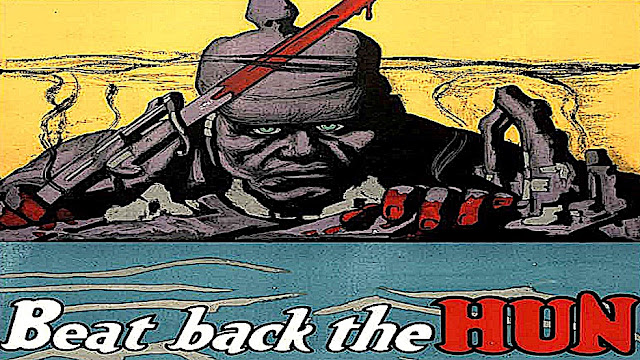 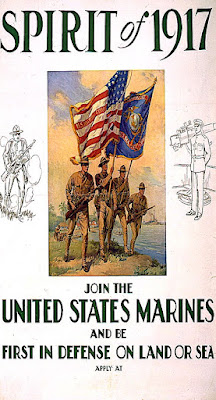 April 6th, 1917
World War One started on July 28th, 1914.
Soon every major world power joined the
battle except the United States of America.
Our country comprised of immigrants felt
it was not our problem. Rather the bulk of
Americans preferred to watch the battle
from afar. Over the next three years even
their safety seemed in peril. And so finally
in 1917 we entered the fray and declared
war on Germany. A late influx of soldiers,
armaments, and technology facilitated a
turn around in the conflict. And nineteen
months later - it was all over. 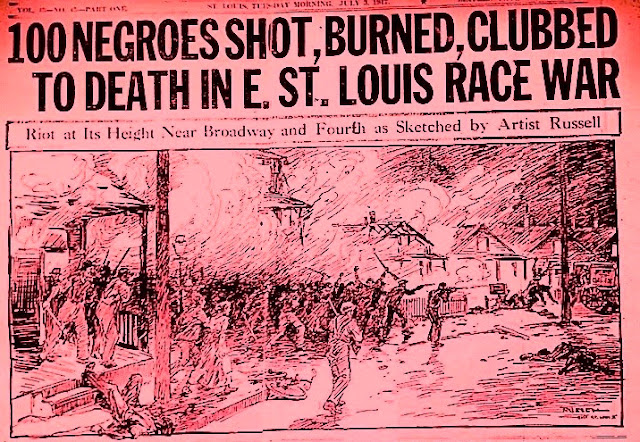 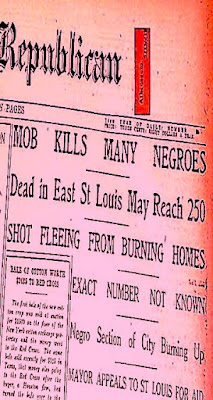 May 28th, 1917
In February over 475 black workers were
brought to East St. Louis, Illinois to replace
whites striking against the Aluminum Ore
Company. By late May anger and racial
tension erupted as 3,000 whites terrorized
blacks throughout the city. On July 2nd the
populace again rioted. Two hundred African
American men, women, and children were
lynched or killed by white mobs. And over
six thousand were left homeless after their
homes were burned. Almost a century later,
Donald Trump won the election in this same
city. Hopefully history does not repeat itself. 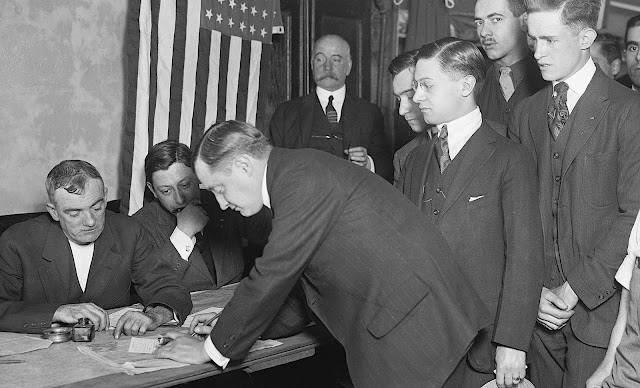 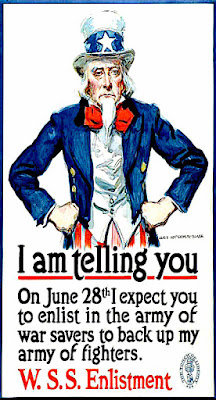 June 1917
This month over ten million American men
registered for the draft. Among the deadliest
conflicts in history, World War One will end
with a total of thirty eight million casualties.
Including seventeen million dead of which
over one hundred and seventeen thousand
were Americans. After arriving late into the
battle, Americans helped end the war to end
all wars in November of 1918. One would
have hoped we'd learned our lesson.Yet by
1939 the world was once again at war post
Hitler's invasion of Poland. Ending in the
deaths of over sixty million worldwide... 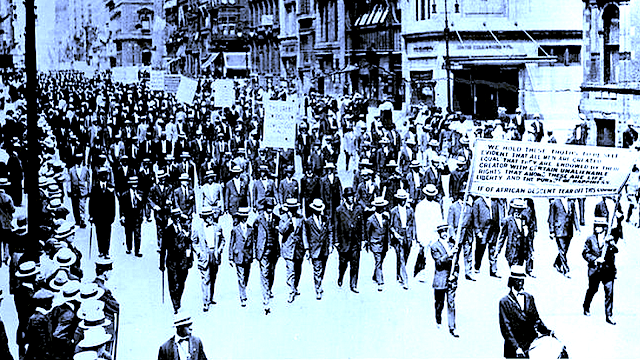 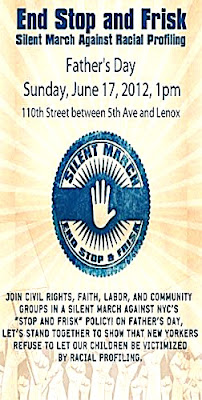 July 28th,1917
In Manhattan a "Silent Parade" was staged to
challenge President Woodrow Wilson to keep
his promise to enact anti-lynching legislation.
Over ten thousand African Americans trod
Fifth Avenue in this the first ever civil rights
protest. In November the US Supreme Court
struck down Louisville, Kentucky legislation
requiring blacks and whites to live apart. In
December thirteen black soldiers were hung
for their role in a Houston race riot. In 2012
a "Silent March" was staged in Manhattan to
protest "Stop and Frisk." A policy of which
President elect Trump still avidly supports. 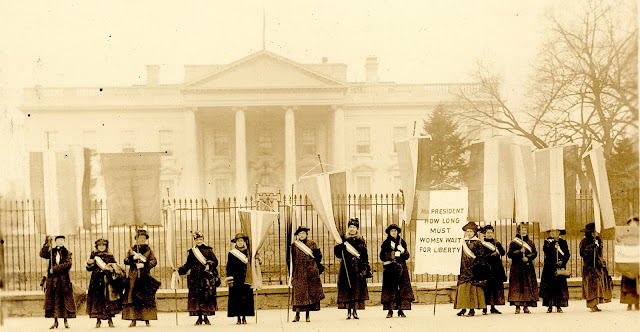 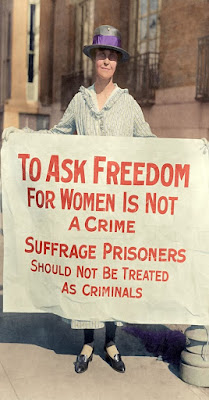 August 28th, 1917
Last year we almost put a woman into the
White House. Yet one hundred years ago
ten women were arrested for picketing the
White House for their right to vote. By
October 27th twenty thousand suffragettes
would march in protest in New York City.
On November sixth New York State gave
women the right to vote in state elections.
Yet again on November tenth, forty one
suffragettes are arrested at the White House.
It would not be until August 18th 1920 that
the Nineteenth Amendment finally became
law giving ALL women the right to vote. 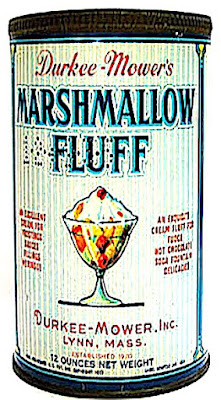 September 1st, 1917
Marshmallow cream was invented by a man
in Somerville, Massachusetts. Subsequently
he sells his concoction to the Durkee-Mower
company who package it under the name
"Marshmallow Fluff." At some point some
unnamed genius happens upon the idea of
layering peanut butter and the fluffy stuff to
create the beloved "Fluffernutter." Today the
original recipe continues to be sold in the
northeast with two other brands covering
the balance of the U.S. Each year the city
of Somerville celebrates it's sweet legacy
at a festival entitled "What The Fluff?" October 15th, 1917
Some suggest that modern morality is sketchy
at best. However the truth is that through all of
time someone or another has worked the room
to their advantage. Case in point is Mata Hari,
a Dutch exotic dancer who was quite popular
in Paris. Intimately familiar with many gents
she saw, heard, or did things that she shouldn't
have. Armed with such knowledge Mata sold
said assets to gain power and security. Once
the first World War was initiated she played
both sides by providing Germany with Allied
secrets. Caught in the act she went out with
a bang before a French firing squad. 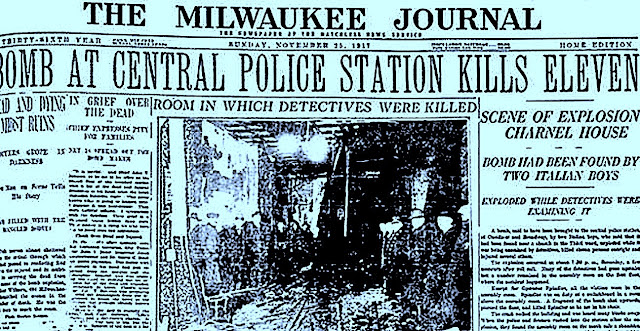 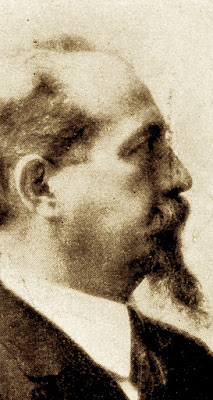 November 24th, 1917
On Saturday the twenty fourth a social worker
discovered a bomb hidden in a package near a
church in Milwaukee, Wisconsin. The church
janitor dragged it down to Police Headquarters.
Soon thereafter it detonated killing nine police
officers and one civilian. Ultimately it was tied
to avid followers of Luigi Galleani an Italian
anarchist who was deported in 1919. Thus long
before ISIS, the "Galleanists" staged hundreds
of terrorist attacks and assassination attempts
within the United States from 1914 until 1932.
Killing hundreds and injuring thousands. And
so we are reminded that crazy is as crazy does. 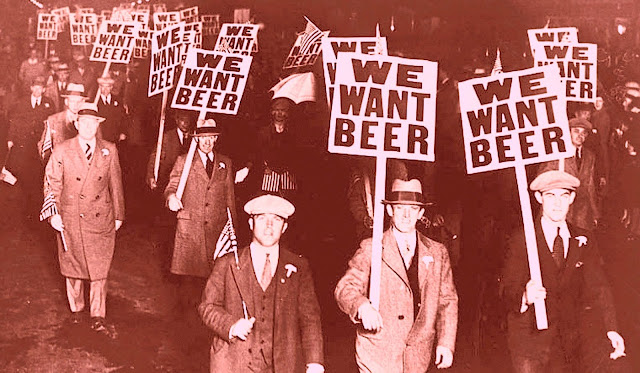 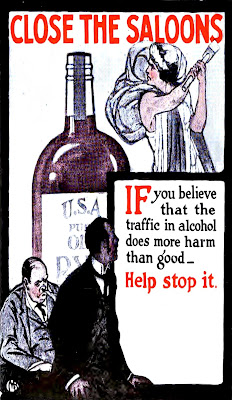 December 18th, 1917
The eighteenth amendment prohibiting the
creation, sale, and consumption of alcohol
was approved by the U.S. Congress and
sent to states for ratification. Ultimately
this failed attempt at limiting our intake
took effect on January 16th, 1920. While
the law initially lowered America's thirst
for alcohol, organized crime leveraged the
opportunity and built a massive network
to illegally manufacture and sell booze
throughout the United States. Thirteen
years later, more Americans drank than
ever before. And so the law was repealed. 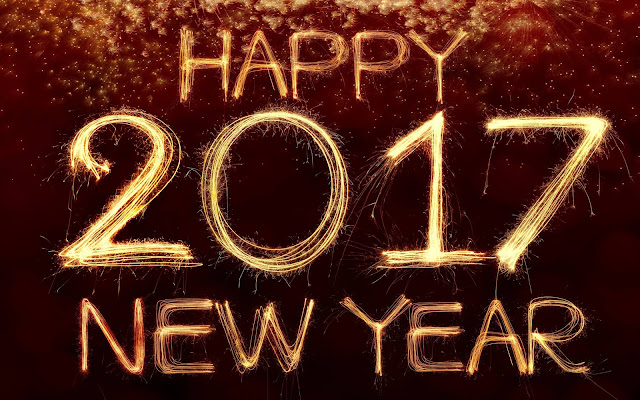