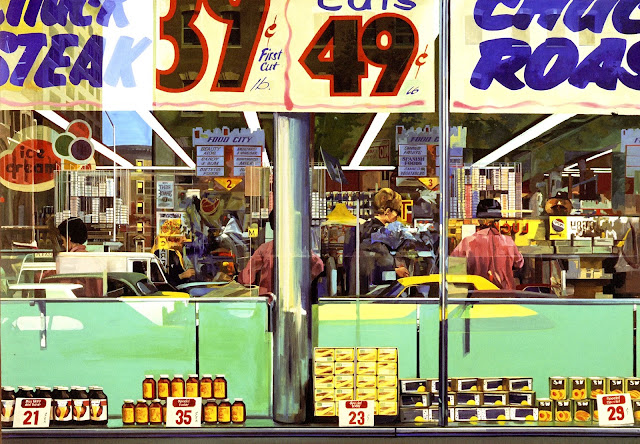 We are what we eat...
One of the greatest differences between living
in the big city versus suburbs or outer limits is
how one procures food. Here in Manhattan one
tends to shop on a daily basis. Said capricious
approach to stocking one's larder is driven by
two things. One is that given there are at least
a hundred dining establishments within walking
distance, it's hard to to plan ahead. Second the
chances are should one opt to shop it must be
done via foot. Meaning that loading up even a
petite panier must not exceed an amount easily
carried home. Unless you decide to let them
deliver. Thus for most urbanites - less is more. 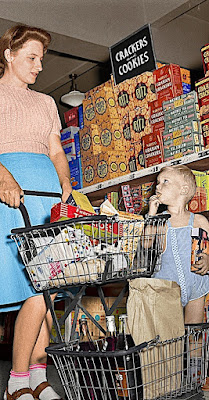 Frequent shopper
Way out west in Lewistown it's the opposite
of circumstances. Given one invariably has
a forty mile drive to the grocer, you need to
stock up on more than essentials. Therefore
almost every central Montanan loads up
their cart with a week or more of supplies.
It's no wonder all the ladies at Albertsons
thought I was nuts given I was there almost
everyday. For whatever reason I couldn't get
out of my urban grocery groove. Planning
ahead not only requires discipline, it forces
one to commit to where... what... and when.
Whereas I prefer to go with the flow. 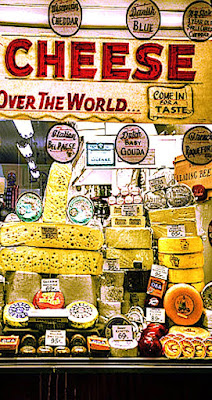 From foot to mouth
Frequency aside, there are so many other
differences between here and there. First
of all theres the simple variation of square
footage. Most grocers in Manhattan are at
a max of two to three thousand square feet.
Whereas the average American food store
is almost fifty thousand. Within such wee
confines a city dweller's options should be
limited. However in Manhattan our grocer
has all the things I've lacked in Montana.
First and foremost there is cheese. Rather
than having one blue or brie to select from,
I've once more got dozens of options! 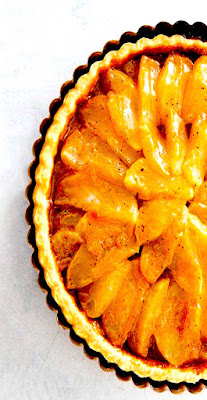 How sweet it is...
Did I mention the pate'?! For three years I've
been craving it. However the only way to get
the stuff in Lewistown was to make it myself.
Now once more I have my choice of at least
a dozen varieties to spread at will. Including
fois gras! Then of course theres the bakery.
Back home the options are rather limited and
frankly a bit pedestrian. Whereas here in the
big apple the fruit tarts, chocolate tortes, and
other sweets waiting to be taken home can
easily make one swoon. All within my teeny,
tiny hole in the wall gourmet garret. Proving
that LESS can most definitely be MORE. Meat and greet
Said adage also applies to meat and poultry.
In Lewistown big is obviously better. Hence
if one wants to roast some chicken thighs
they must buy a pack hundreds. Whereas
here in the city that never sleeps every pre-
packaged protein comes in more manageable
portions. If I want to cook rabbit in Montana
my only option is to hunt for it. Whereas at
my local grocer there are several bunnies
waiting to be thrown into one's pot. When
it comes to lamb or veal one can have any cut
they want - from shank to shoulder to loin to
chop. I'm in a carnivore's paradise. 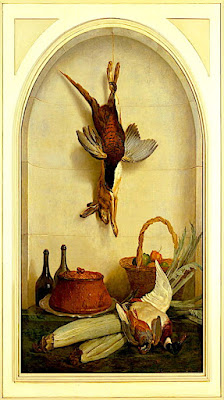 Fowl whether
Ready and waiting are tripe, sweet breads,
plus all sorts of livers, hearts, and kidneys.
And finally if one needed further proof that
they where in civilization - almost every
grocer pre-packages three dainty mounds
of ground beef, pork, and veal so that one
can easily create a proper meatloaf. And
did I mention the ducks and geese? All
one has to do is grab one rather than call
a Hutterite. Don't get me wrong, I want
for little when living in Lewistown. Yet
my return to this city of milk and honey
reminds me of what I've been missing!

Pros and cons
I'm not even going to talk about produce.
Radicchio, Belgian endive, and multiple
varieties of mushrooms are readily on
hand. However immersing myself in this
veritable culinary cornucopia has not been
the most surprising of revelations. Rather
if one wants a wake up call that confirms
they're in a very different place all one has
to do is shop the specials. Way out west
Albertson's is always running a sale. But
most of said deals are not on my list. That
is unless I want to buy ten boxes of Kraft
Macaroni and Cheese for ten dollars. 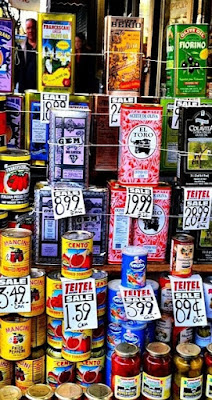 Gourmet to go
Here in New Amsterdam shoppers desire
different deals. Hence rather than plebeian
pre-packaged fare - urbanites stock up on
gourmet goodies. This weeks sale items
included Bon Maman preserves 2 for $4.
Balsamic Vinegar - $2 for 5. A big bottle
of cold pressed Italian Olive Oil for $7.99.
And a deal on Dijon - $2 for $6. Speaking
of prices - I can buy the same Irish butter
for the same price here as in Lewistown.
Or I pick from other imported varieties
including six from France. Further proof
it's all about location, location, location.

The best laid plans
By the end of a recent visit to my urban grocer
I spent approximately one third more than I do
back home. However I came home with six bags
full of fabulous food. Again I want to reinforce
that I in no way have felt deprived while living
way out west. Simply reaching in the fridge for
an egg that was laid the day before is reason to
live thousands of miles away from Manhattan.
Or dining on a T-Bone from that grass fed cow
your friend raised. Folks here in New York City
would kill for easy access to such fabulous fresh
fare. However it's only a short cab ride down to
the Union Square farmer's market. Bon appetit!
Posted by montanaroue at 4:00 AM