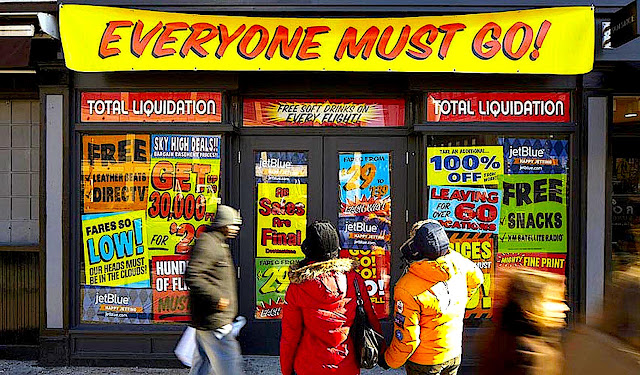 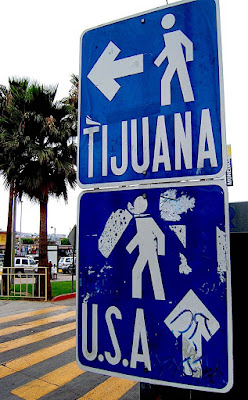 Shop till you drop
Traveling around this country I've no
doubt we're collectively challenged by
the battle between fantasy and reality.
The resulting schism has been created
by change and a resulting backlash of
resentment. It's the manifestation of
the growing diversity of this country's
population and an ever increasing gap
between the classes. Over the past few
days I've been viewing said clash head
on. Watching real people living reality
in real places. In other words, I've been
off-price shopping with America. 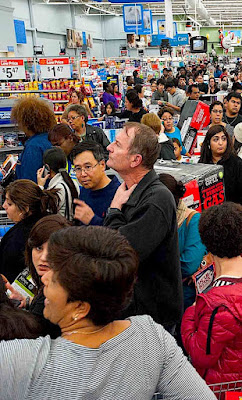 Mass marketing
Since the dawn of time almost everybody
has loved a bargain. Thus even in a world
where retail is slowly fading away, deep
"off price" discounters are thriving. Who's
buying all of these mass retailer castoff's?!
A mix of Americans who are willing to do
whatever is necessary to live the American
dream. Rather than bemoaning the loss of
times past, they're moving up in a blaze of
bedazzled hot pink leopard printed fleece.
In my opinion said shoppers are the living
manifestation of our national melting pot.
THEY are making America great again! 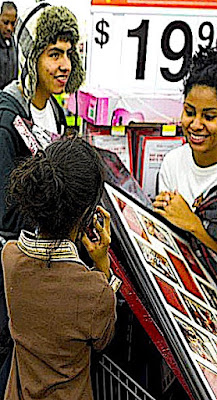 Satisfaction guaranteed
Hence the great divide. On one side we have
immigrants who are voraciously devouring
all symbols of their successful entry into the
American mix. Whether legal or not, those
I've been shopping with represent every race,
color, and creed. All of whom make up our
magical concoction called democracy. And
rather than being disenfranchised, they are
happily building their futures in a new land
of their choice. Thus this side of the spectrum
is in essence a sub group of Americans who
are filled with optimism. You can see it on
their faces and... in their shopping carts. 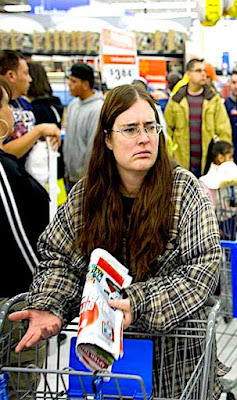 Limited quantities
On the other hand, I also saw the minority -
disenfranchised white folks. And frankly
coming face-to-face with such a walking
manifestation of defeat is disheartening at
best. Whereas their fellow shoppers smile,
these forgotten folks wander the aisles with
scowls upon their faces. Visibly angry over
something, they resentfully flip the racks in
search of a deal. The dramatic dichotomy
between  "us" and "them" is quite shocking.
And suddenly, at least for me, the recent
election results finally made sense. They
want what they assume is rightfully theirs. 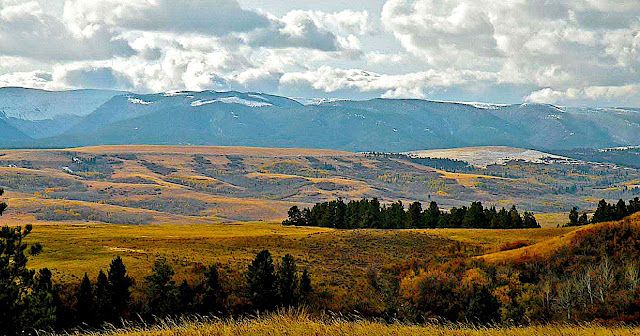 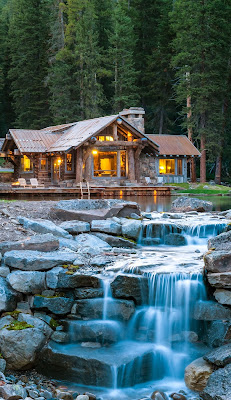 Outside influences
It's not that different here in rural Montana.
The exception being that we've few people
of color. Except for indigenous Americans
who have been systematically isolated for
generations. Sans an influx of immigrants
local farmers and ranchers are still in need
of someone to blame for a dwindling world
as they know it. Thus their enemy is quite
a different group of newcomers. Hot shot
billionaires who are buying up and fencing
off as much land as possible. Or Wall Street
tycoons who are building massive manses
out in the middle of nowhere. 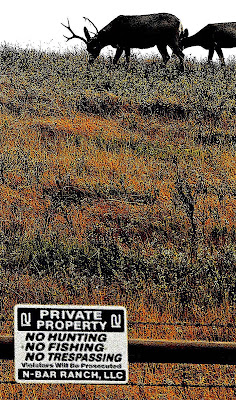 Don't fence me in
The change agent fueling said angst is a
sizable portion of the populace who feel
they're being edged out by "outsiders."
Whether thats driven by falling crop or
cattle prices or the results of their own
decisions can be argued. However what
can't be challenged that most natives
don't feel they're in control anymore.
And that not only pisses them off, they
are terrified of the consequences. Thus
they're angry and ready for a fight. And
simply acknowledging the fact of such
unrequited anger can break your heart. 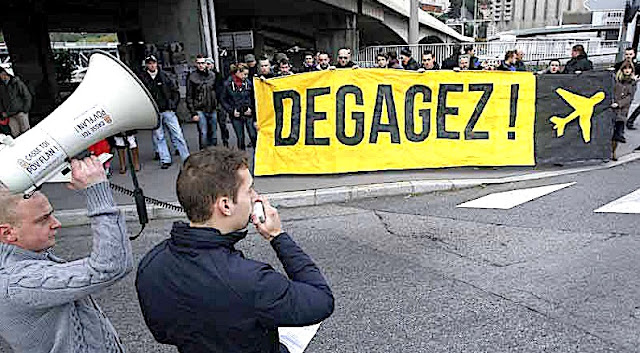 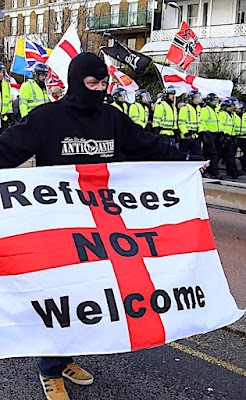 No return policy
America is not alone. Throughout France,
the United Kingdom, Germany, and even
Japan the status quo populace is lashing
out at anybody new. Thus in essence we're
all in a state of global transition. Leaving
those who have the most to lose in a state
of anarchy. Blindly ready to defend all that
they feel is theirs alone - against all odds.
From Brexit to Birkinis they're battling an
ever increasing infusion of newcomers.
Ready and willing to point a finger at any
outsider. And while shocking, the fact is
that we really shouldn't be that surprised. 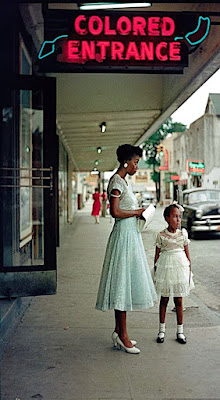 Limited selection
Can we survive this transitional phase of our
collective evolution?!. A natural inclination
of any creature who feels threatened is to put
up barriers from which they can lash out at
intruders. Hence the idea of building walls,
limiting immigration, or violating signed
trade agreements fuels the hopes of those
who feel they're on the losing side. Along
with such provincialism comes it's ally -
prejudice. Thus labeling one's enemies is
an easy way for everybody to hate anyone
who isn't one of them. Think Hitler, Selma,
Apartheid, and "radical islamists." 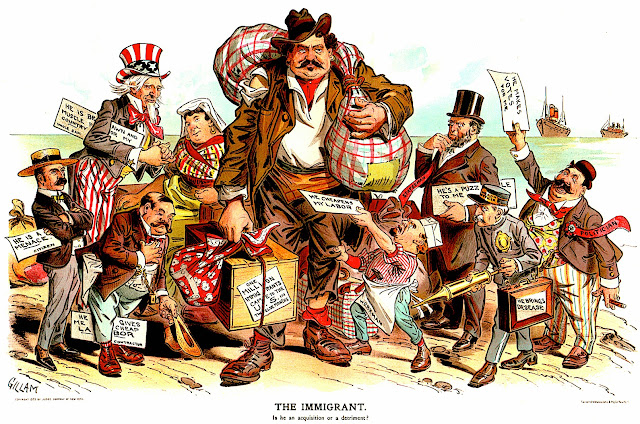 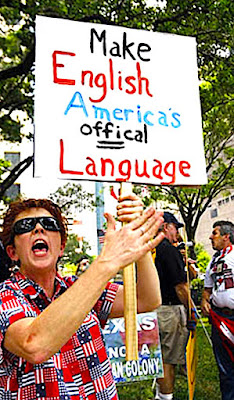 While they last
Friends, this isn't a new phenomena. Since
the dawn of mankind "us" and "them" have
battled for control. My quandary is whether
any of this relates to our democracy? Sadly
it seems that we moving to a time where
"freedom and justice for all" will be only
limited to the cultural equivalent of soon to
be extinct dinosaurs. Diversity has always
been our differentiating factor. Without a
melange of people, backgrounds, cultures,
and ideals, the United States of America
will no longer be unique. We must never
forget that TOGETHER we are stronger.
Posted by montanaroue at 4:00 AM