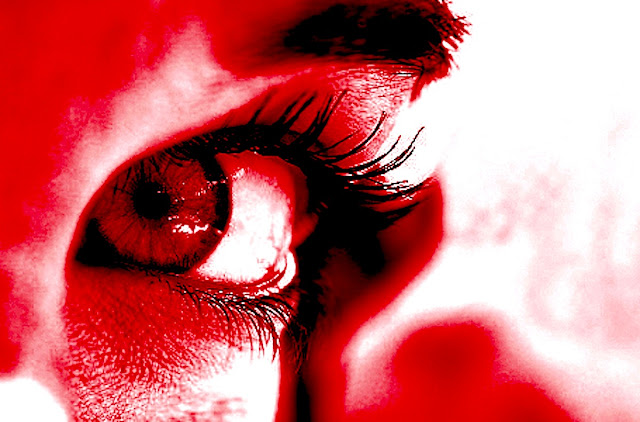 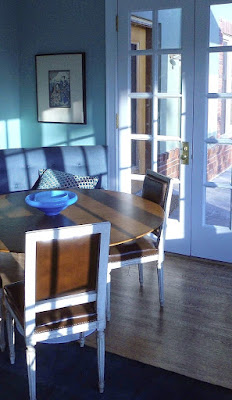 Chill pill
Lately I've been rather nonplussed. At
time it seems that little is new or unique.
Therefore as soon as one completes a
project that they consider to be outré -
it can almost immediately be deemed as
passé. I've always loved turquoise yet
my aqua aura didn't manifest itself until
we decorated this house. As we planned,
unbeknownst to us, said hue was on the
upswing. Hence everywhere we look
we see blue/green tones. Suddenly we
have become part of the pack which is
why all I've been seeing lately is RED. 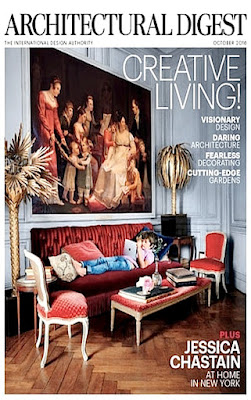 What the hell?
The latest Architectural Digest is a bit
of red journalism. Upon it's cover sits
a red melange that I find much to my
liking. I've no desire to channel Miss
Scarlett. Nor do I want to live in red
room a la Diana Vreeland (as shown
above.) Hence while I have no plans
to hit the red light district, I will admit
that I fine myself virtually vexed by
various vermillion varieties. Could it
be that much like the autumnal maples
I'm turning red in my old age? Is now
the time to turn over a new leaf?! 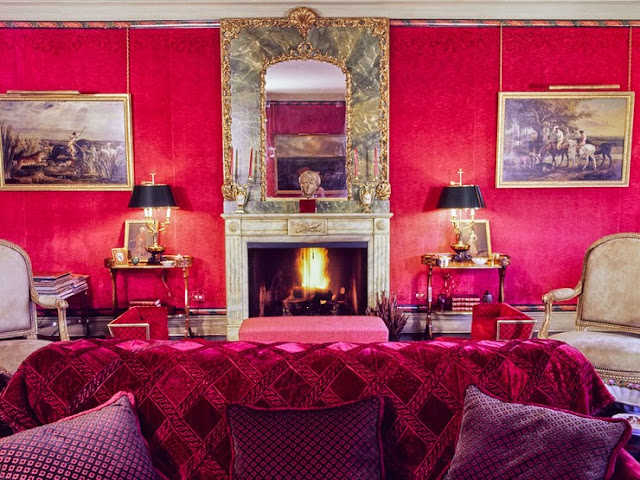 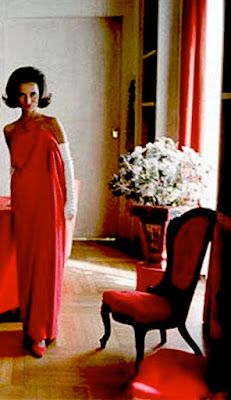 Well red
Vogue recently released images of several
of Lee Radziwill's past homes across the
years. Always a style leader, most of us
assumed that said spaces were subtle in hue.
However said color corrected blasts from
the past reveal crisp, clear, and chic rooms
that resonate in a magical way. Don't get
me wrong. I've no desire to burn in the
perpetual hell of an all red oasis. However
I'm finding the idea of a pop of rouge rather
intriguing. And if nothing else an antedote
to the neutrality of our Restoration Hardware
world. Maybe it's time to turn up the heat?! 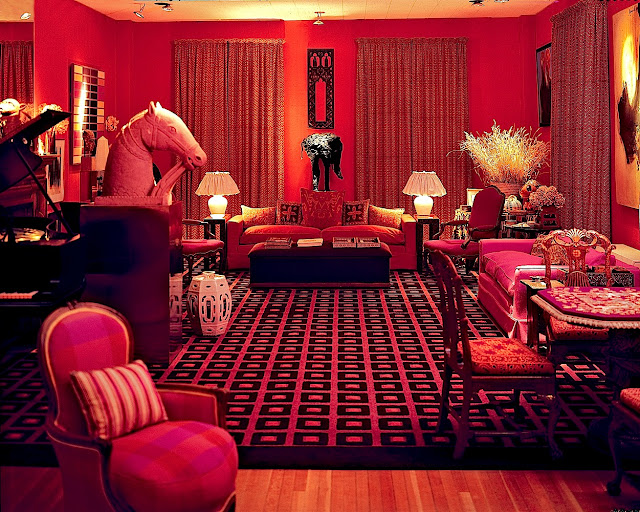 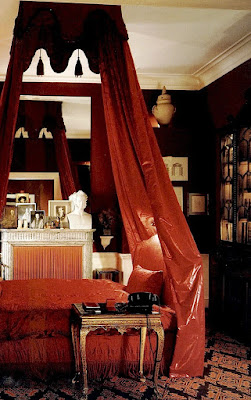 Fire extinguisher
They say the less is more. Hence in my
opinion some of the most successful red
rooms have been somewhat diminutive.
Rather than igniting a massive bonfire,
a carefully constructed conflagration may
better warm the soul. David Hicks often
used variable of rouge during the sixties.
While most may now appear questionably
habitable (above), the bedroom shown at
right still reigns serenely scarlet. Much
like a babe in their mother's womb, it's
owner must have enjoyed sleeping in
such a comforting cinnabar cocoon. 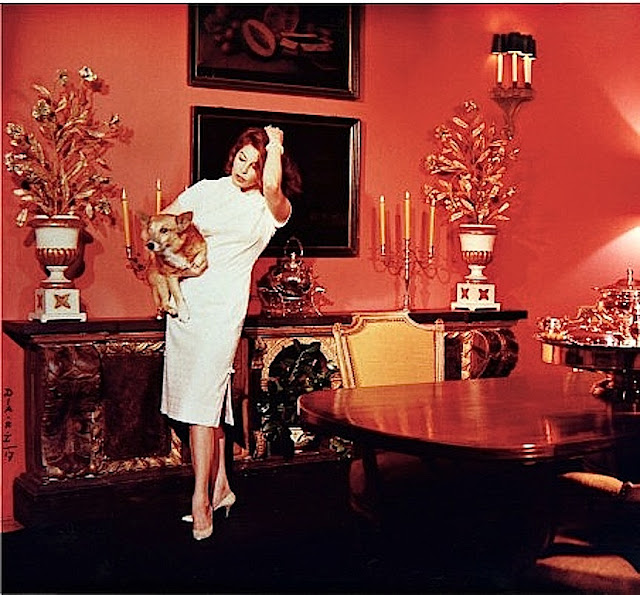 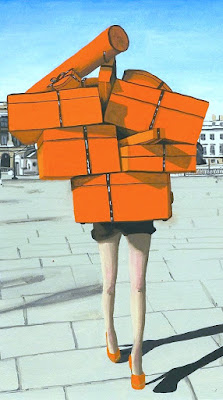 Out of the box thinking
As you may recall, my favorite color is
orange. Persimmon has always seemed
to me the perfect bridge between orange
and red. Recently I've been placing deep
cinnabar toned roses in our rich tobacco
brown living room. They add a touch of
spice that livens up the space. Speaking
of spicy, Ava Gardner (above) loved her
posh persimmon dining room. While this
space was created over fifty years ago by
George Stacey - it still looks astonishingly
chic to this modern eye. Imagine living in
a gigantic Hermes box… heaven on earth! 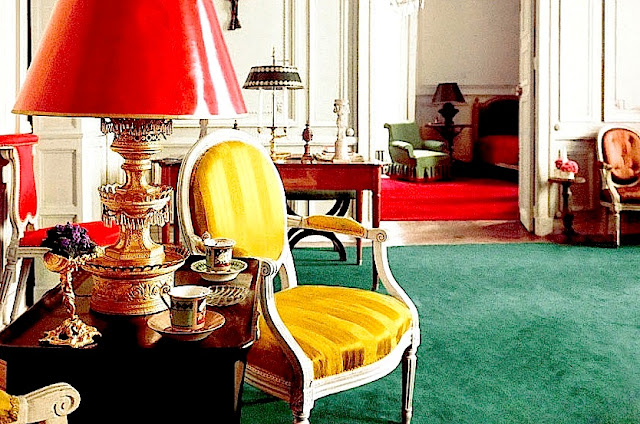 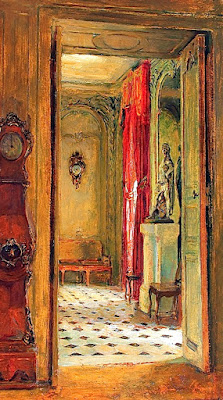 By George!
Speaking of George Stacey - said gentleman
was not only an arbiter of taste. He was the
master of color. Red is if nothing else sets a
rather triumphant tone. However like almost
anything high powered, it's best used with a
bit of restraint. As shown above, Mr. Stacey
knew when, where, and how to add a pop of
power to enliven a room. The art of mixing
lemon yellow, kelly green, and vermillion all
together in one space inspires me anew. Thus
you may be seeing a hot spot or two within
our home sometime soon. After all, it isn't
called the Passion Pit for nothing!
Posted by montanaroue at 4:00 AM