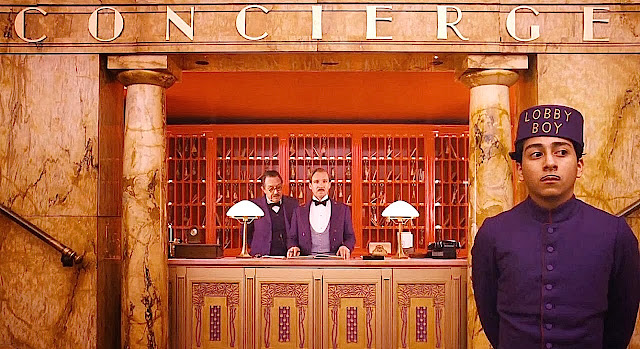 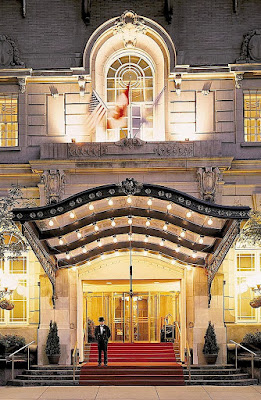 Red carpet treatment
After spending a week in two luxury
hostelries - we really didn't want to
go home. In a place where everybody
else does the work it's easy to be lulled
into a state of bliss. Yet what we most
adored was the anonymity. While after
a few days the doorman might know
your name, he really doesn't care who
you are or what you're doing. As long
as you tip him well - he's happy and
you're free to come and go at will. No
wonder hotels are the preferred locale
for a clandestine tryst. 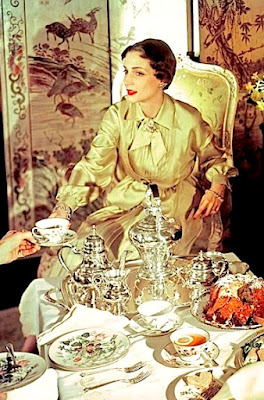 Tray tray chic
There's something decadent about the
fact that someone is at your beck and
call 24/7. Room service alone is reason
enough to never go home. Whether it's
the pomp and circumstance of both the
ordering and arrival process - or simply
that one doesn't have to cook or clean
up - something makes everything taste
better! Not to mention the glow of the
hotel silver and the picante touch of a
delicate rose in a bud vase. Why can't
every meal back home be that special?
Now... where is boy with the bubbly?! 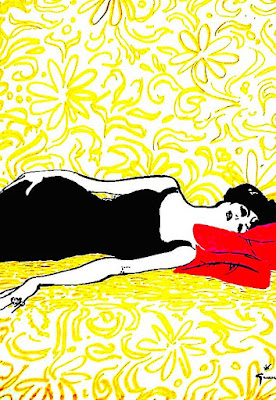 How suite it is
An extended hotel stay is like a trip
to paradise! Who can resist the free
toiletries, fresh linens daily, nightly
turn down service, chocolates on
your pillow, and polished shoes at
your door each morning?! Besides
eating and sleeping one need not do
anything else but relax. And while
we didn't stay in a tropical locale,
napping atop a freshly made bed
was as decadent as any poolside
cabana. In such an altered state of
bliss one can't help but relax... 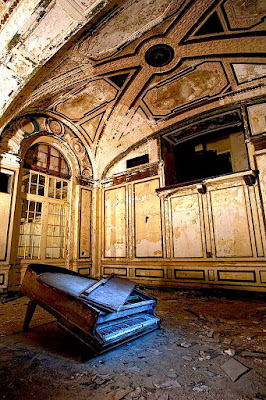 Leave of absence
Years ago in cities across America
there were many residential hotels.
Said hostelries were home to folks
who simply didn't want to bother
with running their own households.
Then the crash of 1929 brought an
end to such decadence. And soon
said nirvanas were white elephants.
Too large and expensive to maintain
a positive balance sheet as hotels or
apartments, they lay abandoned till
post World War Two. Yet happily
many survived to now thrive again. 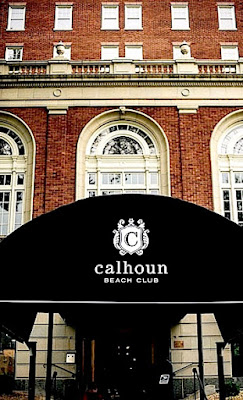 Extended stay
Our home in Minneapolis was one of
said survivors. Construction started
in 1928 only to be abandoned. For
over a decade it sat empty waiting
for salvation. First as a hotel, late
as apartments, and finally a nursing
home. In 2001 it was restored back
to it's former glory as luxury homes.
Living there was just like residing in
a hotel. Our concierge was ready to
help anytime. After a call, the club
dining room delivered to your door.
And the pool was the best in town. 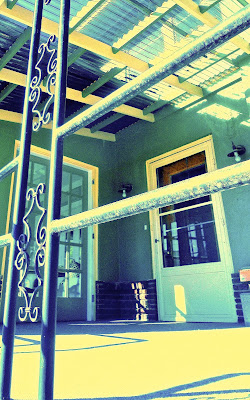 Maximum occupancy
We must love white elephants given we
now live in one! The Passion Pit went
through a similar journey. Built in 1917
as a single family home, it was converted
into the "Ramona" apartments in 1937.
By the mid eighties it was a convalescent
home. And twenty years later was empty.
Then someone stabilized it and finally we
took on it's restoration. Whatever were
we thinking?! After years of no domestic
responsibility we're now tasked with the
pleasure of running a household that's if
nothing else... A TON OF WORK! 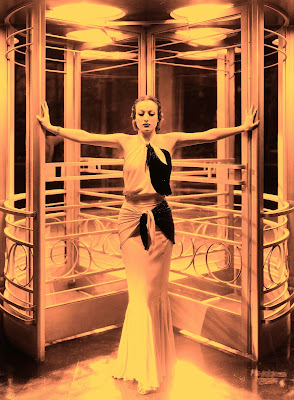 With reservations
No wonder we reluctantly returned
home! If nothing else we've earned
the right to periodically escape. And
while it was nice while it lasted, it's
time to face reality. It's been said
that absence makes the heart grow
fonder. Therefore it makes sense
that we missed our home. Now that
we're back in it's confines it feels
just as good as inhabiting a suite at
the Ritz. Our only problem is how
we'll afford to hire a concierge...
and maid... and doorman... and...
Posted by montanaroue at 4:00 AM