Let's have a picnic 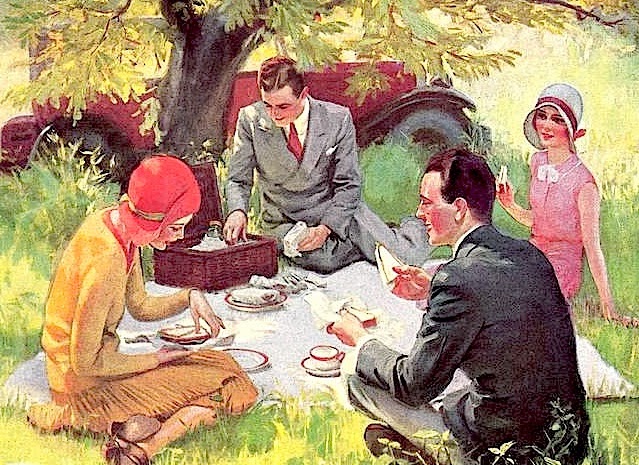 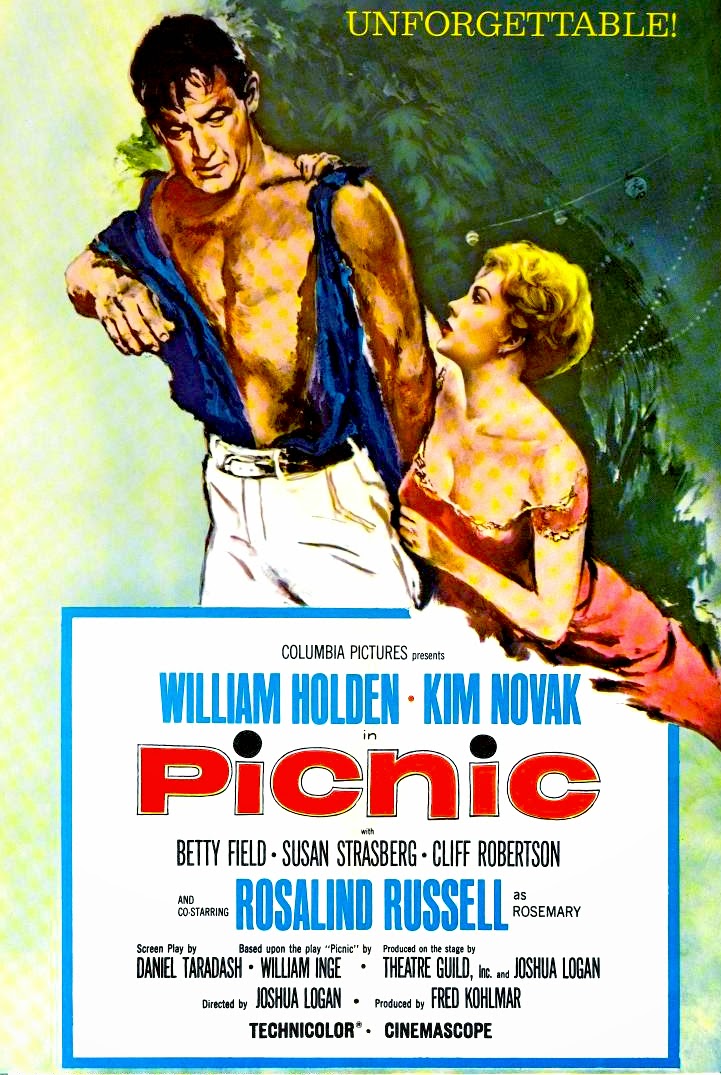 Pack it up
Throughout "T's" prolonged summer
sojourn in Lewistown she has often
proposed dining al fresco. Yet to date
Frank and I have not embraced the
idea of actually eating outside with
the mosquitos. Part of our problem
is that our new backyard has no place
as of now for exterior consumption.
However if I'm honest, I prefer to
avoid anything even slightly related
to a picnic. Leave that to Kim Novak
and Bill Holden. This boy is an innie
not an outie! Shut the door! 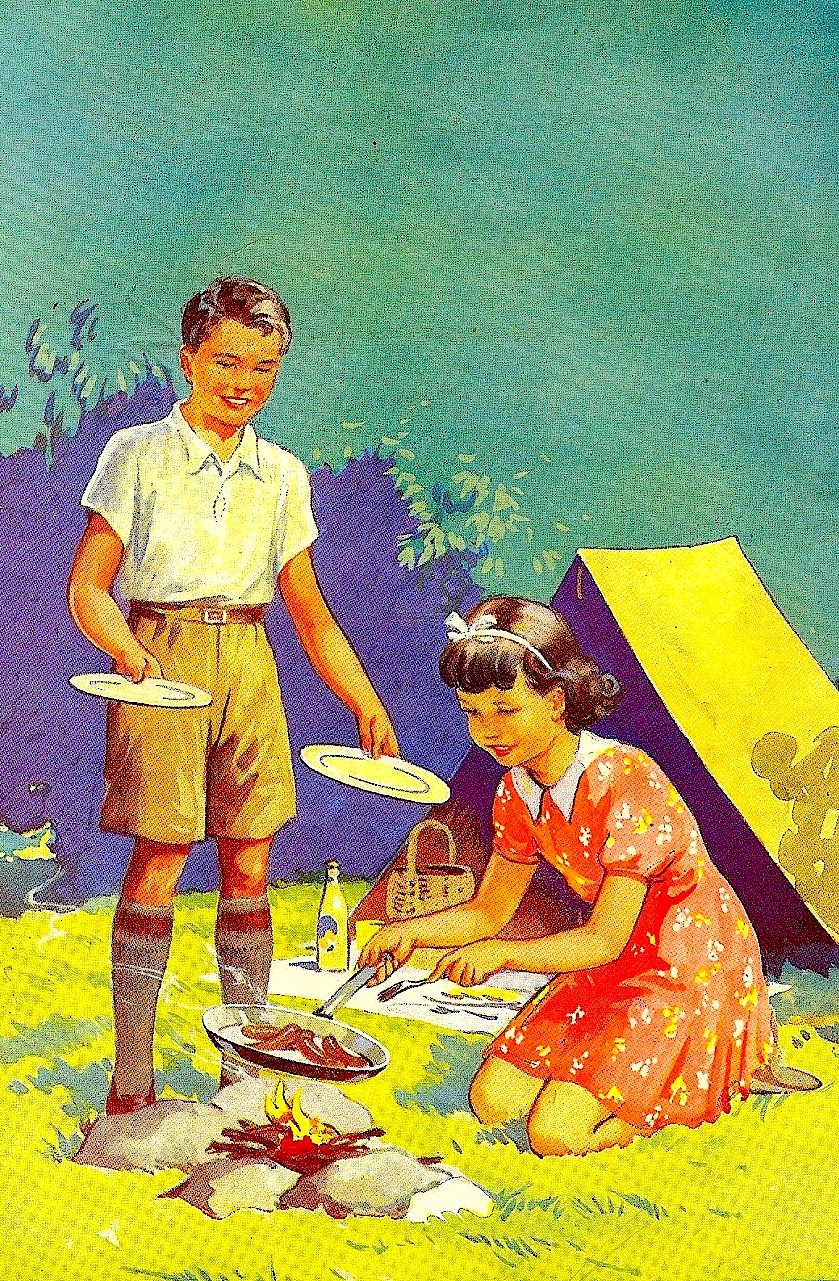 Totally camp
Ethel loved the great outdoors. As
a city dweller, nothing seemed more
adventurous than dining outside. She
loved to camp and hence for several
weeks each year we left the asphalt
jungle behind to live out in the woods.
There amongst the pines Mother let
her hair down... literally! Suddenly
her coif was a pony tail rather than
a french twist. While I enjoyed this
kindler, gentler woman, I hated all
of the bugs and critters. So for two
weeks I just sat on a log and itched! 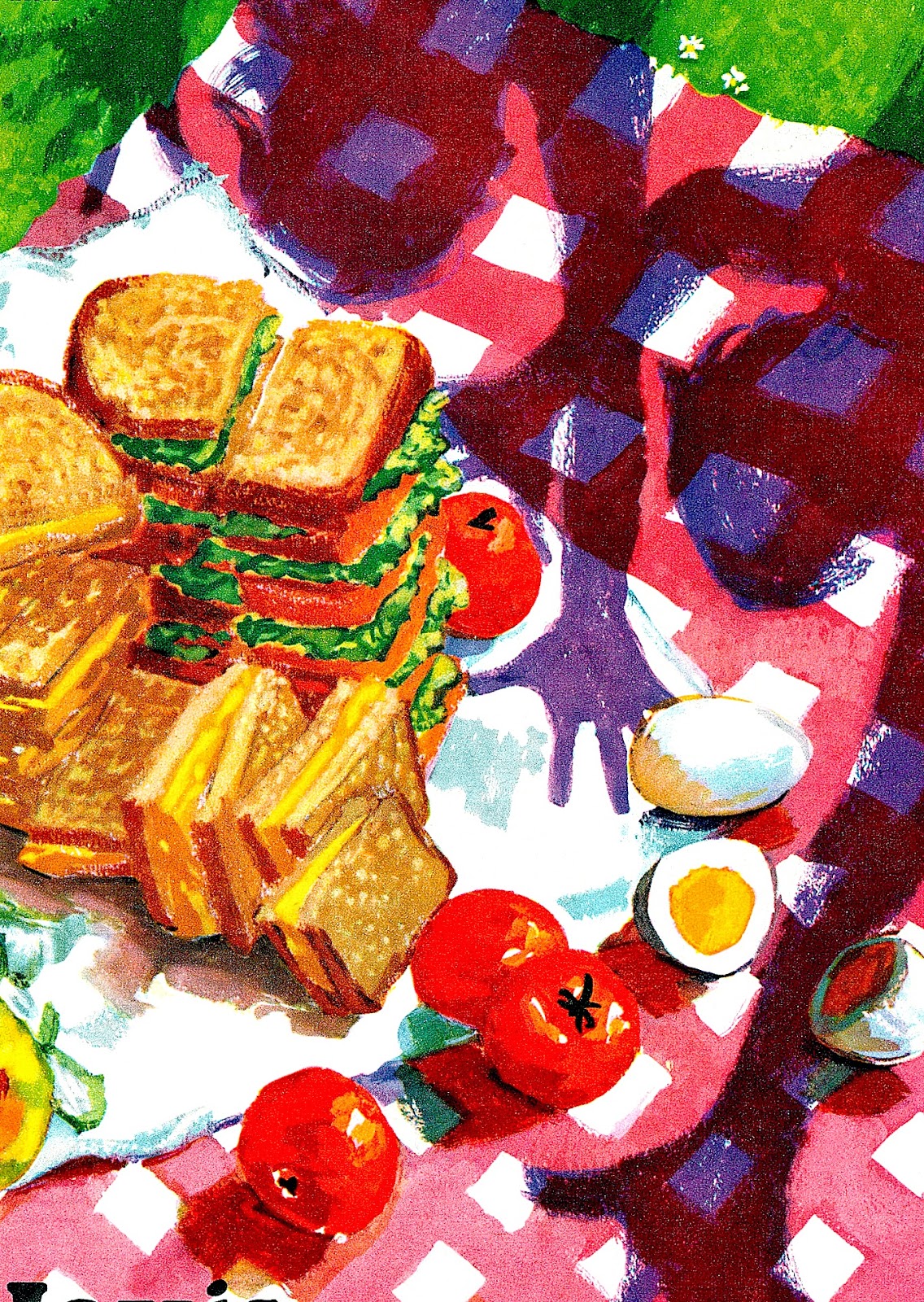 More than antsy
At the cabin one might assume that
we dine in the open air. Actually it's
rare that we do so. Depending on the
season, the flies can be intolerable.
Of greater concern are larger species
that roam the woods. A few years
ago Frank was eating outside when
he saw a mountain lion stroll by. My
macho man shooed it away but one
doubts that even he could handle the
three cats recently snapped by our
movement activated camera. So no
chewing on any pork chops outside! 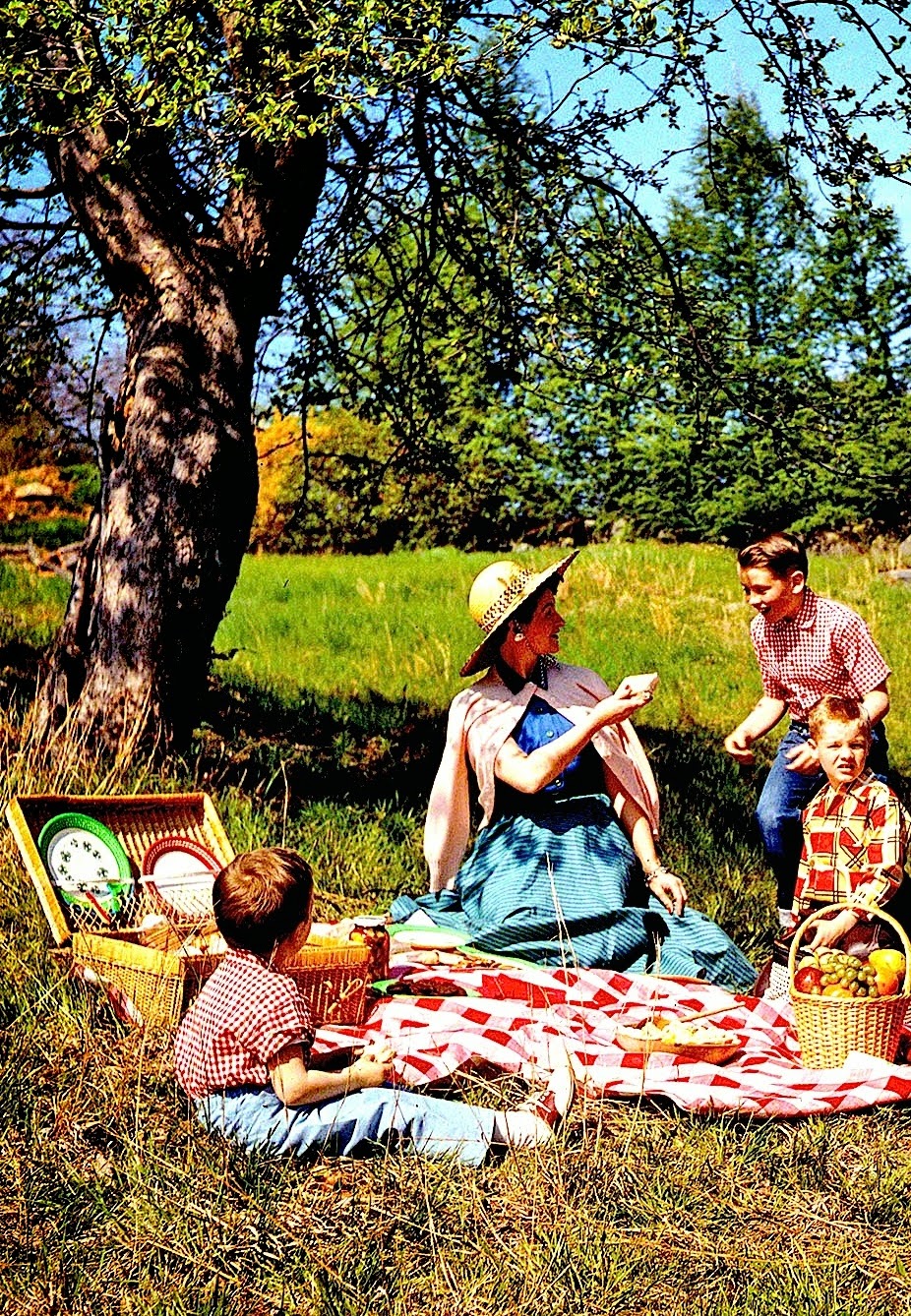 A tisket, a tasket...
It's not like I haven't tried to embrace
exterior eating. One of many lovely
wedding presents my ex and I were
lucky to receive was a posh picnic
basket. Fully outfitted with all of the
necessary accoutrements, one could
not help but be prepared to brave the
elements. Throughout our marriage
we made periodic picnic attempts.
However as our offspring increased,
the process of loading and unloading
consumed more time than the actual
act of potato salad consumption. 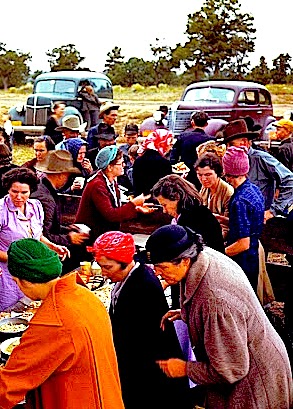 Group effort
In my youth we oft attended group
picnics. The annual Sunday School
fests bored but for my fascination
with how other families set their up
their picnic tables. The variety of
oilcloth and melamine was beyond
enthralling. School field trips always
required eating a sack lunch outside
in some godforsaken "Glen". Rarely
was that setting pastoral. Rather it
usually involved cracked pavement
that was littered with wrinkled wax
paper and crushed milk cartons. 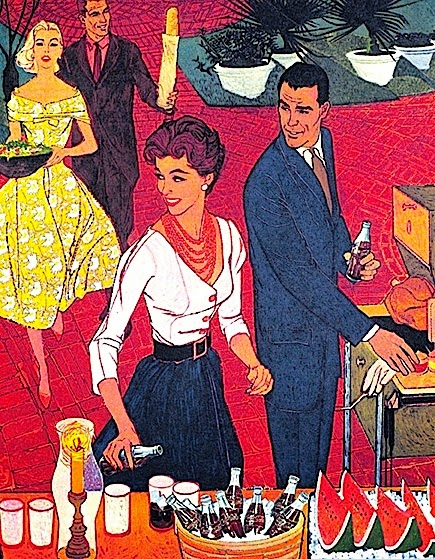 Grill and chill
As the surrogate of a huge Italian
family, I attended many backyard
barbecues. Frankly I'm not sure
what differentiates a picnic from
BBQ except the amount of on-site
cookery. It was at one of those
festa di famiglia Italiano that I ate
my first roasted Italian sausage
with pepper and onions. Suddenly
the bees and mosquitos really did
not matter. Biting into that juicy
fennel laced magic was more than
worth swatting flying vermin. 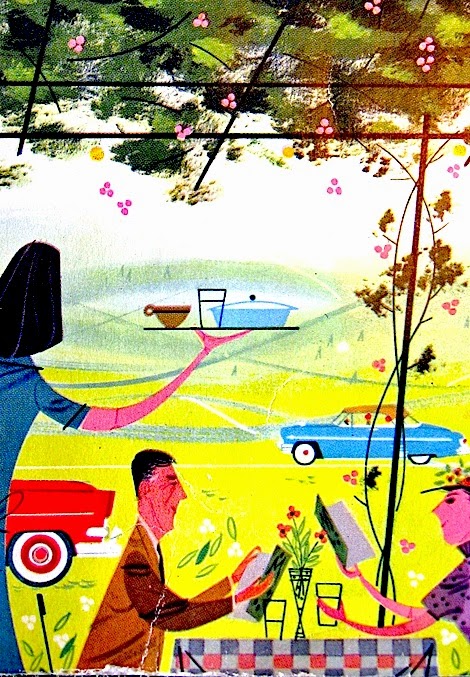 From the terrace
Don't confuse picnicking with dining
on a terrace. When accompanied by
a properly set table I can abide being
outside. At most posh establishments
I avoid pomposity by munching my
meal al fresco when able. One summer
evening I made poor "M" dine outside
on truffled pasta under an umbrella in
a downpour . While damp, anything
was better than joining the waxworks
in the dining room. In the end we had
an memorably moist evening due to
our tears from too much laughter! 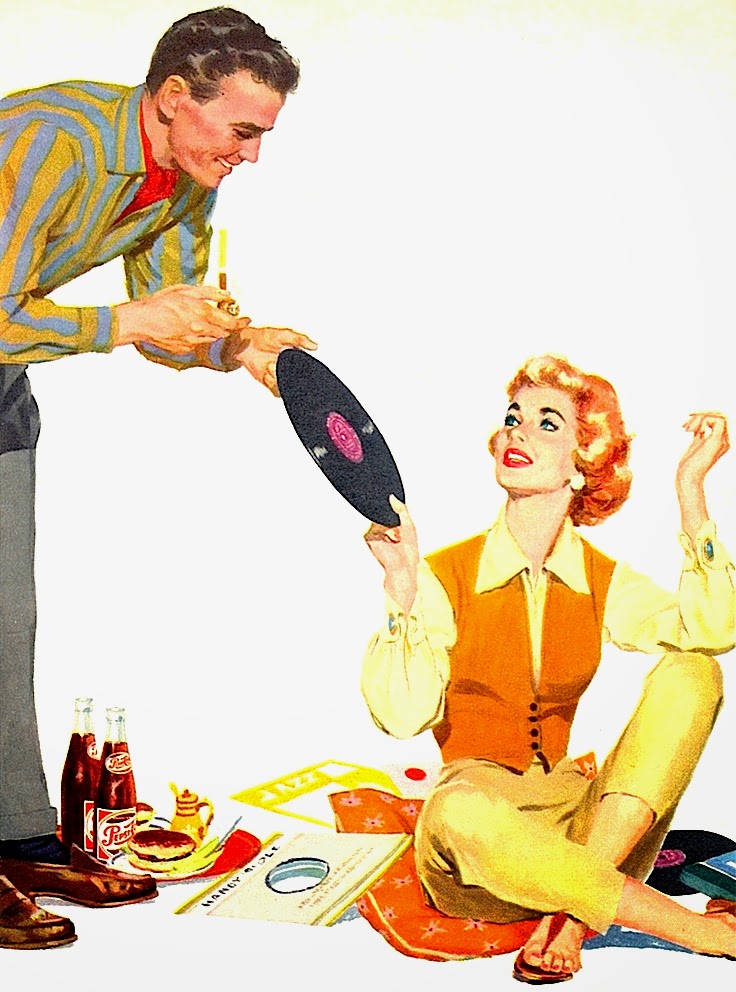 Record weather
Is my picnic phobia a myth? The
truth is I like eating outdoors if
and when the time, location, and
food is right. With proper planning,
equipment, and content it can be
quite pleasant. Maybe it's time to
listen to "T" and give picnics a
chance. Then again, maybe it's
time to just pretend I'm outdoors
and dine in my new dining room
surrounded by "T's" mural. We
can enjoying a virtual outdoor
picnic no matter the weather!
Posted by montanaroue at 4:00 AM