Where did it come from? 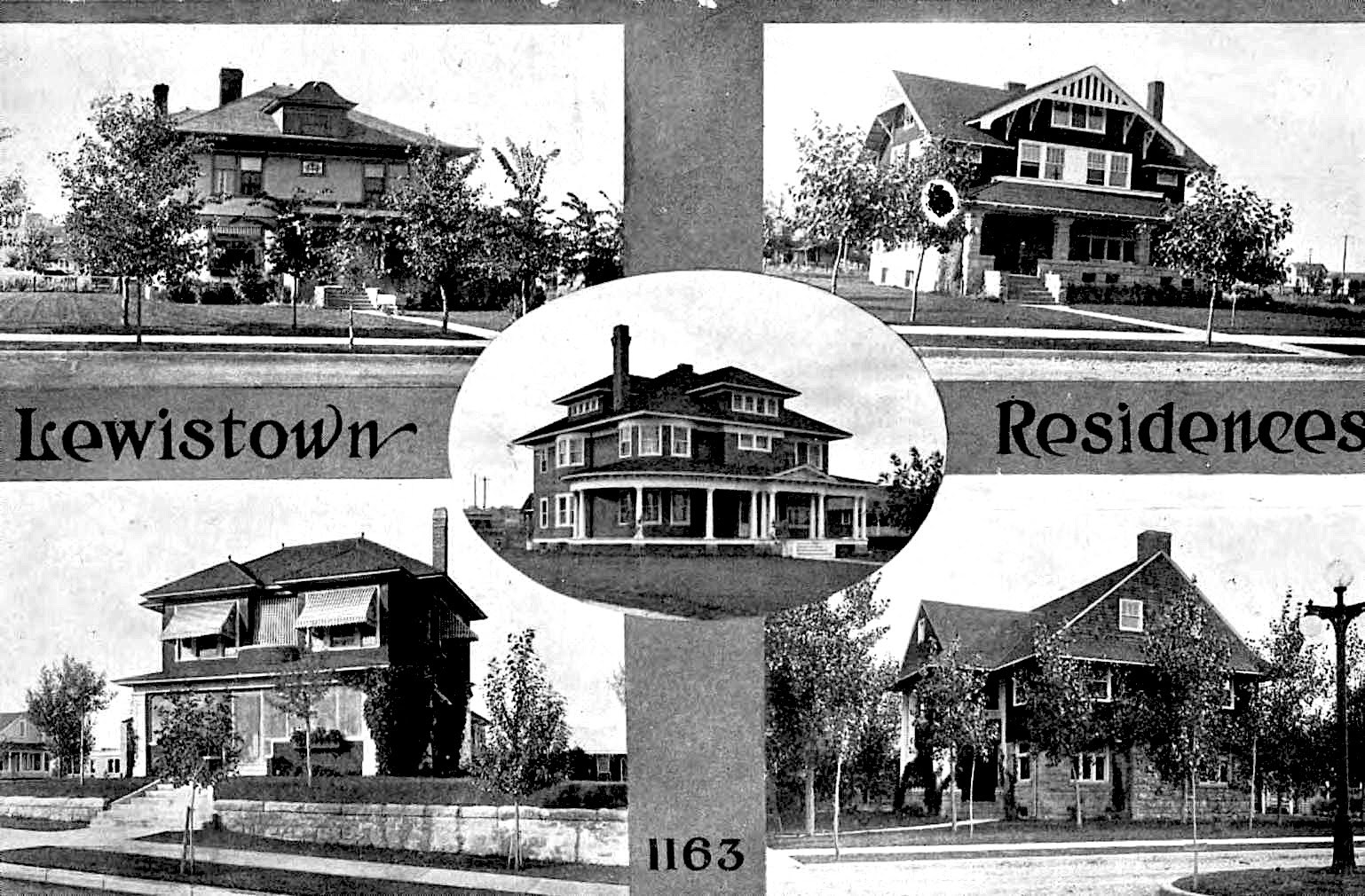 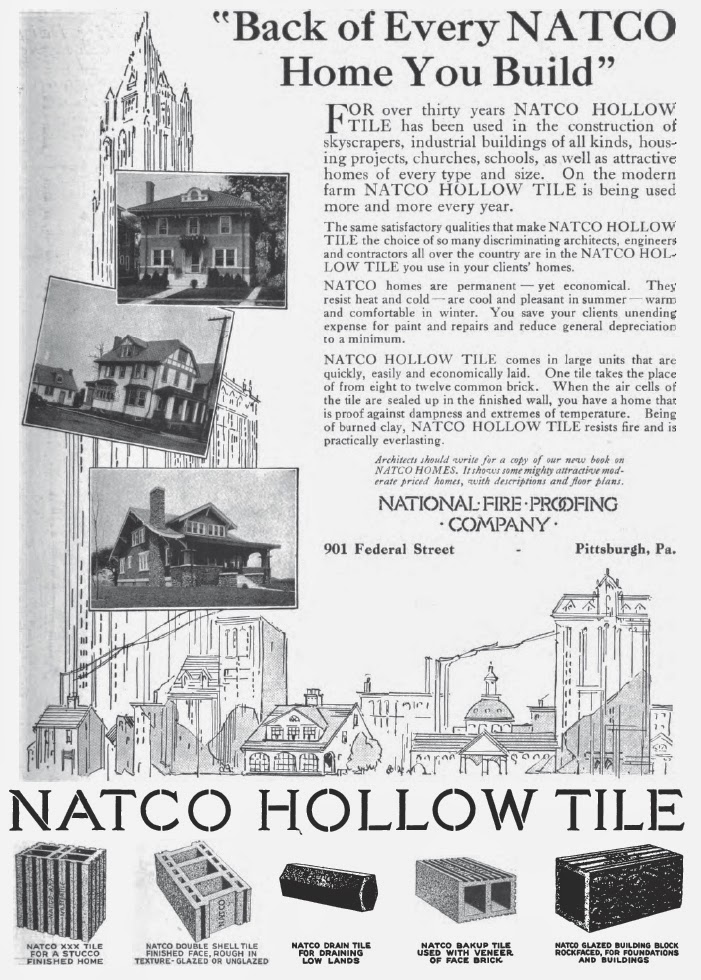 A moment in time
The boom years in Lewistown were
1905 through 1915. Our community
is a perfectly preserved architectural
time capsule of that period. Our new
home is rather an alien being within
that context. Built in 1917 it's blend
of craftsman, mission, arts and crafts,
and colonial revival combines in an
architectural melange. Constructed
of steel and terra-cotta tile clad with
stucco, it was considered fire proof.
Whether one likes the aesthetic or
not, at that time it was quite modern. 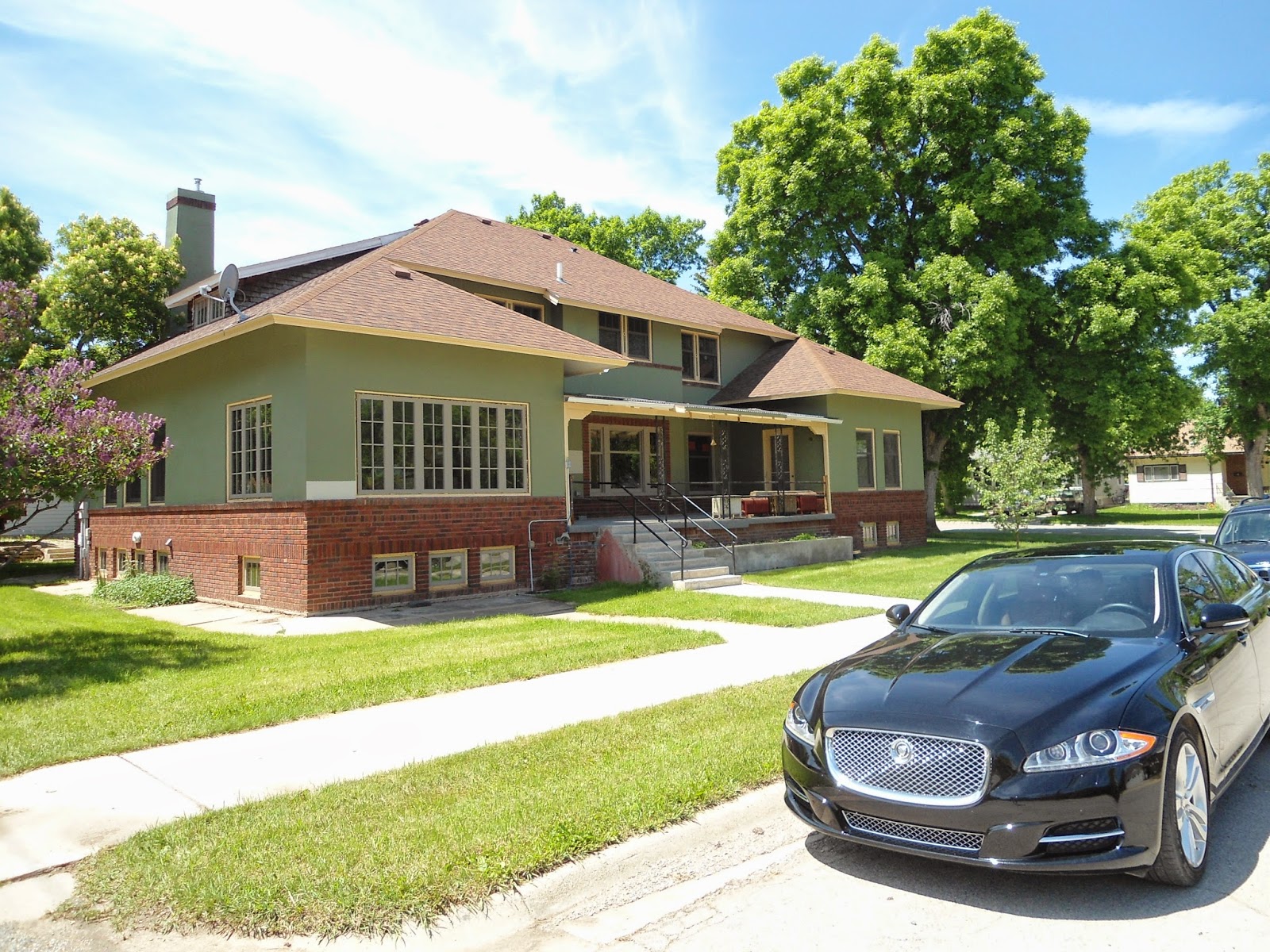 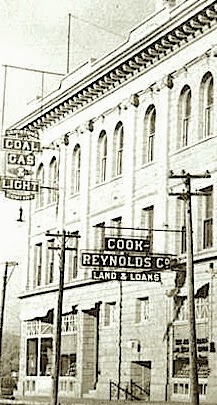 A stand out
How did such a modern home end up in
the middle of no where? George W. Cook
was the original owner. Born in rural New
York and educated in Vermont, George
went west as a young man. After being a
wealthy sheep rancher, he came into town
and became successful as the government
and railroad land agent. He was also the
mayor of Lewistown and a key leader in
many civic initiatives. Given he was in the
real estate business, building a state of the
art home was the perfect advertisement.
Especially as business was slowing down. 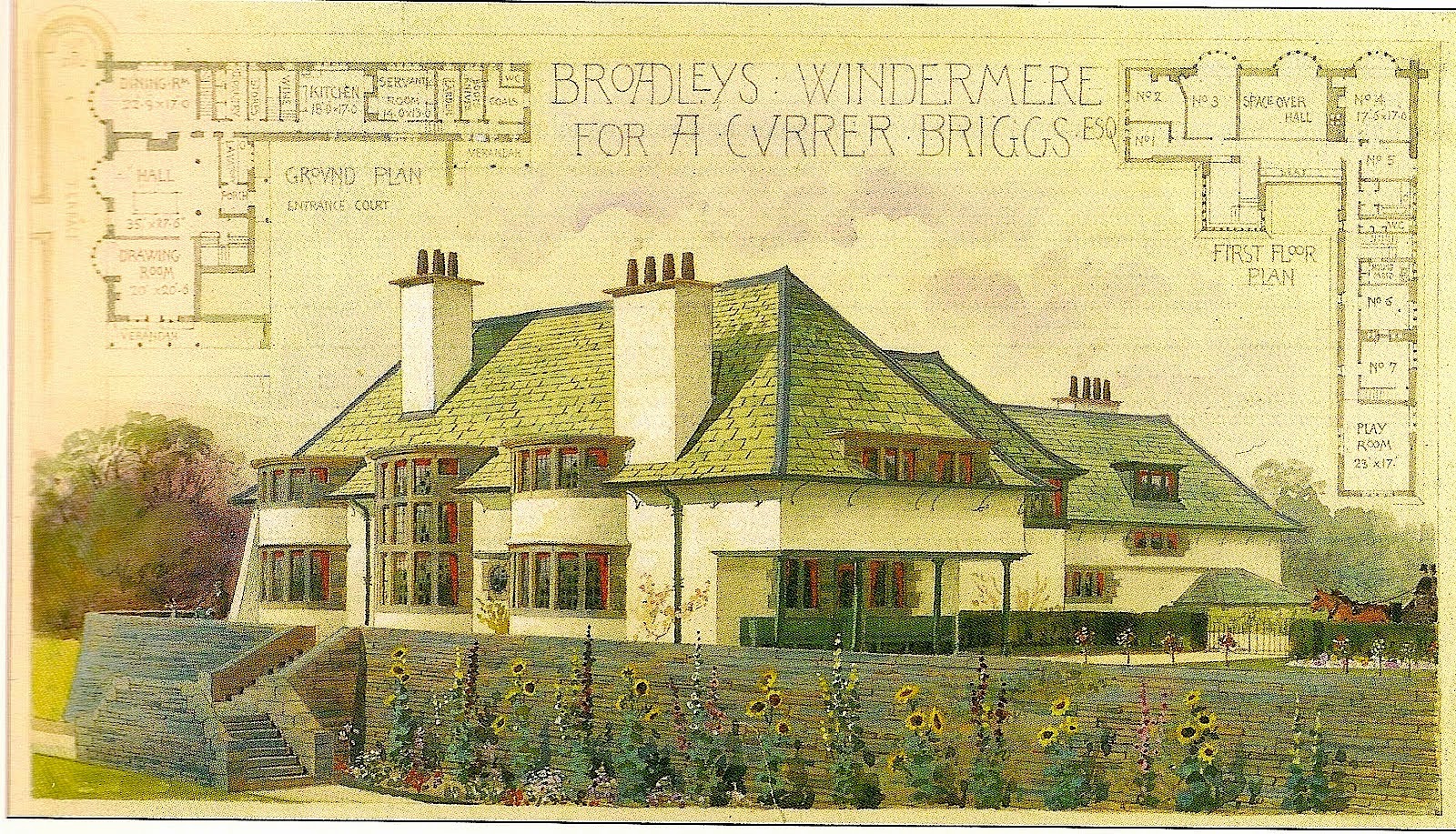 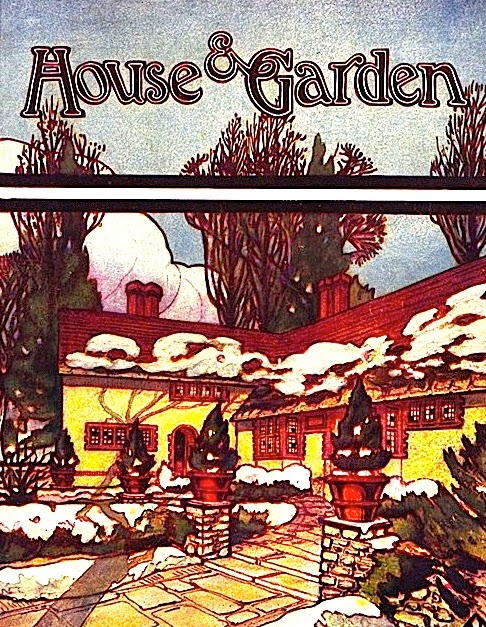 Who, how, where?
So, where did the inspiration for
our house come from? I scoured
the web in search of like designs.
Obviously the Arts & Crafts era
was influenced by the work of
Charles Voysey and Baillie Scott
in turn of the century England.
Add Frank Lloyd Wright and it
all starts to make sense. I poured
over every page of every issue of
House and Garden magazine from
1902-1920 clipping my guts out!
While similar, I found no match. 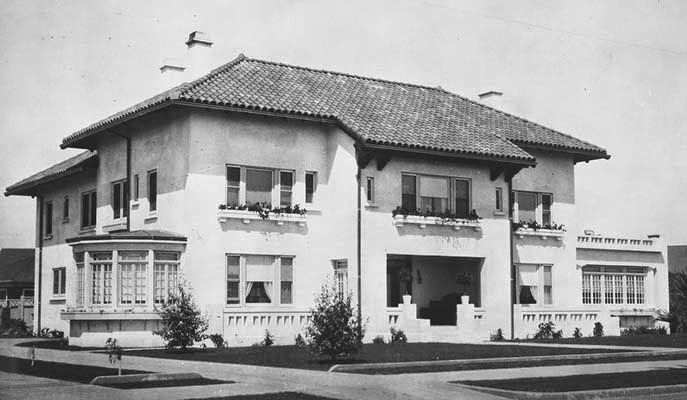 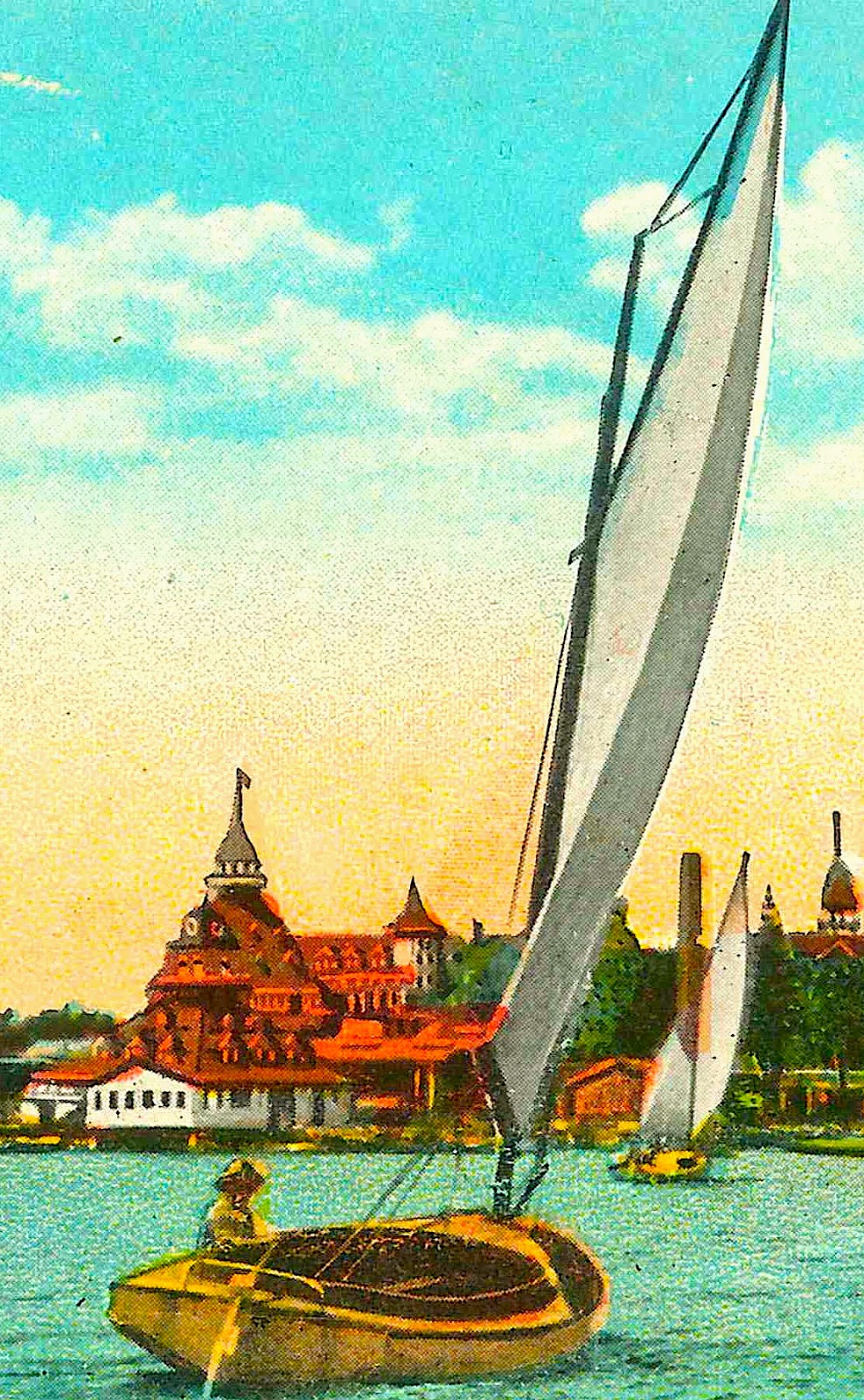 Sunny surprise
I searched for months and suddenly the
house shown above appeared. The first
home that even slightly resembled our
Montana manse, it was built by sugar
king Claus Spreckels on the island of
Coronado off San Diego circa 1908.
I started to research other area stucco
homes built post 1900 and soon found
several more. Each had a unique look
and felt quite different than the homes
being built elsewhere at the same time.
Oddly... they all looked very similar to
our home in rural Montana. Hmm... 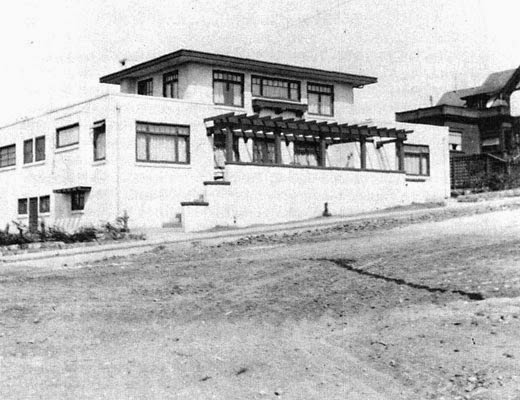 The Gregg House (shown above) was also built in 1908 and featured an
inset terrace similar to the one on our home's original architectural plans.

Built on Coronado again in 1908 was the H.B.Hakes home (shown below)
again featured an inset terrace. While not quite a match it appears familiar... 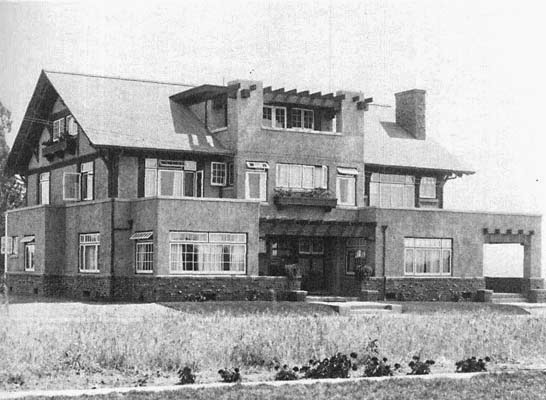 The rear facade of the 1908 W. F. Dummer home on Coronado (above)
again appears similar to our home. It's floor plan is almost identical.

Again, the 1908 Titus home (shown below) shared similar characteristics
to all of the homes and our Lewistown Passion Pit. How odd is that? 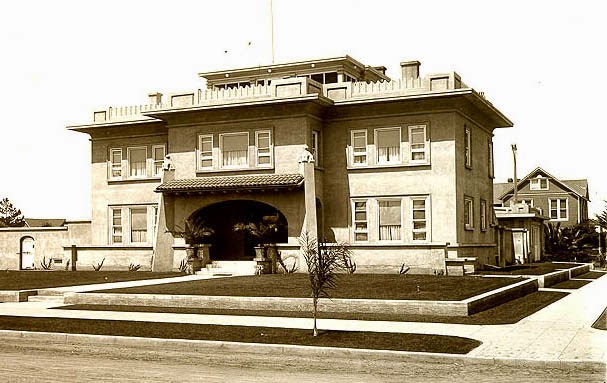 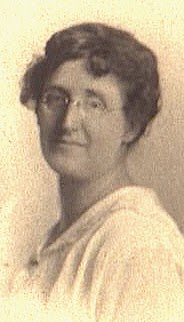 The first snow bird?
To recap, I found virtually no other homes
that even slightly resembled our home but
for this cluster in the San Diego area. Could
there have been any sort of San Diego and
Lewistown connection? Then it all clicked.
G, W. Cook's eldest child, Elizabeth (left)
moved from Lewistown to National City
California (a suburb of San Diego) in 1909.
Her husband Arza was an osteopath and he
opened a practice there. A San Diegoan for
the rest of her life, her family is still based
there. Could they be a link between rural
Montana and sunny California?! BINGO! 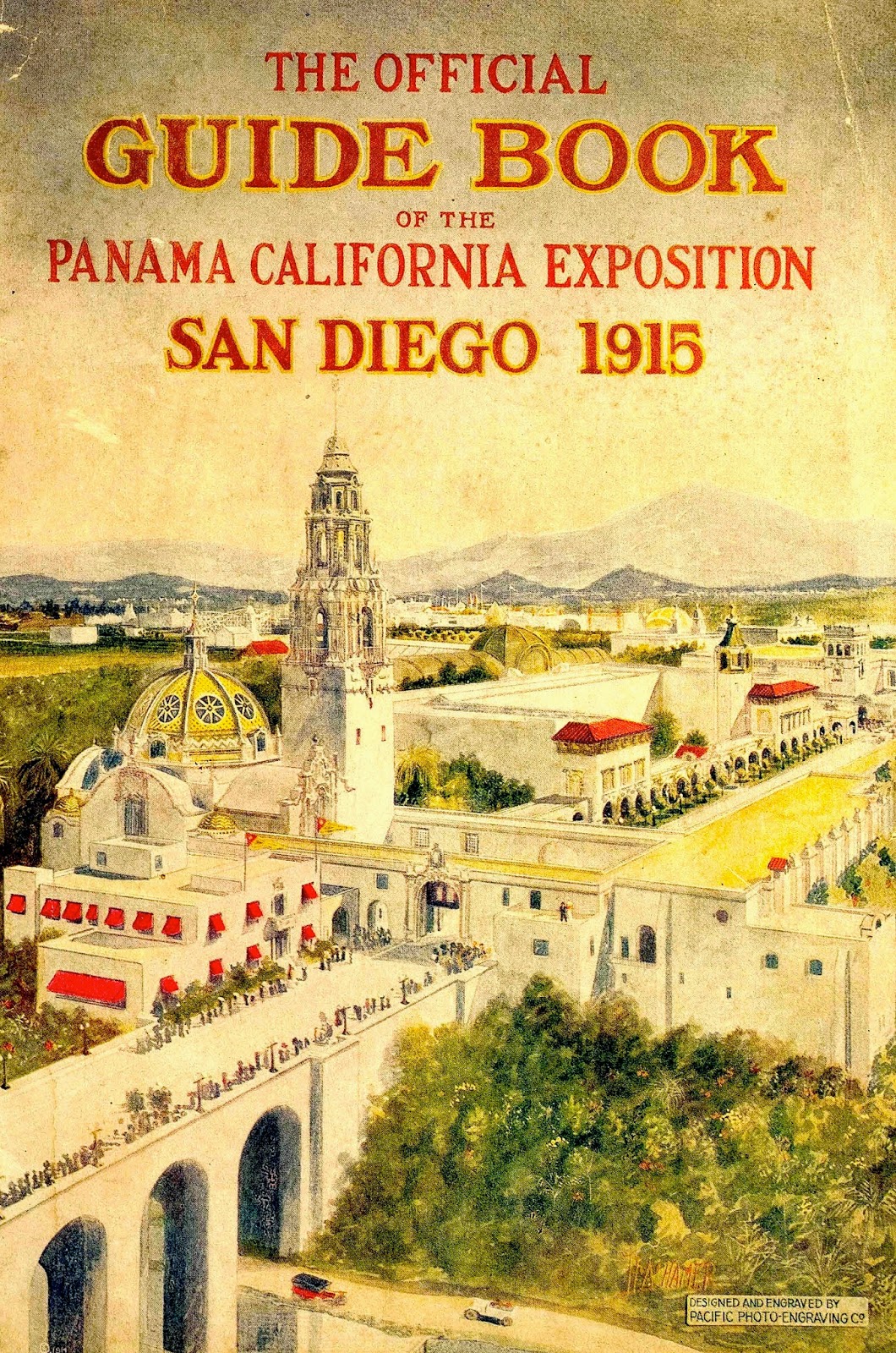 To be determined...
In this period, many affluent Montanans
wintered in California. The World's Fair
of 1915 was held at Balboa Park on the
bay of San Diego. Still today most of
it's buildings stand in all their stuccoed
glory. Does it make sense that maybe
George and his wife Emma visited their
daughter Elizabeth and her family after
their move? And that said trip may have
architecturally inspired a veteran realtor
and developer? I can't help but surmise
that this might explain the Passion Pit's
rather unique appearance. Hmm...
Posted by montanaroue at 4:00 AM