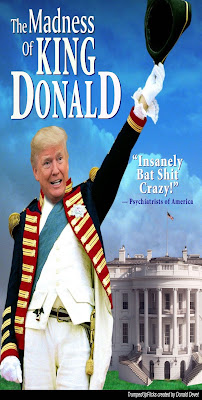 Mad about the boy
Someday they're going to make a movie.
About a deranged tyrant who slowly and
then completely loses it. As in their mind.
Oh... wait a minute. They already did. It's
title is "The Madness of King George." A
play and film which recounts England's
royal battle with insanity. However more
important, it chronicles the reaction and
inaction of his coterie. As they all ignore,
celebrate, and hide their ruler's declining
mental health. Which is what is going on
in our White House. For reasons beyond
our control Donald Trump has gone mad. 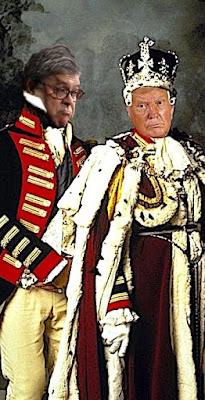 Delusions of grandeur
Now as in the film (and history) his family,
friends, and acolytes are scrambling. Each
doing the bidding of a mad man. Lying for
him upon demand. Hiding the evidence. Or
worse, celebrating his mania via recordings
released it to the media. Most of us sit back
in shock as we watch the debacle unravel.
Some try to ignore his antics. Others expose
themselves to infection. And a few... cower
in the shadows. Fearful of what will happen
next. All guilty of disservice to both their
leader and the country at large. A flock of
black sheep willingly being led to slaughter.

The truth be told
Now they are going to empower a seventy
four year old, paunchy white guy. Already
diagnosed and hospitalized with Covid 19.
To hold an election rally in Florida. Where
coated with with makeup and dosed with a
plethora of pills he'll revel in the adulation
of his loyalists. Spewing hate, dissension,
lies, rumor and innuendo worse than ever
before. Another stop in our national journey
into madness. Will he crumble before us?
Or take us all down with him? One thing is
certain, someday the truth will come out.
And trust me - it will be one hell of a story.

Posted by montanaroue at 6:36 AM