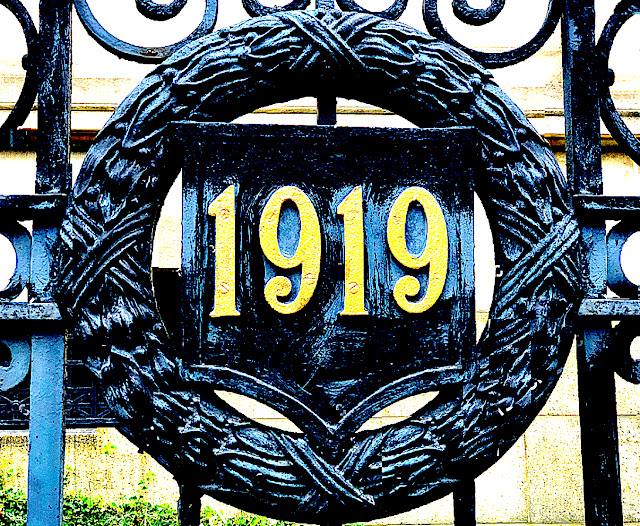 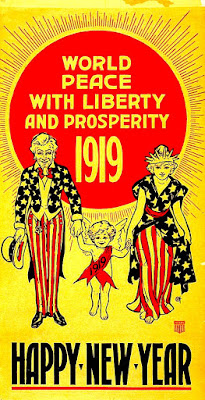 History repeats itself?
In hindsight some battles never seem to end.
A century ago Russia was engulfed in a civil
war. Far south America fought with Pancho
Villa on our Mexican border. As Afghanistan
natives battled British forces, Syrians fought
their French oppressors. And in Iraq, citizens
revolted against the Versailles Treaty leading
to a revolt agains British rule the following
year. A century later we continue to fight in
these same regions and more. Which causes
me to wonder why we assume that America
can alter a long established course of conflict.
Will we ever learn our history lessons?! 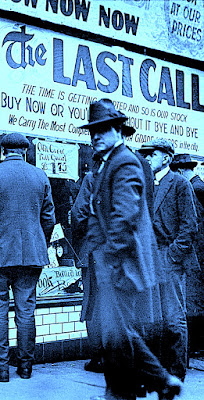 January 16, 1919
One hundred years ago the 18th Amendment
was ratified. Said dictum outlawed producing,
selling, and consuming alcohol. Fortunately
Americans had a full year to dry out before it
went into effect in January of 1920. Creating
a boom in liquor sales as many stocked their
cellars with enough booze to last for decades.
Ultimately this attempt to limit the intake of
Americans was a dismal failure. The end result
being a dramatic increase in the consumption,
illegal production (bootlegging), and criminal
activity related to alcohol. Thus in 1933 this
attempt to legislate morality was repealed. 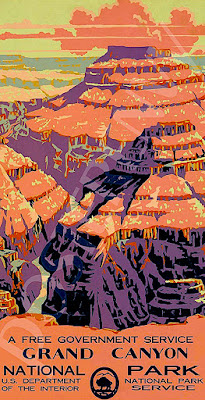 February 26, 1919
From the 1880's on many leading Americans
attempted to gain government aid to preserve
Arizona's Grand Canyon. Post visits President
Theodore Roosevelt declared this geological
treasure to be a national monument in 1908.
Finally in 1919 the United States Congress
passed legislation to make it the 15th United
States National Park. In the century since it's
1,217,262 acres have been both treasured and
protected. Also a UNESCO World Heritage
site, the park hosted over six million in 2017.
One only hopes that our government closure
ends prior to its 100th season start this May. 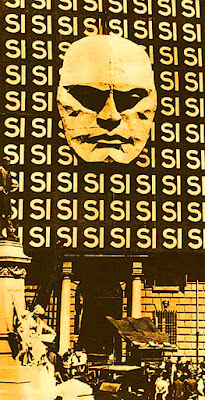 March 23, 1919
Post military service Benito Mussolini became
an ardent socialist. As a journalist he called for
a dictator to assume control over Italy. In 1919
he founded a paramilitary Fascist movement in
Milan. The dissolution of parliament in 1921
fueled his election as Prime Minister in 1922.
By 1925 he assumed full dictatorial control of
Italy. Called "Il Duce" (leader) his dictatorship
lasted until Italian and Nazi forces met defeat
in 1945. Soon thereafter he was shot by Italian
soldiers. His corpse hung in effigy in Milan in
order for countless Italians to kick and spit at
it in retribution. Oh how the mighty will fall! 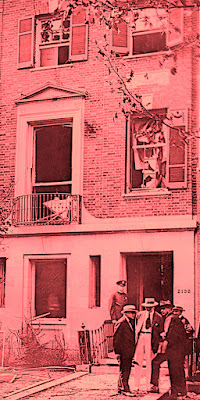 April 30, 1919
History repeats itself. In the spring of 1919
thirty six dynamite filled and booby trapped
bombs were mailed to a variety of American
politicians and leaders. Which included the
U.S. Attorney General, Secretary of Labor,
Senators, Congressmen, Governors, Mayors,
a Supreme Court Justice, J.P Morgan, and
John D. Rockefeller. In June eight bombs
ignited in eight cities. All attributed as the
work of followers of Luigi Galleani - the
already deported Italian anarchist. Bombings
continued through 1920 ending with a Wall
Street bomb that killed thirty two bystanders. 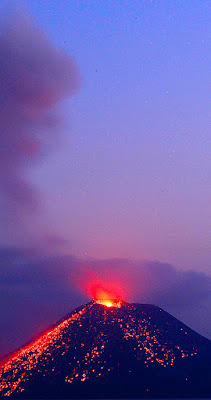 May 19, 1919
Undersea volcanic activity near Indonesia's
Sundra Strait recently caused a tsunami that
killed at least two hundred and eighty one.
While devastating, said disaster pales when
compared to the 1919 Mount Kelud volcanic
eruption in Java (Indonesia). Releasing 38
million cubic metres of water from a crater
lake forming lethal lahars. Streams of mud,
water, and debris traveled that at least forty
kilometers to destroy one hundred villages
and kill 5,160. For over six centuries Mount
Kelud has erupted thirty times killing fifteen
thousand. So the question is not if but when. 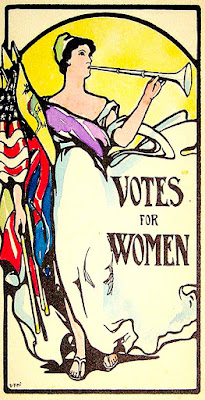 June 4, 1919
Since the dawn of time the battle of the sexes
has driven gender inequality. First introduced
in 1878 - the 19th Constitutional Amendment
was finally submitted for ratification a century
ago. Which reads "The right of citizens of the
United States to vote shall not be denied or
abridged by the United States or any state on
account of sex" However it wasn't over until
August1920 when American women finally
gained the right to vote. A century later, the
"me too" movement exposed our continuing
legacy of assaults against gender equality.
Exactly when will all of this foolishness end? 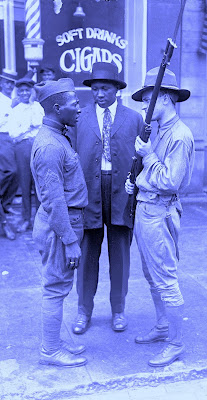 July 27, 1919
Recently we mourned eleven Jewish Americans
who were murdered in a Pittsburgh synagogue.
Proving that prejudice and hate still challenge
our democracy. In the summer of 1919 racial
turmoil erupted into a riot in America's second
city. On a summer afternoon a black teenager
dared to violate the unofficial segregation of
Chicago's beaches. Post being stoned by irate
white youths, he drowned in Lake Michigan.
His murder provoked a week of racial strife
ending with 15 whites, 23 blacks dead, 500
injured, and 1,000 black families homeless.
A century later hatred still challenges us ALL.

August 31,1919
On this day the American Communist Party
was founded post a split from the American
Socialist Party. Playing a prominent role in
the American labor movement throughout
the 1920s - 1940s. It's membership peaked
in 1942 at eighty five thousand. Post World
War Two and the subsequent cold war, plus
anti-communist attacks from leaders such
as Senator McCarthy - the party met with
disfavor. Ultimately the Soviet Union and
later  Russia became our avowed enemies.
Thus even if our President disagrees, we
continue our fight against "red" influences. 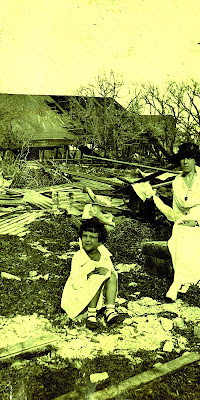 September 10, 1919
In August 2018 Hurricane Florence wreaked
havoc across the Carolinas. Soon thereafter
Hurricane Michael literally erased Florida's
Mexico Beach community. In total 116 were
killed during the hurricane season of 2018.
Whereas the 1919 hurricane season ended
with 828 deaths. Of said total 772 died when
a hurricane fell upon the Florida Keys. One
important thing to note is that back then the
Keys were far less populated. Per the 1920
Monroe Country census Keys population
was 19.550 versus 79,077 in 2010. Reason
enough to hope history never repeats itself.

October 16, 1919
A hundred years ago another disenfranchised
soldier uttered his first oratory to the German
Workers Party. Adolf Hitler's subsequent rise
to power surprised the world at large and led
to World War Two. His rabid dogma of hate,
derision, and prejudice seems all too familiar.
By the end of his reign over 3.2 million Jews,
gypsies, homosexuals, and political prisoners
were dead. Plus over 70 million military and
civilians killed in the battle to protect Europe,
Africa, and Asia from his dictatorial advances.
Which bodes the question, what if some brave
soul had stepped up and shut Adolf up in 1919? 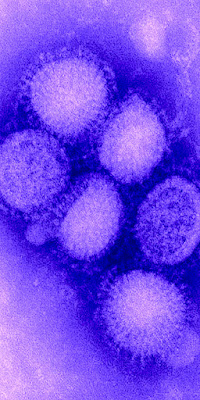 November 30, 1919
From its start in the spring of 1918 "Spanish
Flu" killed over at least five hundred million
worldwide. Including 675,000 in the United
States alone. Leaving more U.S. servicemen
dead in the hospital then on the battlefield.
By 1919 health officials felt able to announce
that the crisis over. Yet even today nobody
has yet to find a way to prevent or eliminate
viral flu outbreaks. The last three decades
show that flu deaths in America ranged from
three to forty nine thousand annually. Which
is more than enough motivation to seriously
reconsider still getting a flu shot this winter!

December 21, 1919
In an effort to silence their enemies, United
States officials deported Emma Goldman
along with 247 other "radial aliens" back to
Russia. An American citizen  "Red Emma"
was considered an advocate for anarchy,
free speech, free love (birth control), and
worker's rights. Convicted of association
with failed assassinations, bombings, and
other acts of aggression she actually was
a believer in non-violence. Post her death
in 1940 she is now revered as a voice for
the oppressed. Therefore many remember
Emma and forget those who banished her.
.
Posted by montanaroue at 4:00 AM