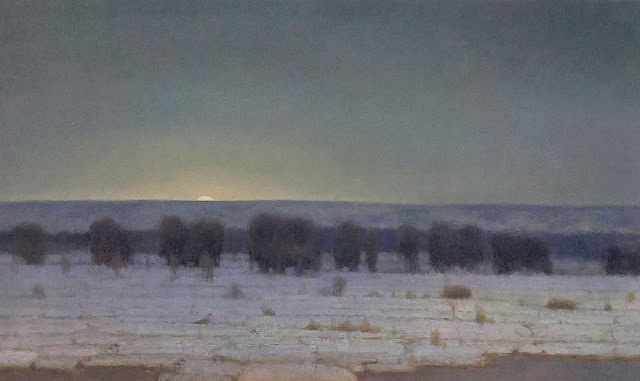 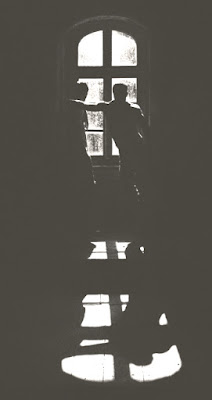 Cool whip
It has snowed in Central Montana for almost
a week. During such dark days of winter it's
easy to get the blues. However looking out
our window, grey is the tone du jour. Given
it's one of my favorite hues I enjoy being in
such neutral territory. Whether one spells it
grey or gray - this most medium of colors is
always elegant. From charcoal to pewter to
silver to gris - almost all of us can happily
find our gray space. Which has me thinking
of grey rooms past and present. You see,
even the best of us occasionally use smoke
& mirrors to improve our surroundings. 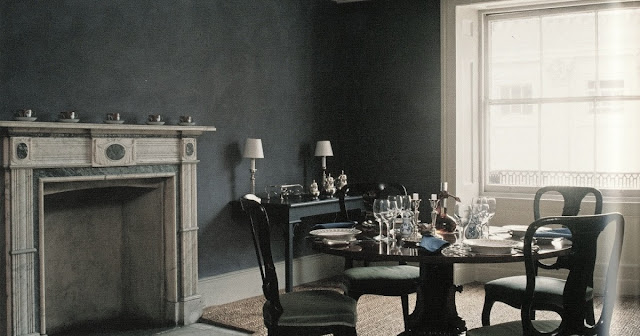 Pearl district
Born an impoverished blue blood, Pauline Potter
leveraged pedigree, looks, and impeccable taste
to become a style icon. Post bagging Philippe de
Rothschild the now Baroness created a sensation
with their townhouse on East Seventieth Street.
It's piano nobile was lined with fragrant camellia
trees in wooden tubs. Leading to a drawing room
lacquered the smokiest of grays. Diana Vreeland
likened said hue to the inside of a pearl. But in
truth it was inspired by an Hermes umbrella. In
the end it took the bluish slate grey dining room
in her apartment at the Albany (above) to show
that less can absolutely be more than enough. 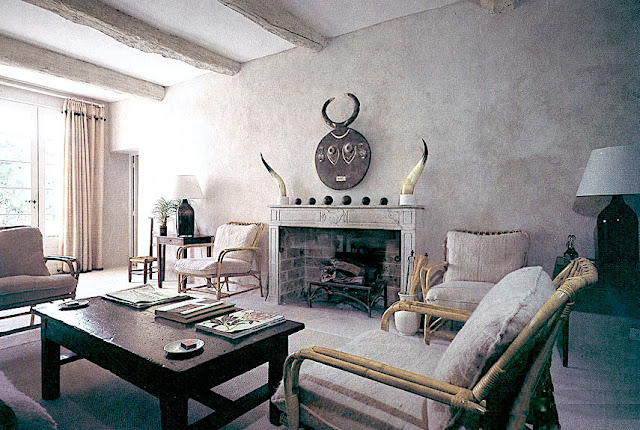 Next to nothing
Van Day Truex was literally born in the middle
of nowhere - i.e. Delphos, Kansas. Early on his
parents rejected their son's "artistic" tendancies.
However his aunt, a savvy founding associate
of Mr. J.C.Penney encouraged said proclivities.
Ultimately this handsome devil attended and
later ran Parson's School of Design. Post his
first visit to Paris - Van lived much of his life
in France. It was there in the village of Gargas
that a farm boy from Kansas created one of the
iconographic rooms of the twentieth century.
Which was a sea of gray - not grass. Proving
that you can take the boy out of the mid west. 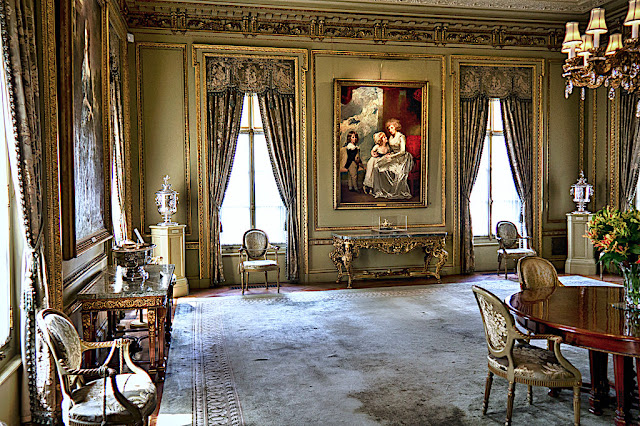 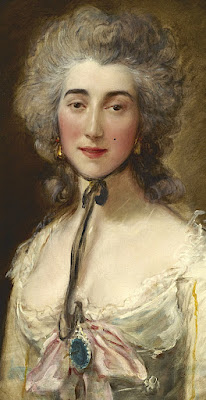 How firm a foundation
"French Grey" is the most classic of neutrals.
At the Frick Collection on Fifth Avenue. Sir
Charles Allom (Buckingham Palace decorator)
swathed it's public rooms in classic eighteenth
century French tones. The dining room walls
are a pale greenish gray. Upholstery, carpets,
and drapes in a cooler version that creates the
most neutral yet elegant of spaces. The perfect
background for Gainsborough's portrait of
Grace Dalyrmple Elliott. A Scottish courtesan
and English spy during the French revolution.
Several centuries later, her grey demeanor
continues to suit the elegant lady quite well. 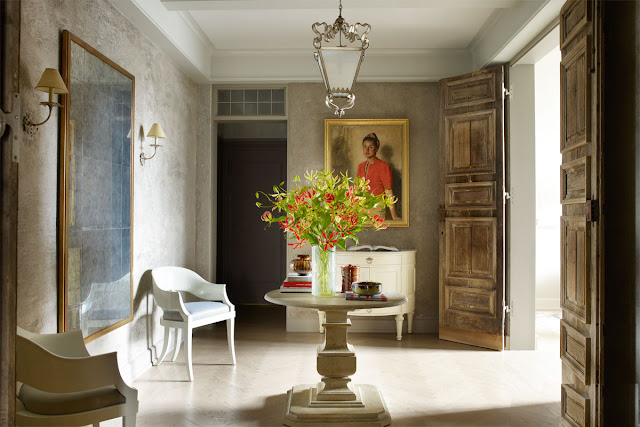 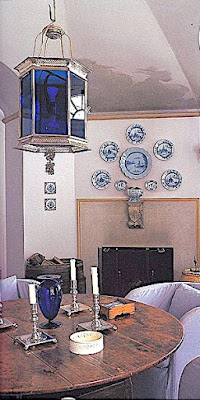 Tabula rasa
I've always had an affinity for the work of John
Saladino. His timeless interiors transcend time.
Blending the past with the present in his own
transformative way. Saladino plays color against
neutrals such as grey. This breakfast room (left)
at his home in Connecticut is a perfect example.
Cobalt blue and a delicate lilac hue are perfect
foils to subtle gray. The Montecito foyer shown
above uses pops of scarlet to accentuate it's solid
yet elegant foundation. Demonstrating yet again
that less is more. Especially when highlighted
against a perfectly blank grey slate. Suddenly
what's more than old is all so new. 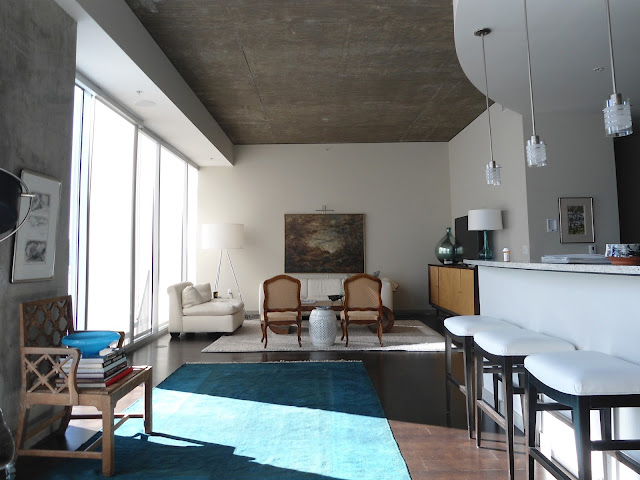 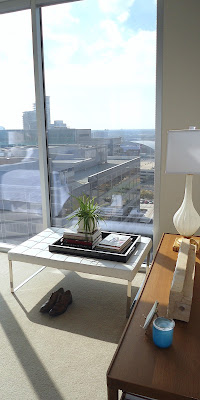 Through the glass lightly
In Dallas we lived in a building appropriately
called "The Glass House." Every exterior wall
was floor to ceiling glass. The sixteen foot tall
ceilings were left rough concrete while interior
walls came already enrobed in a most elusive
shade of grey. Changing their tone depending
on the time of day and the light thereof. ALL
looked great against this ever evolving palette.
Wood shone, paintings popped, color glowed.
Even it's residents were transformed. Hence
while modern, it was cozy and warm. Which
is why I painted my Montana office the same
tone. At my age I need all the help I can get! 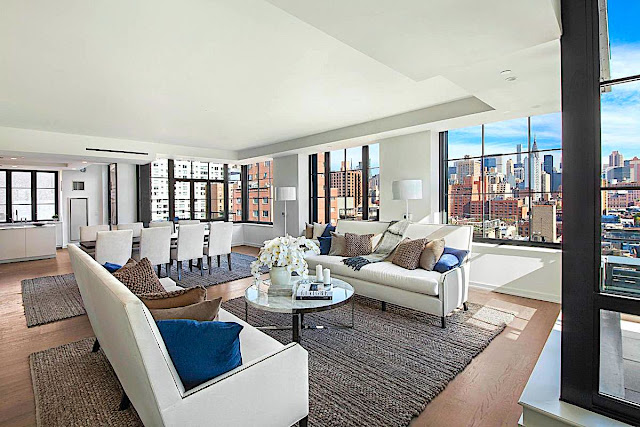 Then and now
A year ago a friend of a friend put their mega
SoHo apartment on the market. Decorated by
a famous designer - it was in essence a duplex
jewel toned box. After a plethora of showings,
her realtor called for a meeting. No matter how
lovely the space appeared in it's current state -
potential buyers couldn't see themselves living
there. Six digits later, it's former glory is gone.
And in it's place neutral territory. A sea of grey
and white opened the space and pocketbooks
of all who saw it. Post an immediate bidding
war - it quickly sold. Isn't it amazing what a
few cans of paint can do? Time to brush up?! 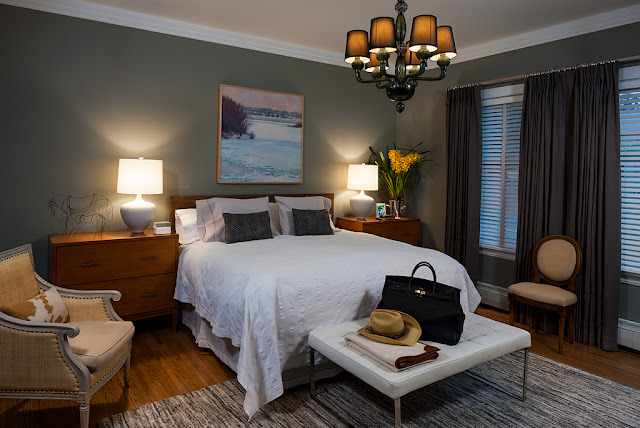 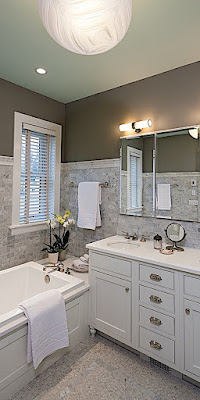 Now and forever
Like all things I'm certain that this current grey
phase will soon pass. However somethings are
classics and never go out of style. What I love
about grey is it's calming effect. For our master
bedroom we chose a mid range cool yet warm
Pratt & Lambert Grey entitled "half tone." It's
if nothing else the perfect setting for "chilling."
And also provides the perfect transition to our
bath which is enrobed in grey veined Carerra.
Somehow it works. So if and when gray falls
out of favor, I'm fairly certain we'll stay grey
until the future day when again it will be back
in style. BETTER SAFE... THAN SORRY!
Posted by montanaroue at 4:00 AM