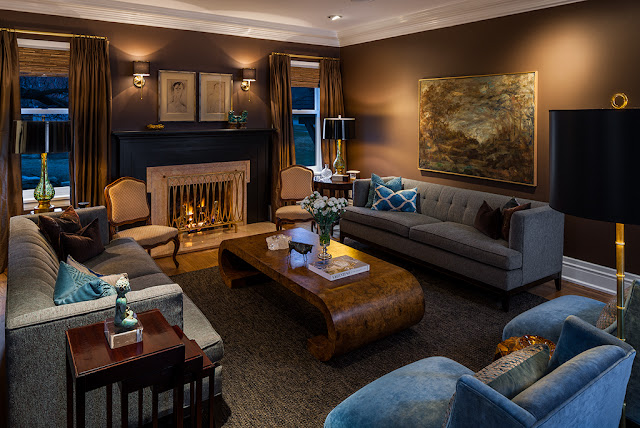 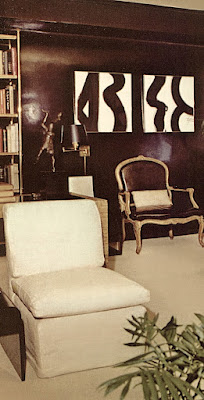 Dark victory
One of the first questions visitors ask upon
entering our Montana living room is "Why
did you ever pick this color?" Actually this
isn't our first journey to the dark side. Said
distinctive hue of tobacco brown was first
used by Billy Baldwin. Once deemed the
world's chicest decorator Billy transformed
spaces from the thirties through seventies.
Working for folks such as Diana Vreeland,
Cole Porter, Babe Paley, and Kitty Miller.
Yet he retired a pauper. Thus while his work
still inspires today, most Americans assume
he's some actor married to Chyna Phillips. 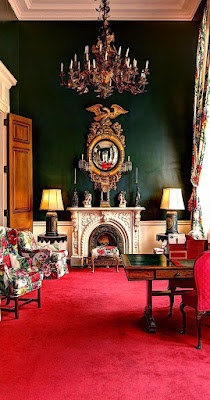 Dorothy Draper
Obviously there are no new ideas. However
there is always room for interpretation. And
all too often a different approach makes the
tried and true look new. Dorothy Draper had
a knack for combining traditional elements
in a bold manner. Most important she knew
that color has power. Hence her work at the
Greenbrier Hotel remains just as impactful
over seventy years post it's conception. Back
at Pratt my Light and Color professor taught
us that opposites attract. No wonder Dorothy
Draper played complementary red and green
against each other for maximum impact. 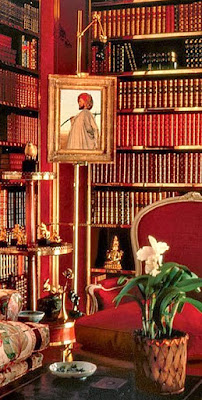 Albert Hadley
In my experience the esteemed Albert
was not the most pleasant of fellows. Yet
obviously he knew how to work a room.
With his business partner Sister Parish he
held reign over the interior decorating biz
during what some deem as it's golden age.
One of his most famous spaces was the
cinnabar lacquer and polished brass library
he created for Brooke Astor. Totally chic
it wasn't exactly new given Billy Baldwin
had done a brown lacquer version for Cole
Porter a decade or so before. Albert's take
was sleeker and hence new all over again.

Sister Parish
Mrs. Henry Parish II was to the manor born. In
need of some extra cash what was once a hobby
became a career as THE interior decorator. With
a listing in the Social Register she knew how to
transform almost any nouveau riche mess into an
old money manse. Having nothing to prove she
confidently mixed and matched all that she loved.
As the first lady of interior decorators it was no
surprise when she was Jackie Kennedy's first pick
for the White House. My favorite of her rooms is
Sister's New York living room where she mixed
light classics with bold dark brown lacquer walls.
Somehow she made Billy's brown look new...

David Hicks
Like Sister Parish, David Hicks had impeccable
credentials given his wife was a first cousin of
Prince Phillip. However Mr. Hicks was known
for his bold use of color and pattern. Starting in
the sixties he wowed the world. First via several
over the top ultra modern spaces. His geometric
carpets becoming "must haves" for any hipster.
Ultimately he embraced a much more classic
approach. Mixing old and new in an equally
bold manner. My choice from this period is the
yellow dining room at  Baronscourt - the Duke
of Abercorn's estate in Northern Ireland. His
mix of yellow, violet, and red was spectacular.

Diana Vreeland
As I stated earlier, color is a statement. When
the grande dame of all divas decided it was
time to redecorate she called her old friend
Billy Baldwin. Fashion icon, Fashion Editor
at Harpers Bazaar, and at that time the future
Editor in Chief at Vogue, Diana Vreeland had
a clear vision of what she wanted. Thus she
instructed her buddy to transform her living
room into "a garden in hell." Few would be
brave enough let alone chic enough to usurp
such a space. However till her death Diana
ruled supreme from her vermillion lair. Talk
about going out with a BANG!
Posted by montanaroue at 4:00 AM