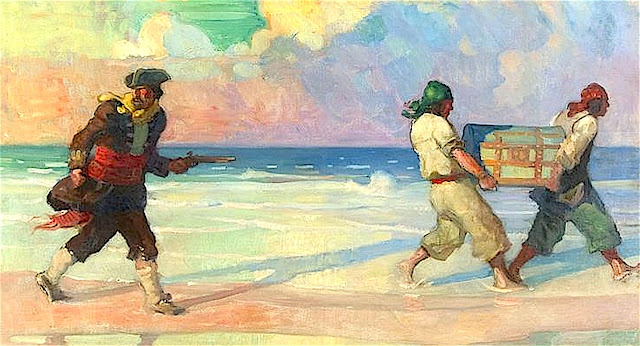 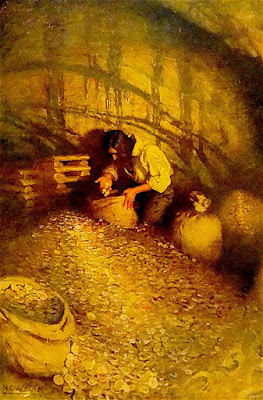 Lost and found
When all else fails I shop. On many
levels I know that I should focus on
one thing only which is "downsizing."
However when I'm down... nothing
lifts my spirits like acquiring some
sort of treasure. And when it comes
to discovering tidbits - I immediately
go to a place quite near to my heart,
eBay. Within said nirvana one will
find a veritable Aladdin's cave of
magical objects just waiting to be
taken home. And so while in theory
less is more... the more the merrier! 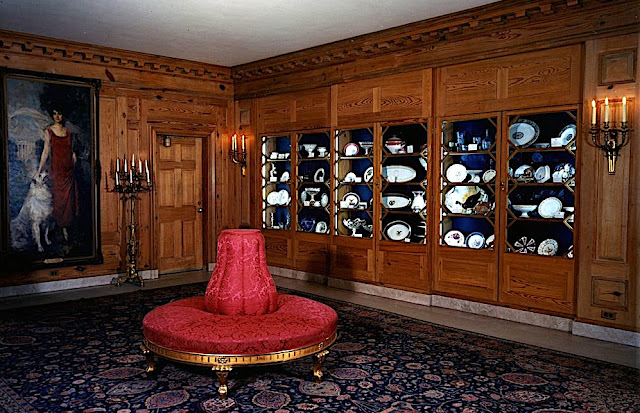 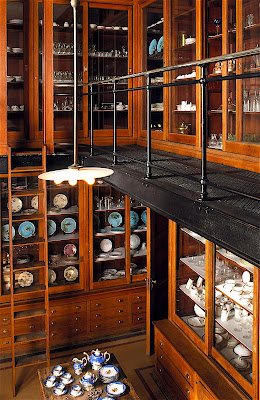 Hide and seek
The truth is I really don't need anything.
Yet nothing makes my heart beat faster
than something new... to me that is. You
see I really don't like new stuff. Rather
much like my men I prefer lovely things
that have a bit a mileage on them. Some
call it patina, but I adore that luscious
luster that something formerly treasured
by another carries. Said glow only adds
to it's appeal. Thus during tough times
I go to my happy place where I may not
purchase anything but can still dream of
what could be mine... and still might be. 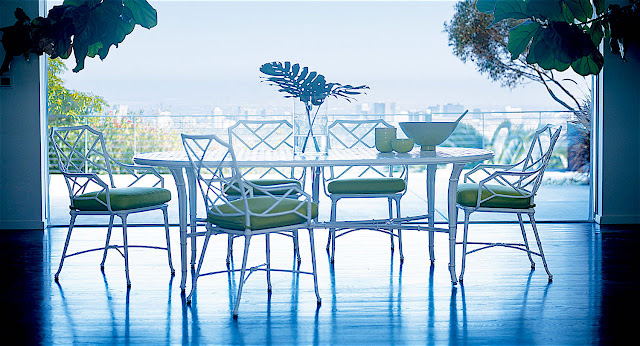 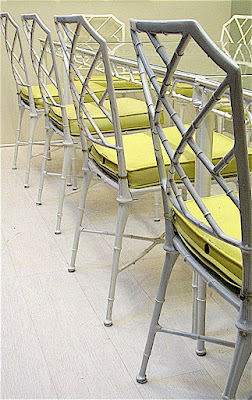 Oh Calcutta!
We're still in the process of finishing our
home's transformation. Last but not least
is landscaping. This summer we plan to
wall our rear garden and install a terrace
beneath the spreading branches of our
century old Horse Chestnut. Knowing
that we'll ultimately need some outdoor
furniture, I've been stalking the "vintage"
Brown Jordan Calcutta variety. Even if
faux bamboo is a tad exotic for Montana,
I love the stuff. However I don't love the
even more exotic prices it fetches. Thus
for the near future the hunt continues... 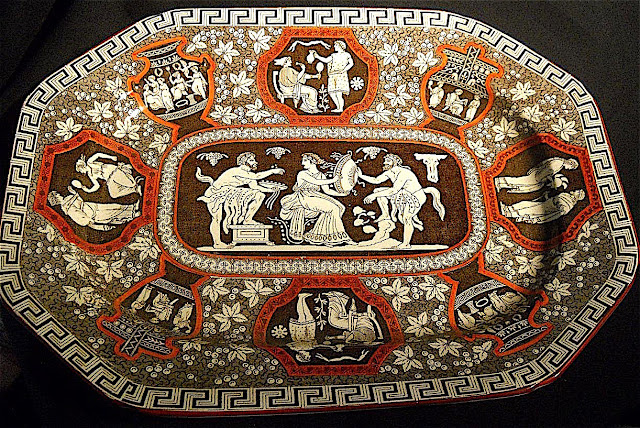 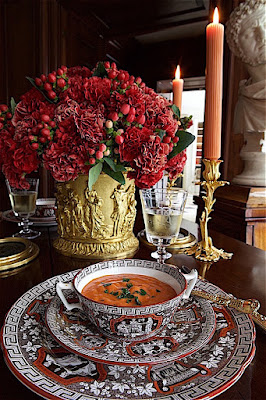 Greek to me
While it may seem ridiculous to even
contemplate adding another pattern to
my china stash, I may have found a
long lost love. I'm beyond consumed
with one of the oldest Spode patterns
called "Greek." It's tri-colored glory
is beyond charming. Enough so that
it was Bill Blass' favorite along with
Carolyne Roehm (her table is shown
on the right.) My quandary goes far
beyond the high prices said Greco
goodies fetch. The bigger question is
where would I possibly store it? 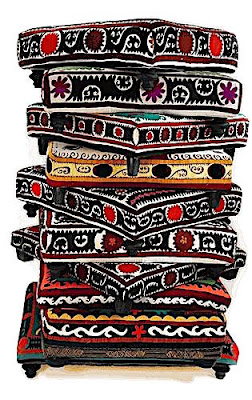 Bench mark
While almost complete, our home still
lacks some bits and pieces from here
to there. Upstairs in the North Guest
Suite there is a missing link within the
sitting room. My solution is to add a
bench or pouf to fill said void. Yet I'm
not willing to compromise on just any
standard solution. While I adore the
lovely bench shown above, it doesn't
work in any way shape or form. Thus
I know that ultimately the ottoman of
my dreams will suddenly appear. And
so until then I'll watch... and wait. 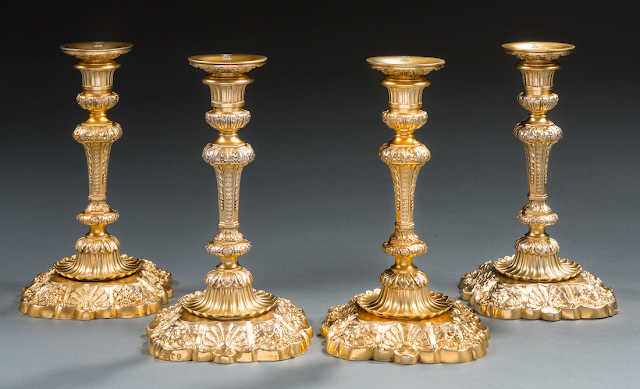 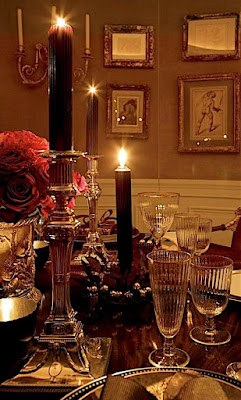 Sooner or later
The truth is I'm always looking. Well, for
certain missing links that is. I've got a list
of items that will either complete a set or
pair or fill an empty space. Daily I receive
eBay e-mail updates listing new items that
I may or may or may not need or want. If
and when they pop up one must jump at
the chance. Otherwise if you snooze you
lose. After waiting over three years for a
matching pair of silver candlesticks to be
listed they appeared. And before I could
pounce, they sold to someone else. Now
I wonder whether I'll get another chance? 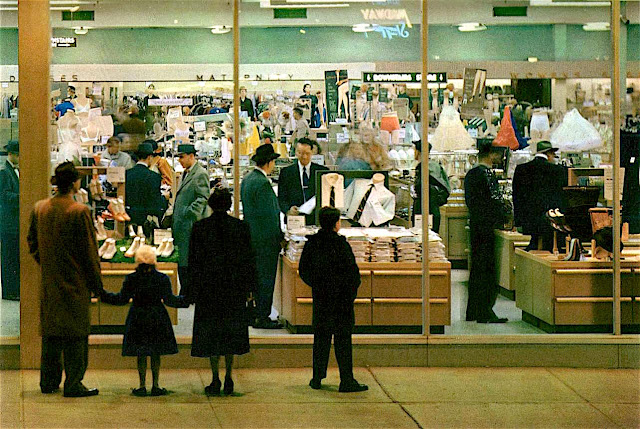 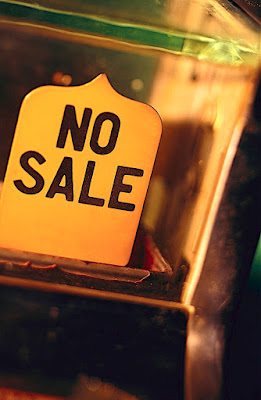 Satisfaction guaranteed
So far I haven't bought a thing. Hence
there are no recorded purchases on my
eBay account for the past two months.
However I've sold quite a bit. And so at
least for now the tide is going out rather
than in. And while I may love window
shopping, I'm more than happy to stand
on the outside looking in. If nothing else
living vicariously is affordable. However
whenever an opportunity arises, I've no
doubt that my virtual cash register will
ring. If/when true love finally appears
on-line, one must PayPal the piper!