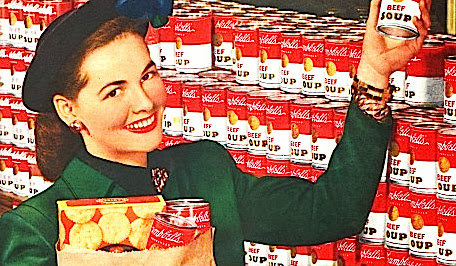 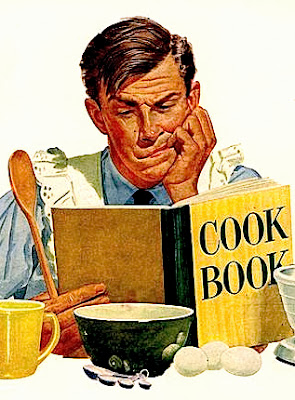 Soups on!
Today we're having a white out
here in Central Montana. Quite
literally a blizzard, there's not
much one can do. So I've put a
pot of soup on the back burner.
Proper potages are a matter of
taste. Frank's are simpler and
often tastier. Mine tend toward
fussy. Frank's grandmother had
a soup pot simmering everyday.
In todays world who has the time
to make something so simple?
There must be an easier way... 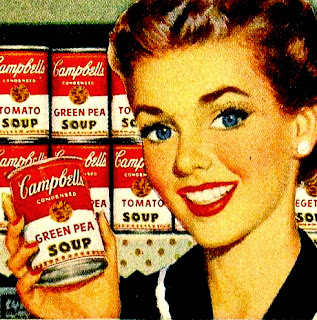 Just add water!
Most didn't grow up with home
made soup. Our Mother's peers
just opened a can of Campbell's
Tomato Soup and added a can of
milk. While equally comforting,
it never matched the satisfaction
of a savory home cooked brew.
Post war ladies preferred to get
the job done quickly, and then
move on to an icy cold Martini! 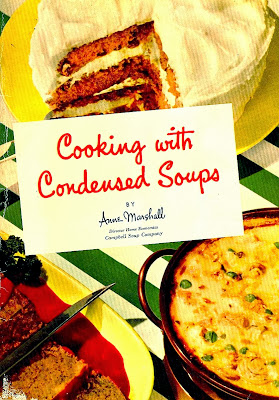 Mix it up!
It's amazing how much a part
of our lives Campbell's soups
were. Cream of Mushroom and
Celery were key ingredients in
all sorts of family faves. They
played the role of a savory glue
that bound all sorts of odd items
into magical casseroles. I consider
myself fortunate that my Mother
never subscribed to Tuna Bakes
or other nostalgic oven amalgams.
A classic WASP, Ethel preferred
everything boiled or broiled. 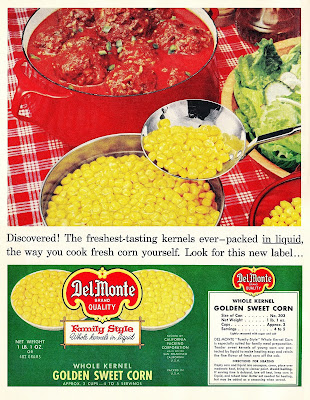 Veg All
When was the last time you ate
a canned vegetable? Most of us
grew up on them and it's fairly
certain that they were cooked
in aluminum (senility anyone?).
Ethel preferred to dish up over
cooked veggies that can only
be described as mush. During
one Thanksgiving feast I told
Ethel that the broccoli was not
cooked properly. My Aunt Millie
looked up and said "It must be
your piece, mine is nice and soft!" 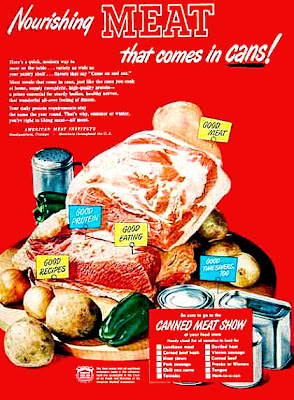 Pure Protein
Canned meat is certainly the most
repulsive of easy to serve options.
When we camped Ethel liked to fry
canned "Ham Patties". Their scent
and taste still tortures my memory.
Dad loved Deviled Ham and canned
liverwurst. Both of which looked to
me like somebody else had already
physically ingested and processed
it prior to canning. The worst item
was called "Potted Meat" and while
never served in our home, it always
scared me on the grocery store shelf. 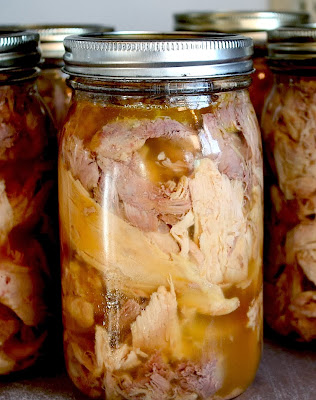 Perfectly Preserved
Today in Montana many of our
neighbors continue to home can.
Preserving summer's bounty for
the winter months is truly an art.
I have a closet full of pickles and
relishes that were made locally.
However I've never purchased a
any of the many local varieties
of "canned meat". Just looking
at the putrified chunks floating
in liquid disgusts me. While I'm
certain somebody else can make
something out of them, I'll pass. 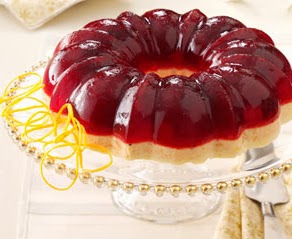 Turkey Time!
With Thanksgiving about to arrive,
it's appropriate to leave you with
this delightful gelatin concoction.
While strange to our 21st century
palates, it's a gentle reminder of
just how much cuisine has evolved
since our youth. What's better than
a picante jiggle on Thanksgiving?

Crush cranberry sauce with a fork.
Soften gelatin in a bowl of cold water;
Set bowl intp a pan of boiling water; stir until gelatin is dissolved.
Mix gelatin and cranberry sauce.
Pour on top of firm turkey layer;
continue to chill until cranberry layer is firm.
Unmold; serve on greens.
Posted by montanaroue at 4:00 AM