Everybody's got the fever... 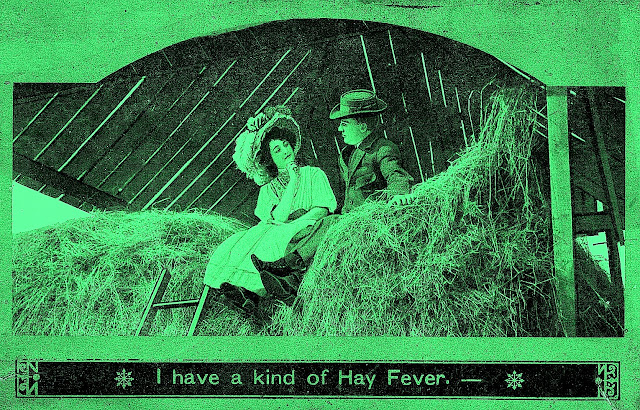 I GOT A FEVER THAT'S SO HARD TO BEAR! 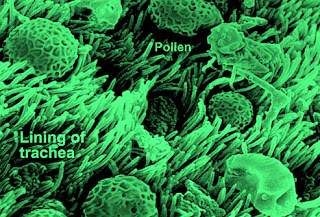 Stealth thistle?
It started rather innocently.
A discreet itching on the roof
of my mouth. At first I thought
it was the cantaloupe. Little did
I know that months of torture
loomed in the form of teeny tiny
microbes of noxious pollen. 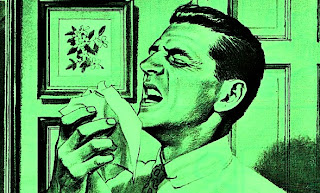 God bless me... please!
Slowly disaster crept in. The
inside of my ears started to itch.
Then, my eyes. Finally nature
unleashed a power no man can
combat. I started to sneeze...
and nothing could stop it! 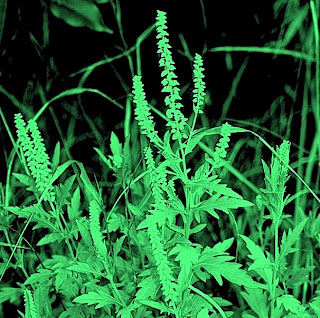 Hysterical Histamines?
Suddenly I realized that it was
Labor Day weekend and the
height of Ragweed season.
You see, my body simply can't
handle the domino effect that
is caused by this evil pollen.
An army of histamines arises
within to battle their evil foe.
The end result being endless
sneezing, wheezing, itching,
and blowing! I'm a mess! 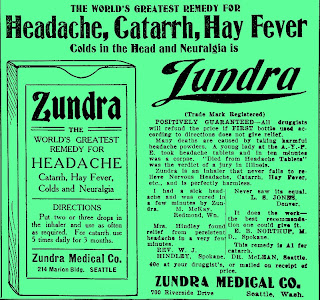 Snot the first...
I'm not alone in suffering from
this natural nuisance. Many like
me have wheezed as they tried
to overcome the plague like
symptoms that allergy attacks
bring on with a vengeance.
Now we have anti histamines
that seem to stop the sneezing.
While they help, I know that I
still feel lousy and a tad crazy! 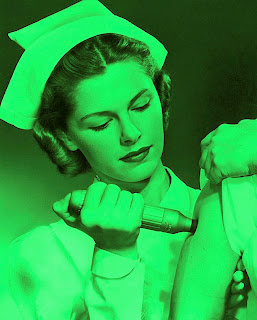 A shot in the dark.
One fall season years ago, I had a horrific
allergy attack. Sitting in a client meeting,
I looked down at my hands. Rather than
fingers, I saw massive bratwursts! As
I rushed home, the swelling continued.
After my admission to the hospital, they
intravenously flooded me with steroids
and anti histamines. For a few days I
totally tripped out. What an acid trip!
For many years after that, I cautiously
carried an epi-pen wherever I went. 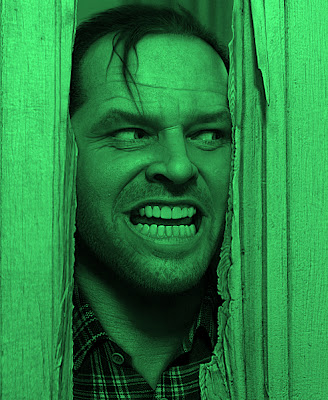 A dose of reality.
Living in Manhattan, I had not
experienced any indication that
Hay Fever or allergies were on
their way. It was only after my
arrival in Montana and a day at
the cabin that my Hay Fever
came on with a vengeance.
Hmm, could it have been those
weeds Frank was pulling up
and burning all day in the cabin
fireplace? Suddenly the asphalt
jungle sounds attractive. Think
I'll be fully medicated and stay
inside until after the first frost!
Posted by montanaroue at 4:30 AM