Did you know there was a strong connection between Lewistown
and France, the epicenter of all things cultural NOT agricultural?

The Metis were the original settlers of Lewistown.
Metis means "cross-breed" in French.
An indigenous race unique to North America -
they are neither Native American nor Caucasian, French nor Canadian,
Cree nor Chippewa. Rather they are a mix of them all. 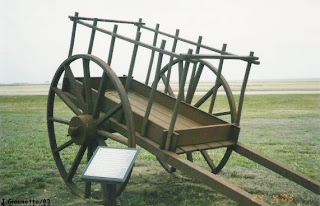 Nomadic, Metis lived in "Red River Carts". Made entirely of wood, with wheels up to six feet in diameter, one pony could haul up to 800 pounds. Given NO axle grease was used their noise was as insufferable
as it was infamous!

"It was as if a thousand fingernails
were drawn across a thousand panes of glass"
Joseph Kinsey Howard , Writer

In 1879, twenty-five Metis families squeaked down from Canada into central Montana. Settling along Spring Creek they hunted, traded, and grew to over 150 families. Francis Janeaux built a trading post and soon other merchants followed. This tiny frontier commercial hub later became Lewistown.

Every Labor Day the Metis return to Lewistown for a celebration.
It's an amazing way to experience what life was like here just 130 years ago.

For several years he built his case with the Bishop and his higher ups.
One morning in 1903 (after an eight day journey from Quebec),
the stage dropped off three French nuns. All members of Les Filles de Jesus
a sisterhood founded in Brittany in 1834. Today we will focus on the hospital.

By January 1904
the sisters were treating patients in a converted log cabin. 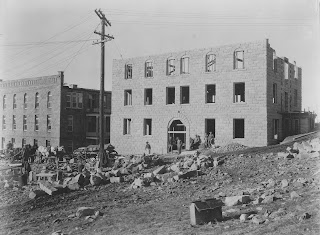 A 30 bed hospital was opened
in the Fall of 1908. Standing high on a hill overlooking town - this stone edifice was built by Croatian stonemasons. Within it's walls was a fully equipped surgery, sterilizing rooms, heating plant, morgue, and vast kitchens. 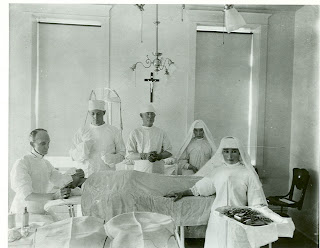 For over 70 years the sisters helped heal the sick throughout Fergus County. Saint Joseph's hospital grew to become the regional healthcare hub. Ultimately it was deemed obsolete and a new facility was built. And sadly, this monument to charity closed it's doors. 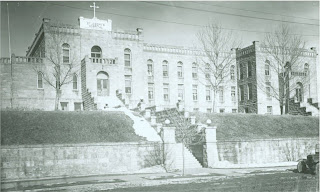 But miracles do happen. Several years later it was developed into a condominium complex called Fountain Terrace.  Today Frank and I reside in the former surgical suite complete with fabulous mountain views from every window.

The ultimate French connection involves a sheep rancher from Grass Range.
32 miles from Lewistown, mostly ranchers and sheep call this place home.
Local boy Bill Stockton was drafted into the Army during World War II.
While stationed in Paris he fell in love with art and... a pretty mademoiselle.
They soon married and stayed in Paris post war so that Bill could study art.

Finally in the 50's it was time to return to Montana and run the family ranch. Running sheep is brutal, tough work. But leaving the city of lights for a town of 109 was probably even harder.
How did Bill prepare his jeune fille for that transition? Fifty years later, her voice still thick with a charming
french accent, his wife "E"
recounted this conversation -
So I ask Beeel,
"Is it cold in Mont-tah-na?"
And he seez...
"Oh no my love, it is always beautiful!"
When I get there I tell him...
"You are a dirty, stiiinking LIAR"!

Throughout the balance of his life Bill created a body of remarkable work. Using livestock markers, oils, watercolors, or iron nails from the barn - He created abstract paintings and dynamic sculptures that capture the essence of life on land he loved.
Click here to learn about Bill...

Today "E" still lives in Montana.
Her love for Bill
remains as strong as ever.

But...
I think her love for Montana
has over the years
grown to be almost as strong.

Montana is a wild
and wonderful land.
At times harsh.
Often beyond lovely.
And...
no matter the weather,
it always surprises.

Otherwise...
why would
you ever
leave Paris?

Posted by montanaroue at 7:03 AM