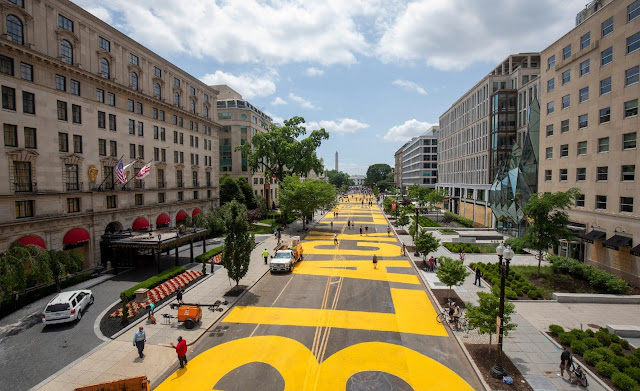 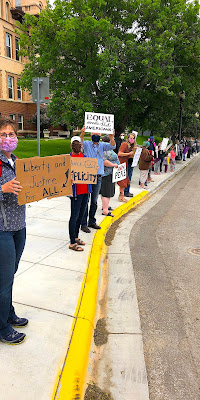 Anyplace but where?
For many in Fergus County Montana it's hard
to understand what all the "fuss" is about. Our
white population of 96.6%. African Americans
representing just 0.2% of our community. Way
out west non native "settlers" didn't arrive here
until over a decade after the Civil War's end.
Hence from our very beginning racial tension
has been seemingly not a local issue. Ignorance
may be bliss for some, however it's still not an
excuse for doing nothing. Which is why Frank
and I joined over fifty strangers, family, friends,
and neighbors in protest against racial prejudice,
bigotry, and inequality last Saturday. 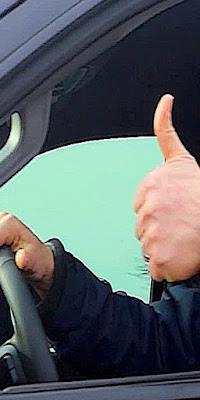 United we stand
Not only is Fergus County mostly white, it is
also very red. 73.1% of locals voted for Mr.
Trump in 2016. Hence taking such a stand
in such a place might seem risky. However it
was in fact an amazing experience. Especially
as the overwhelming percentage of those who
drove past us were supportive. Honking their
horns, waving, and giving us thumbs up. Proof
that anywhere can change given our world at
large is evolving. Could it be that mankind is
ready to confront our darkest secret? Racism
in all of it's horrible, perverse, hateful, and
unfair reality ain't pretty. Is change coming?

Reality check
All Americans do not have the luxury of looking
the other way. Of ignoring wrongs done to some
Americans simply because of the color of their
skin. Ignoring such crimes against humanity has
allowed it to fester hidden beneath the surface.
Reinforcing that "liberty and justice for all" has
in truth been a farce for many. If all are created
equal, then those who violate that equality must
be stopped. Along with the laws, and bias that
insure some maintain a competitive edge. Thus
even if one has never personally seen prejudice,
we can no longer continue to be blind to all of
its' cruelty and hatred. Or our roles in its legacy. 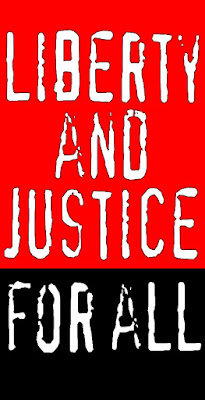 Equal but different
Some suggest we simply "just say no". Which
is exactly what many Americans have been
doing across this great country. United in a
show of strength and unity. All in an attempt
to fulfill the promise that our slave owning
founders made long ago. To end four hundred
years of cruel inequity. And to insure that each
and every American gets what they deserve.
So wherever you live, whatever you are, the
only thing that matters is doing whatever it
takes end purposeful racial bias. Day by day,
step by step, law by law, and prosecution by
prosecution. Liberty and justice for ALL!
Posted by montanaroue at 4:00 AM