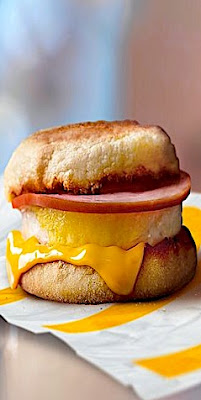 On-line shopping
I have a confession. A dirty little secret. Which
is that there is little I adore more than a number
one. As in Egg McMuffin meal. Said savory
sack includes the sandwich itself, an elegant
slab of deep fried "hash browns", and a boiling
hot black coffee. All from that American icon
McDonalds. In the old days when I was trying
to impress folks I would ask my faithful admin
to buy one (or two) for me. A task that honestly
she wasn't all that happy to do given she tried
her best to monitor my intake. Nowadays I join
a large portion of Lewistown locals who start
every day on line (as in the drive through).

Instant gratification
I'll admit it's quite a picture. A former fat cat
(one who could lose 100 pounds) in a rather
well preserved Jaguar. In line with pickups,
SUV's, and the like. Yet at least once a week
I join the queue. Eager to get my "fix" before
I open the store on Wednesdays. The ultimate
in comfort food, McDonalds rarely surprises.
Even when I occasionally go astray. And order
a Chicken McGriddle. Which is quite tasty but
of a questionable nature. However the other
day something happened that blew my mind.
Making my day all the better. The lady in
the car before me BOUGHT ME breakfast. 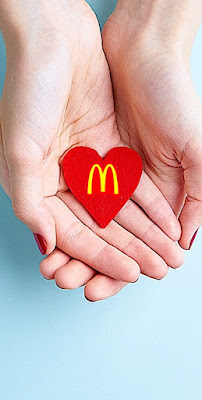 Fast forward
Old enough to know better I had no idea that
things such as this happened. Therefore I did
the same for the gentleman behind me and so
on. Apparently said largesse is called "paying
it forward" which actually is the ultimate back
handed compliment. A phenomena sweeping
America during this covid crisis. In Atlanta,
a famous eatery auctioned off its collection
of art. Giving the proceeds to the owners of
a Mexican restaurant down the street. All in
an effort to make this world a better place. So
it seems to me we all have more than enough
to give. Why not "pay it forward"?
Posted by montanaroue at 4:00 AM