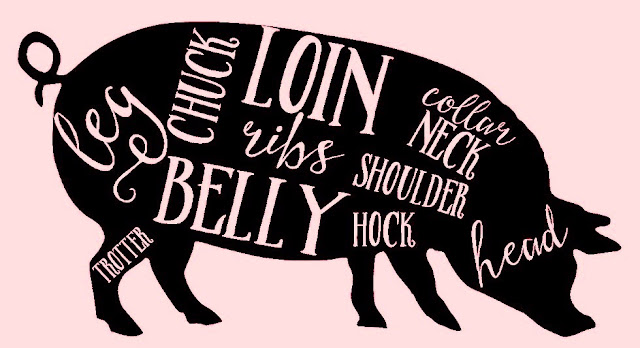 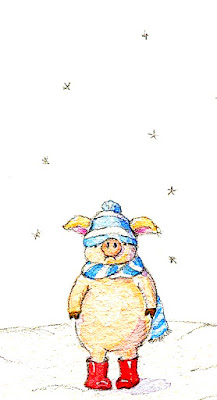 Pig heaven
Lately the thermometer in central Montana
hovers below zero. Which is motivation to
stay in the kitchen. As per yesterday's blog,
I've recently been focused on what to eat at
home given we're NOT inclined to dine out.
Thus I've been churning out a plethora of
tried and true recipes that not only warmed
our hearts but also satisfied our appetites.
As I've often said I love pork. Thus recently
we've made pigs of ourselves. Most mornings
Frank makes us a big breakfast. What better
wakeup call than bacon or sausage sizzling
in a skillet? From there it only gets better... 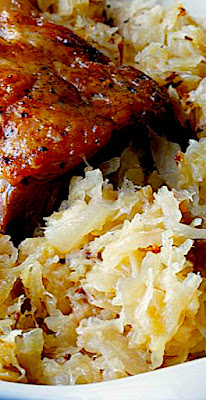 Somethings bacon
While the weather outside may be frightful,
there's no lack of projects to keep me busy
inside. Hence ambitions of my cooking up
a storm amidst a literal blizzard have yet to
come to fruition. Instead I've relied on easy
yet tasty options. One of the few positive
things I retain from my time in Columbus
Ohio is the simplest yet best of pork roast
recipes. In a covered casserole mix chopped
onion with a jar of sauerkraut (rinsed) and
a tablespoon of caraway seeds. Place a pork
loin roast on top. Lay sliced bacon over it.
Cover and bake at 350 for 90 minutes. 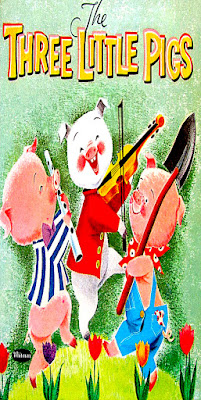 Chop chop
How can something so simple be so amazing?
The older I get the less inclined I am to "goop"
things up. Less is more especially if one uses
quality ingredients. This summer our nephew
"J" raised three pigs. All who became Frank's
"friends" who he visited (and fed) frequently.
Finally late in the fall they met their maker.
And for Christmas we were honored to receive
multiple chops from Frank's now lost buddies.
A few weeks later we defrosted them overnight
in a salty brine. Once dried and seasoned, we
fried them in some olive oil in our beloved cast
iron skillet. The result? Pure porcine perfection! 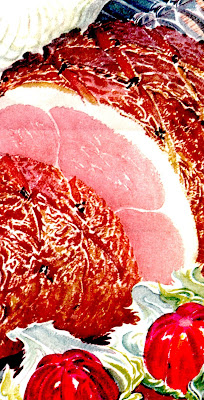 Cure for what ails you
One can't talk pig without hamming it up. Not
only the easiest of dinners to prepare, there is
little I adore more than HAM. Every once in
awhile we take a ride out of town to "Eddie's
Corner." A gas station, truck stop, bar, casino,
and restaurant about a half hour away. I always
order a ham steak dinner. The highlight being
a grilled circle of pineapple perched on its top.
Call me old fashioned but once I cut into said
slab I'm in pig heaven. Hence it's no surprise
that I also enjoy an occasional ham sandwich
on buttered toast. Sometimes the most simple
things in life are the best. I ham what I ham. 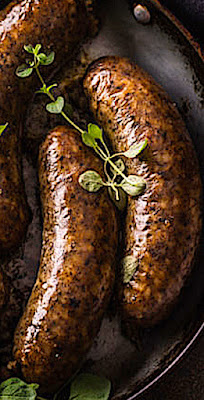 Case history
A few weeks ago my sister-in-law served some
pickled pigs feet during cocktails. Which were
frankly DELICIOUS. Somehow we've become
more than wasteful. Throwing away some of
the tastiest bits and pieces rather than eat to our
heart's delight. Ever eaten head cheese? If not
you should try it. Last summer Frank's uncle
"T" helped our nephew "J" make Jaternice, an
old fashioned Bohemian sausage. Pronounced
it-her-nit-za it's a mix of all of the parts of the
pig nobody wants to mention plus barley and
spices. Baked to crispy perfection, you literally
dine on history. An almost lost culinary delight. 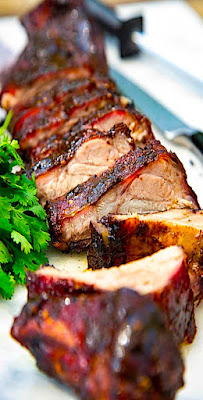 What's your rub?
And finally could there be anything better than
ribs? The best we ever ate were at a dive in old
San Juan Puerto Rico. In the years since Frank
has perfected a recipe which closely replicates
said divine dish. Rather than slathered in sauce
he rubs them with a secret mixture of herbs and
spices. Then slow roasts them for hours in a low
oven. The result is the tenderest of meat which
literally falls off the bone. Rather than hog more
of your time  I'll end with a suggestion. Isn't it
time to reconsider the "other white meat." Why
not make a pig for yourself tonight. Chances are
you'll squeal with delight! Here piggy piggy...