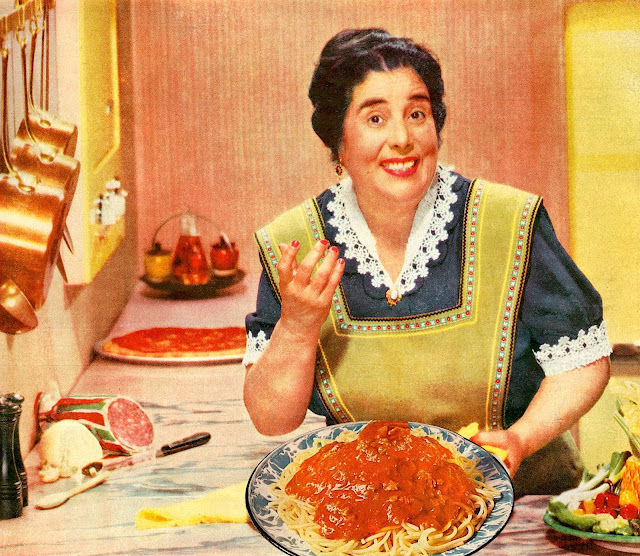 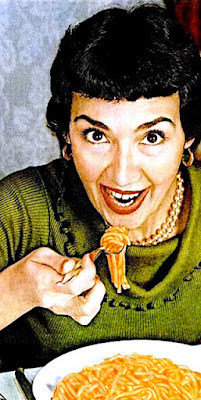 Mamma mia
No matter where one hails from, everybody
has a dish that reminds them of home. Yet
there are culinary delights that transcend all
cultural, ethnic, and social barriers. I was
raised in the classic WASP household. One
where everything was either roasted, boiled,
or broiled beyond recognition. Whereas my
dear Frank grew up surrounded by traditions
carried over from the old country. While his
father was Czech, his mom was Italian. And
as my children will attest - it really doesn't
matter where your Dad comes from. If your
Mom's family is from Italy you're "Italian!" 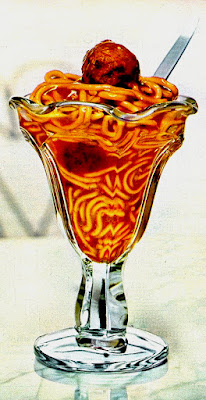 Basta
Lineage aside there is one dish that transcends
cultural bias when it comes to baby boomers.
Spaghetti and meatballs may hail from sunny
Italy however it's just about as all American
as one can get. Depending on where you grew
up it manifested itself in a many incarnations.
From the pedantic canned version from Chef
Boyardee. To elbow macaroni mixed with a
touch of tomato and chopped meat. To dry
pasta boiled beyond recognition smothered
in red "gravy." Thus it's no wonder that while
many of my generation loved eating "sketti,"
others could barely swallow said squiggles. 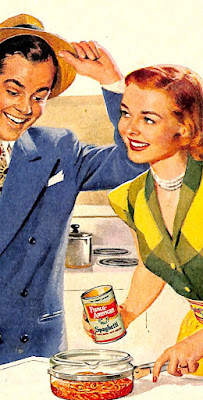 Merda
My mother wasn't the best of cooks. Hence
for much of my youth I dined on spaghetti
smothered in tepid off the shelf "Ragu" and
a dash of Kraft grated parmesan. Mother's
most heinous of culinary crime was a recipe
where broken dry spaghetti was mixed into
a stew of tomato juice, sugar, and spices.
All then blasted in a pressure cooker.  The
end result akin to swollen logs floating in
a sea of tomato goop. Finally quite late in
life Mom found a recipe for "spaghetti pie."
A mix of pre-cooked pasta, canned sauce,
and cottage cheese, baked in a pie dish. 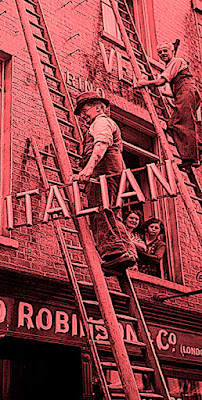 Mangia
It wasn't until college that I started to venture
down to Little Italy. There I confirmed that
whatever I'd eaten prior was anything except
authentic Italian cookery. Shortly thereafter
I met my first wife whose Mother's family
came from Sicily. Soon I was eating magical
things. However what was most amazing was
how delicious it ALL was. Her Grandma G's
spaghetti with meatballs was a culinary tour
de force. A taste memory that I dream of to
this day. And for many years at every family
gathering I ate, and ate, and ate. Much to my
heart's content. And to my waistline's folly...

Bellisimo
Over the years I've grown to love all aspects of
Italian cuisine. Along with being quite fortunate
to share my life with another Italian descendant.
Hence not a week passes that we don't dine on
pasta. However rarely do I prepare a classic red
sauce. Especially given there are so many other
ways to satisfy one's appetite. Yet once in a blue
moon Frank makes a special request. Yesterday
he did just that. And so we dined on spaghetti
and meatballs. My homemade sauce was made
from frozen tomatoes from our garden. The
meatballs crafted from local grass fed organic
beef. The end result being anything but retro. 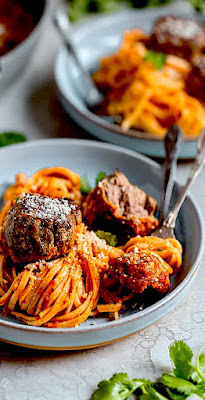 Sii Italiano
They say you can't go home. Yet sitting down
to a plate of steaming spaghetti takes me to a
special place. One thing is certain. I'll never
top Frank's Mom's sauce. What makes it so
special is a "secret" from her family's Lake
Como past - a pinch of allspice. Whatever
one adds to their sauce there is another secret
to being Italian. Which is sharing your heart,
home, and table with family and friends on
a regular basis. That's the ultimate recipe for
success. So rather than order out - why don't
you gather the troops for some spaghetti and
meat balls? Tonight's the night to be Italian!