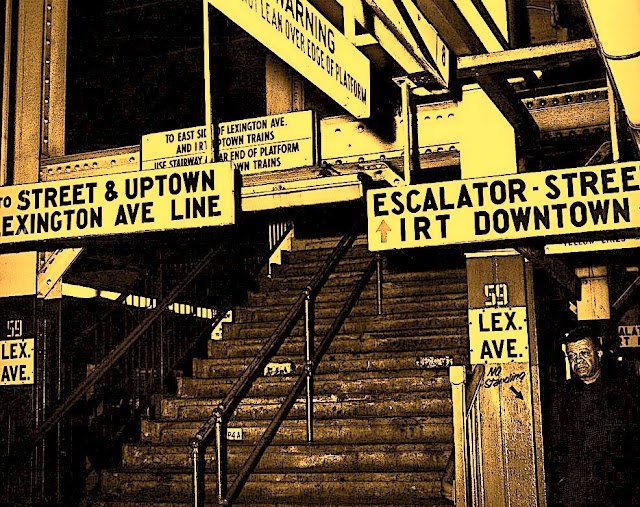 Walk this way
The say the closer one is... the farther they are.
That most certainly applies to me. At least as
relates to my daily commute. After decades of
driving miles to/from the office I once again
live within walking distance. Exactly twenty
three blocks or one point one miles to be clear.
Now that spring is in full swing with frequent
bursts of summer like temperatures, theres no
excuse for not walking. However each dawn
I seem to be unable to get my act together. At
least in time to dedicate twenty to twenty five
minutes to strutting my stuff. Thus sadly, most
mornings I take the subway rather than walk. 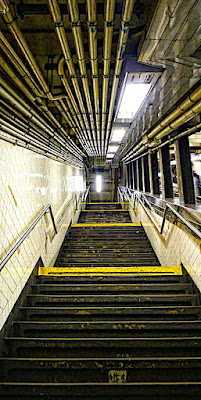 Stair master
Honestly, my side track far below is all about
time and NOT being lazy. Taking the subway
on a daily basis is a workout in and of itself.
However climbing up and down three to four
stories to catch a ride is like scaling Mount
Everest. Add the discomfort of pushing my
huge ego onto a packed train, hanging on a
bar for twenty blocks, and fighting one's way
off. No wonder this fat guy often arrives at
the office a sodden mess. While breaking a
sweat is certain to burn a few calories - being
stuck down under in suspended animation
due to a delay is certain to drive you NUTS.

Between stations
Don't get me wrong. I love the subway. Many
of my fondest childhood memories involve
riding the rails with my Dad. Back then the
trains were not air conditioned. During the
summer we roared up and down this island
with the windows wide open. Meaning your
journey was accompanied by the screeches
of the wheels straining to make a turn or stop.
I miss the heady damp scent that blew in the
windows as we raced far uptown to visit my
grandmother. And the thrill of straddling the
gap when moving between car to car at forty
mph. All for the token fee of twenty cents. 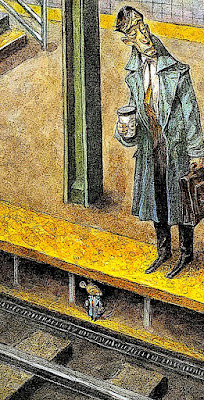 Rat race
While it may be dirty, damp, and dark - there
is no faster way to get from here to there in
Manhattan. Hence for most true New Yorkers
riding the rails is the only way to travel. In my
youth it was considered somewhat dangerous
to venture on said dark side. Taking the train
was akin to appearing in a scene from Blade
Runner. Add the occasional rat sighting and
you always got a thrill. Today it's become all
too genteel. The platforms are fairly clean as
are the trains sans any sign of graffiti. Hence
for most New Yorkers, the subway is still one
of the few things you can actually rely on. 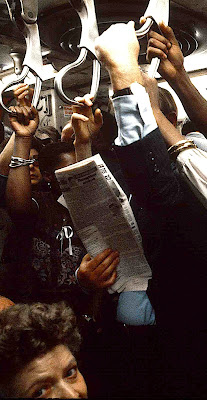 Hangers on
The best part of taking the subway are one's
fellow travelers. There are established rules
to said road. The most important being that
one avoids eye contact whenever possible.
That once required that one read a newspaper.
But today most passengers pass their journey
by looking at their mobile phone or tablet.
In essence they travel in self imposed exile.
Music seems to soothe these savage beasts
given most are enjoying whatever is flowing
through their earbuds. Once in awhile one
will burst into song then suddenly realize
there is no karaoke bar car on the A train. 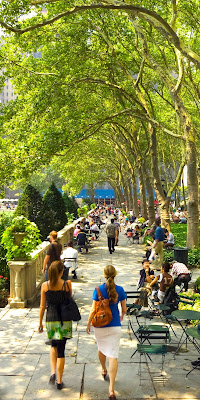 Half and half
At the end of the day I try to walk rather than
ride. At times I question whether that's in my
best interest. Post quitting time the sidewalks
are packed with commuters racing to catch a
bus or train to the burbs. Add the tourists who
have no problem stopping dead in their tracks.
Making strolling up Sixth Avenue something
akin to traversing an obstacle course. That's
why most evenings I stop and sit beneath the
sycamores in Bryant Park. What better way
to end one's day than escaping reality? No
wonder that by the time I finally get home I'm
half way to finally reaching my happy spot...
Posted by montanaroue at 4:00 AM