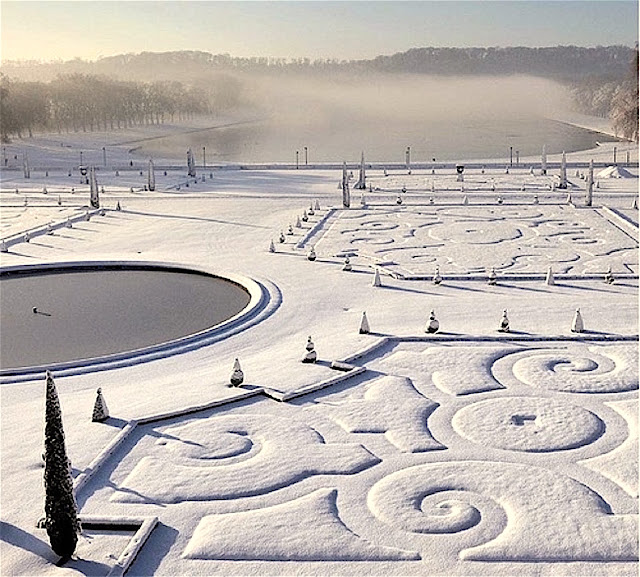 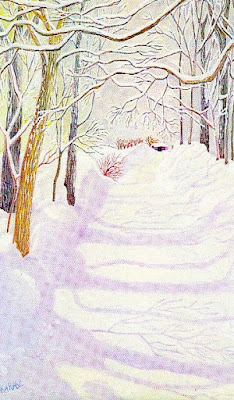 Everything's all white...
While white supremacy seems to be on the
increase in the White House, my thoughts
today are on things much purer than that.
Yesterday morning we awoke to a dusting
of the white stuff. For many such proof that
winter is upon us can be quite disconcerting.
However I prefer to look on the bright side.
The pure beauty of the freshly fallen snow
almost always takes me to a better place.
Especially when I'm on the inside looking
out. Somehow little else brightens one's
world more than a lack of pigment. Thus
today's blog is a purely a total white out. 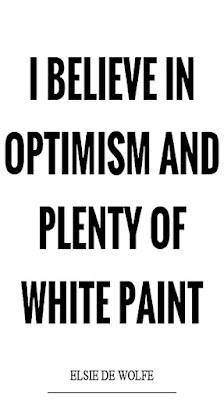 Pale by comparison
Elsie DeWolfe, the ultimate decorating diva
decided long ago that white was usually the
best option. She led a interior revolution that
rejected a dark and dismal Edwardian world
for a brighter future. While many consider
painting any wood a sin, one can't deny that
a swath of the white stuff instantly transforms
one's outlook. Hence there lies the reason that
the majority of French bergeres are painted
white, ivory, or the palest shade of grey. All
create the ultimate neutral zone. And so for
years many have played it safe by living in
white boxes whether in reality boring or not. 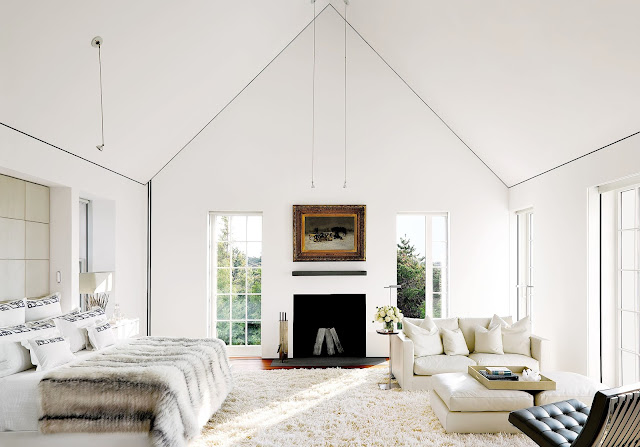 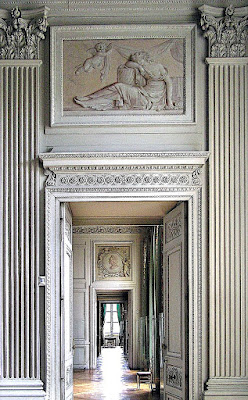 Like a virgin
I consider the pure intensity of white to
be the ultimate strategic weapon. Hence
it must be used wisely. Good intentions
aside, theres nothing duller than a dingy
white box. The most successful of white
interiors either use the lack of color for
punctuation or go all the way by creating
a hue less enclave. Either option requires
bravery and commitment. However going
the great white way doesn't mean one has
to limit their choices. From glacial white
to calming ivory one can color their world
with no color. It's yours for the painting. 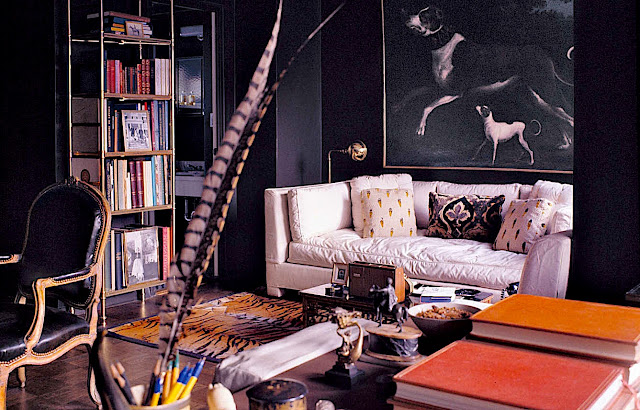 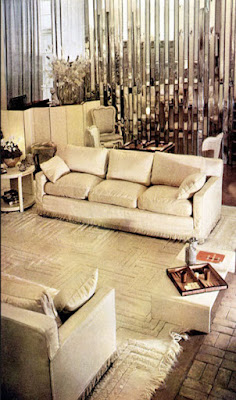 Opposites attract
Syrie Maugham is credited with creating
the first all white room. As shown to the
right, she integrated a range of whites to
create the ultimate neutral zone. Living
in an all white world ain't easy. Years ago
we purchased a lakefront Chicago condo.
It's floor was a sea of wall to wall white.
Once the owner moved out - evidence of
prior crimes were revealed. So we ripped
up the stuff to reveal a dark chestnut floor.
Said firm foundation offered the perfect
contrast to our white furniture. Proof that
opposites do attract. Yin & yang BANG! 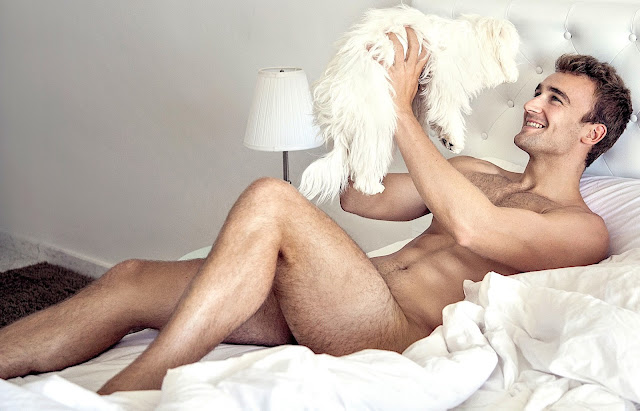 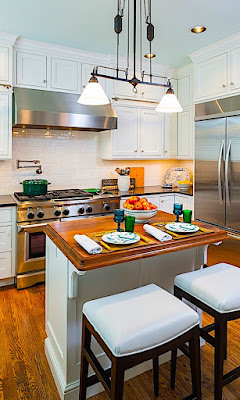 The white house
If who've visited our home you know we
love color. However it's balanced by lots
of the white stuff. For kitchens my vote is
always white. Once considered "sanitary,"
it's bright, cheerful, and easy to clean. At
one time I had a luxe black bathroom which
only looked good if nobody used it. Hence
white is in my opinion the only option for
bathrooms - even the towels! It's simple,
crisp, and thus oddly calming. And when
it comes to hitting the sheets, once again
my first choice is white. Perfectly pressed
high thread count cotton of course! 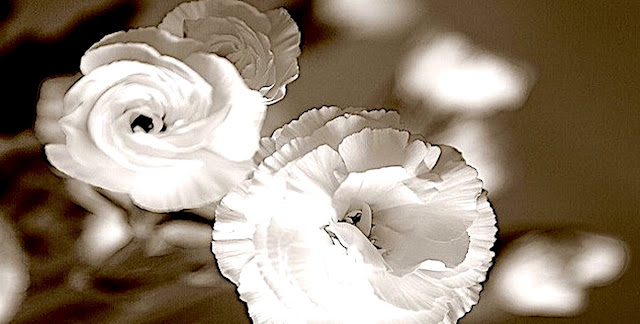 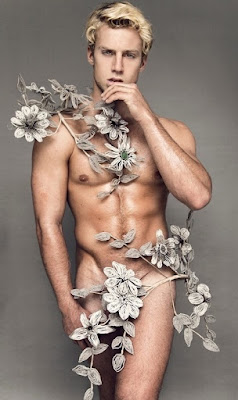 Flower power
While the way to many men's hearts is
through their stomachs, my weakness
is of the floral nature. Nothing makes
me happier than an all white bouquet.
Such a mix of elegant abundance not
only touches my heart - it transforms
any room. As many of  you know, my
flower of choice are miniature white
carnations. While most definitely not
deemed fashionable, their peppery scent
delights. Plus they last forever as do pure
white potted orchids. And much like my
man they're easy to maintain classics! 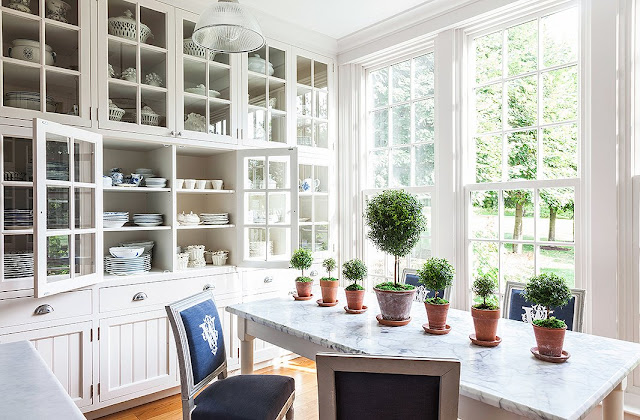 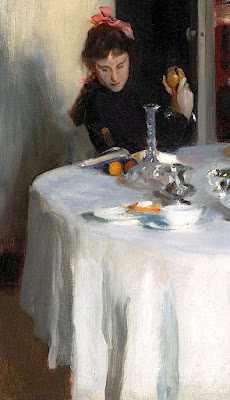 Tabula rasa
Last night I set an all white table for supper.
Upon an antique damask tablecloth I placed
my favorite china - Wedgwood's Nantucket
Basket. Next I added a mix of old pressed
glass goblets. Then in the center I placed a
clear handblown hurricane with one of my
grandmother's Heisey Old Williamsburg
candlesticks in the middle with a pure white
candle. Finally I added some a melange of
everyday silver and pewter. While nothing
could be easier, white was right. Thus my
advice is that whenever you're confused as
to how to go - DO THE WHITE THING!
Posted by montanaroue at 4:00 AM