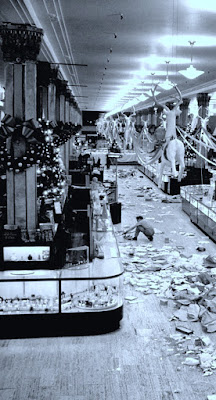 It is finished...
There is nothing more disillusioning than the
morning after. The weeks and months leading
up to the holidays works us all into a frenzy.
We fret and fuss until most of us lose all sense
of reality. Then finally the big day arrives. All
of our hard work is unwrapped or devoured.
And suddenly one is left with nothing else but
a big mess and... time on your hands. Plans for
New Years Eve aside, most of us really don't
have much to do this week but clean up after
ourselves. For some that can be depressing.
However I prefer to view the season's end as
"mission accomplished." What's done is done. 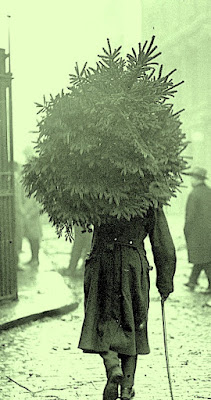 Over and out
Are you one of those people who keep their
trees up until after Easter? I prefer to keep
the season short and sweet. Which means
this Scrooge can't wait to take down all of
the finery and get back to normal. In order
for something to be special it needs to be
just that. Hence living year round amidst
twinkle lights takes away all of their magic.
Given we just put our tree up the eight days
ago, Frank's resisting my suggestion to yell
"TIMBER!" Instead he's forcing me to wait
until New Years to finish off our fir. It's only
two weeks so why not enjoy it while it lasts? 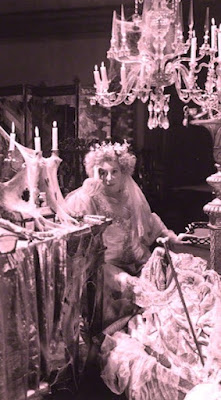 Delayed reaction
Thus my challenge. All I want is to get on
with things. Yet for a plethora of perfectly
viable reasons I must live much like Miss
Havisham amidst the crumbling debris of
Christmas past. Even natural greenery has
a must use by date. At this point it's more
fire hazard than decorative accessory. For
those organized enough to have started their
paper whites early, they're now in a rather
frenzied death throe. The trash can is ready
to go as it's full of forlorn boxes, tattered
gift wrap, wine bottles, and the remains of
the day. So why can't we just move along? 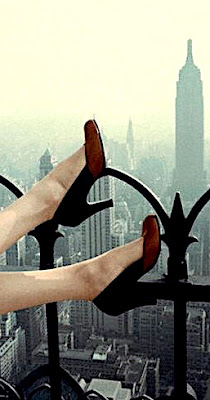 Alternative route
Don't you hate indecision? Is "transition" a
word that frankly irritates? I've never been
very good at doing the limbo. Anything that
requires one lower themselves is suspect at
best. Hence at least this man finds the idea of
being forced to defer his desire for seasonal
suppression bothersome. However if one is
introspective, one might query themselves as
to why the rush? And therein lies the answer.
You see by mid January I must shift to living
full time in Manhattan which while exciting
is also sad. Thus as with a bandaid, now it's
time rip it off and to cut to the chase. 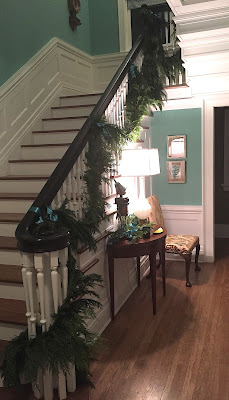 Moving violation
Much like those who prefer the holidays
never end, I've really no desire to quickly
exit central Montana. Rationally I know
that absence will make my heart grow all
the fonder. Yet looking at the mountains
and the beauty of this place, a voice deep
within cries out in protest. We all must do
things in life that make us uncomfortable.
Starting a new job is never easy. With a new
opportunity comes a tsunami of emotions.
Yet ultimately one settles in and gets to the
work at hand. Which is exactly what must
be driving my desire to get on with "next." 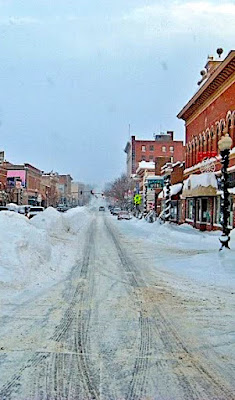 Ulterior motive
One thing is certain. I know that whatever
happens, Lewistown Montana will always
be home. Much like Mecca - I may only
return on key holidays for the next several
years. However ultimately, after my job is
done I'll return back to home base like the
prodigal son I truly am. Given sans pain
there is rarely anything to gain, I've little
doubt I'll be better for my time away. Yet
as of now the very idea of not being here
on a daily basis is oppressive. All of which
explains my desire to end this tenuous time
of "before" and get going on to "after." 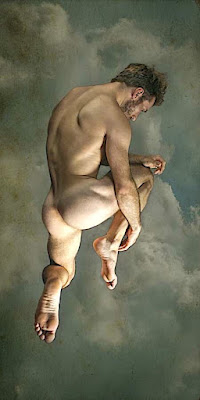 Leap of fate
Every new year most of us feebly attempt to
implement aspirational resolutions. Invariably
the majority of which involve righting wrongs
or forcing one to implement new initiatives.
However try as we might few of us achieve
anything on said list. That's because if given
the option, most opt out. So when was the
last time you actually tried something new?
Pushed yourself to new places? Nobody can
change your life but yourself. Hence it's best
to do something... anything. The best is yet
to come so what are you waiting for? Dream
a little dream and SIEZE THE MOMENT!
Posted by montanaroue at 4:00 AM