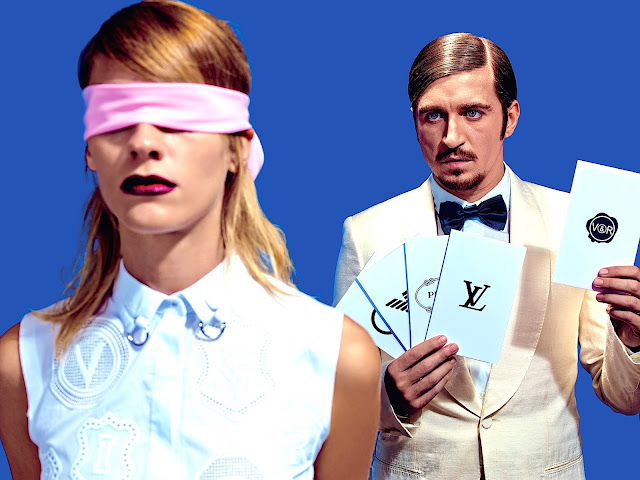 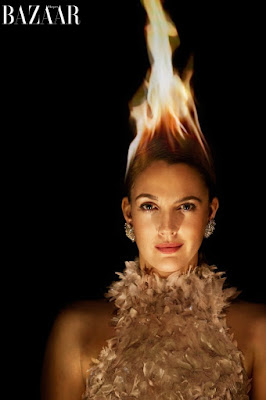 You're getting warmer...
Last night I flipped through Bazaar's
massive March issue. Upon the cover
was Drew Barrymore sporting flames
and the announcement that said rag is
now deemed "hottest". I was excited
as I worked my way through it's pages.
Not necessarily because of the fashion
shown therein. But rather at the idea
that being fashionable could suddenly
be fashionable once more. Could our
aesthetic salvation be looming on the
horizon? Have the masses embraced
the fact that appearances matter? 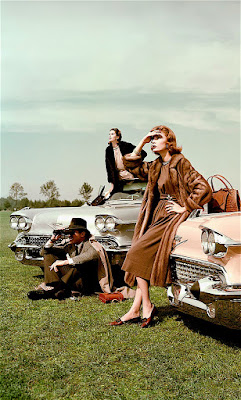 Missing link
For the past few years I've bemoaned our
sorry stylistic state. For whatever reason
there's been nothing of any consequence
out of Paris, Milan, London, Tokyo, or
New York for eons. It has been apparent
that most millennials reject the concept
of any trendsetter telling them how to
dress. Thus fashion has evolved into a
mish mash of modes. In such a free for
all world anyone can don whatever they
choose. And thus sadly, that has led to
the evaporation of élan. Glamor being
replaced by yoga pants and hoodies. 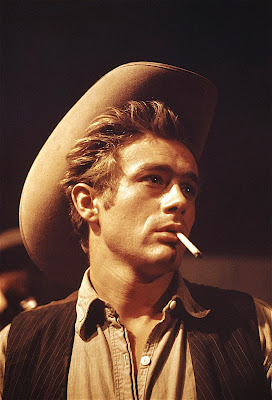 Vested interest
Recently a young relation rode through
town. He's a good looking, smart, and
successful fellow. However that's not
what's most attractive given he is also
a kind and hence admirable soul. We
discussed his upcoming nuptials. And
of course... I had to ask him what he
was wearing. Post "discussion" with
his future spouse and beloved mater,
he reluctantly agreed to don some
jeans, a white shirt, and vest. All due
to his desire to feel "comfortable" as
he ties the knot. 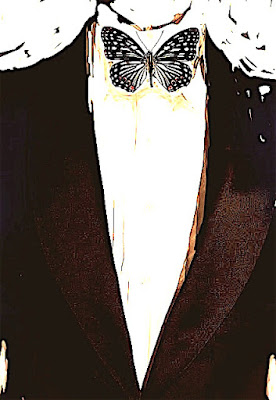 Out of context
One can't help but admire such overt
self confidence. Yet I can't help but
wonder if said young man is missing
out. There is nothing like wearing a
perfectly tailored garment. After all,
fashion can be quite transformative.
What man doesn't look amazing in
a tuxedo?  Invariably when wearing
one's best, an ordinary day becomes
a life changing event. However why
do most young males prefer to look
and act like boys rather than behave
and dress like gentlemen? 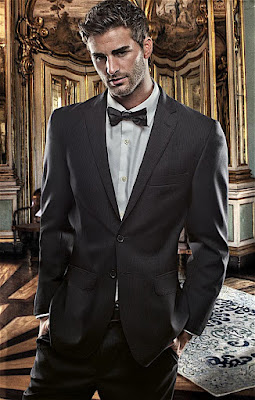 Altered egos
Last Saturday night at our local Paint
The Town Red Gala most gentlemen
took their ensembles up a notch or so.
Greeting our guests I was dazzled by
their collective change in outlook.
Their tony togs obviously lent them
some added swagger. Looking good
made them feel good. And judging
from the looks in their lady's eyes,
I'm certain their evenings ended with
a bang. More than worth the time and
effort it took to strut their stuff. Do
you think they learned their lesson? 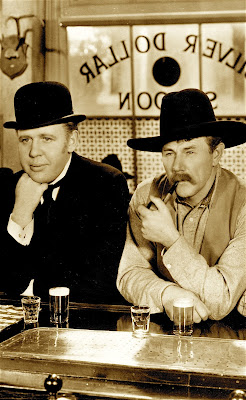 Neither here nor there
Theres a time and a place for everything.
And while I'm fully aware that New York
finery will never flourish here in central
Montana, can't there be a happy medium?
Some seem to feel no need to follow the
rules. However if for no other reason,
proper grooming and attire indicates a
level of respect for oneself and others.
Which bodes the question - is a lack of
sartorial splendor driven by arrogance,
ignorance, or just plain laziness? Why
are so few obviously willing to do what
it takes to look (and act) their best? 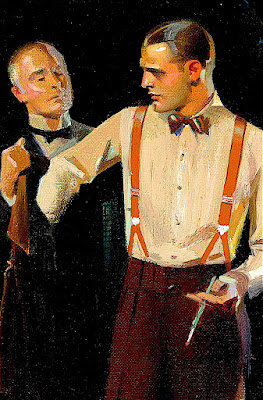 Sense and sensibility
Everybody puts their pants on one
leg at a time. And fortunately, most
of us bathe daily. Hence in essence
we're all the same. The difference
is what we choose to wear and how
we appear to others. Theres little as
mundane as parody. Yet one has only
to stroll our malls or airports to see
a sea of sameness. Are our lives so
boring that taking the time to stand
out from said crowd has become an
unnecessary evil? Given perception
is reality, have we no sense of pride?
Posted by montanaroue at 4:00 AM