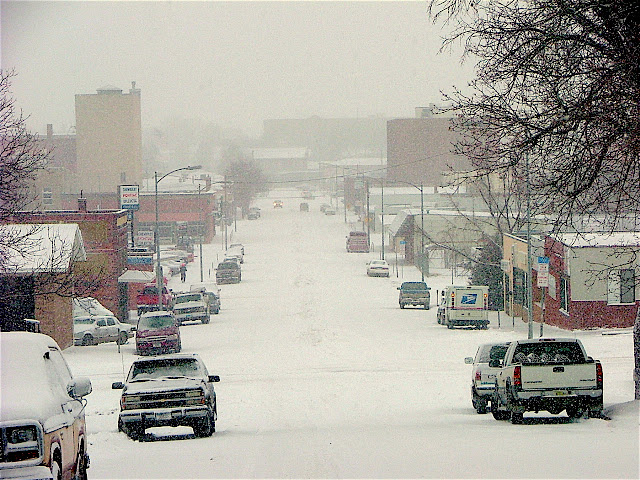 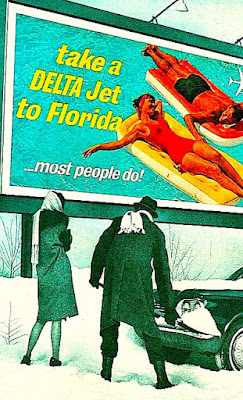 Suddenly Siberia
Just this past Tuesday I stood on Main
Street in the balmy mid fifty sunshine.
Several of us delusional folks chatted
about how unseasonably warm autumn
had been thus far. Suddenly one friend
said "Stop, don't jinx it."And given that
by the next morning we had almost up
to four inches of the white stuff... it
was obvious that fate had been tempted.
While we'd already had a few dustings,
those flurries were gone in a hurry. Yet
as it's snowed several times this week...
winter has arrived in Central Montana! 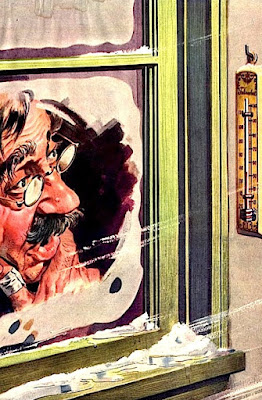 Down and out
Taken by surprise, Central Montana is
in rather in a state of shock. Hence one
sees folks wandering about in what can
only be deemed seasonally inappropriate
attire. Let's face it, a sweater and shorts
aren't enough. Yet it's no wonder given
it was sixty a week ago. Now that our
low hits the teens, the thermometer may
make it up to a balmy thirty degrees.
Given such a seismic shift of climatic
fate, we all now need an atmospheric
attitude adjustment. Time to pull out
those boots, coats, hats, and gloves! 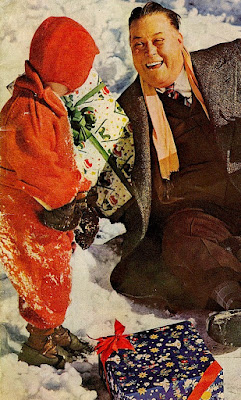 Seasonal disorders
Obviously some ancient decided to
acknowledge that this time of year
is rather depressing. Hence whether
one is pagan, Wicken, Orthodox, or
Episcopalian - there's some sort of
holiday diversion to take your mind
off the season's gloomy progression.
Soon the days will grow so short that
our time in the light will be minimal.
That's why I welcome the white stuff.
At least it maximizes what little glow
the sun provides. I guess it's Mother
Nature's version of the great white way! 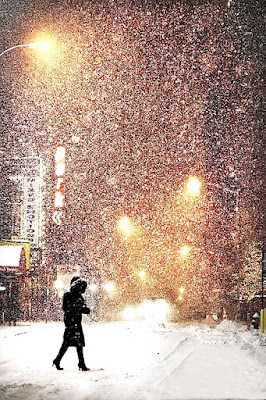 Eastern exposure
This first true storm was accompanied
by ice which for many Montanans is
reason enough to flee far south for the
winter. Simply navigating the parking
lot at Albertson's can be the equivalent
of conquering Mount Everest. But if
I ever start to complain, I simply stop
and remember those wintery days in
Manhattan. NOTHING is worse than
a bad winter storm in the city. Whether
it's slugging through calf deep slush,
or slip sliding one's way down into the
subway, it's BAD. So it could be worse! 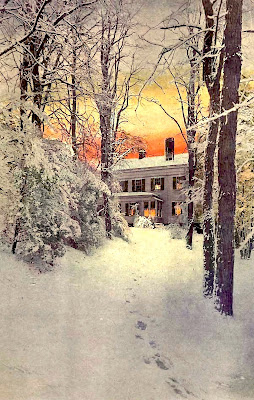 Improved outlook
At least when I look out of my window
I see the western equivalent of a winter
wonderland. Johnny Mathis' dulcitones
aside, my heart perks up at the sight of
every tree branch covered with a layer
of snow. And as long as one does not
have to weather said storm, it's quite a
beautiful sight. Which reminds one of
how blessed we are to live in this place
called Montana. So rather than groan
about shoveling, grin and be thankful
for what we've got. After all, it's that
time of year you know! Let it SNOW!
Posted by montanaroue at 4:00 AM