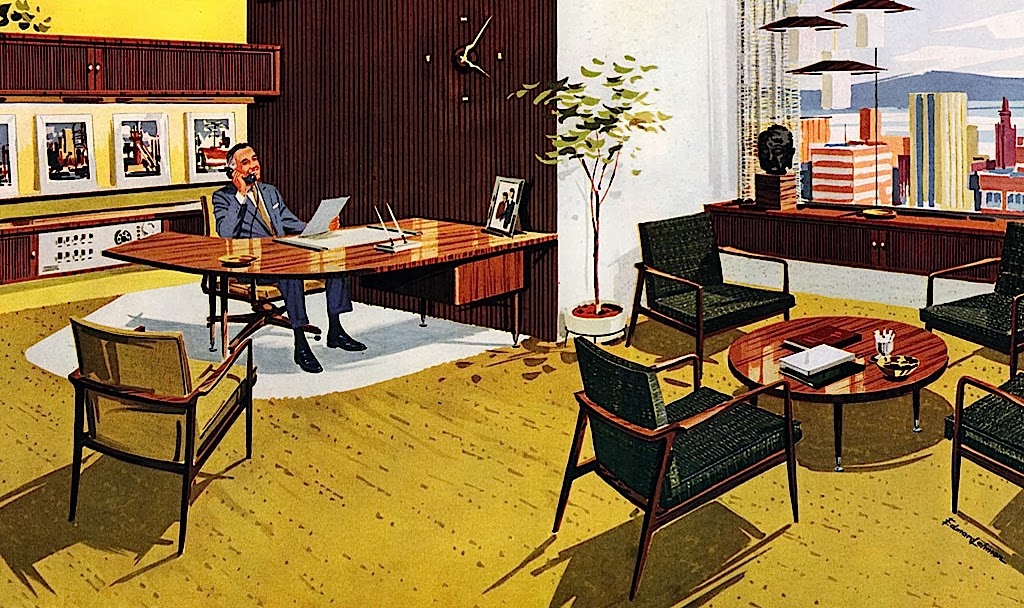 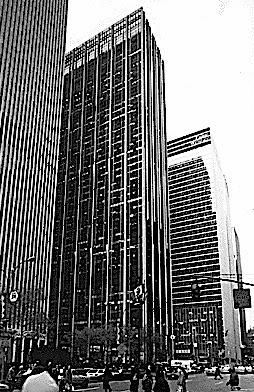 What the peck?
My first real job was in a hi-rise along
that iconic mid century stretch of Sixth
Avenue. In the days before open offices,
it was easy to tell how someone stacked
up based on their accoutrements. All of
the honchos sat in the corners. Big wigs
along the windows. As you went down
the food chain,  status was defined by
office size, door (or none), decor (wood
or Formica) or carpet (or linoleum).
Across the hall, the deeper one got to
the center of a floor, the lower you were
on the totem pole. Life was that simple. 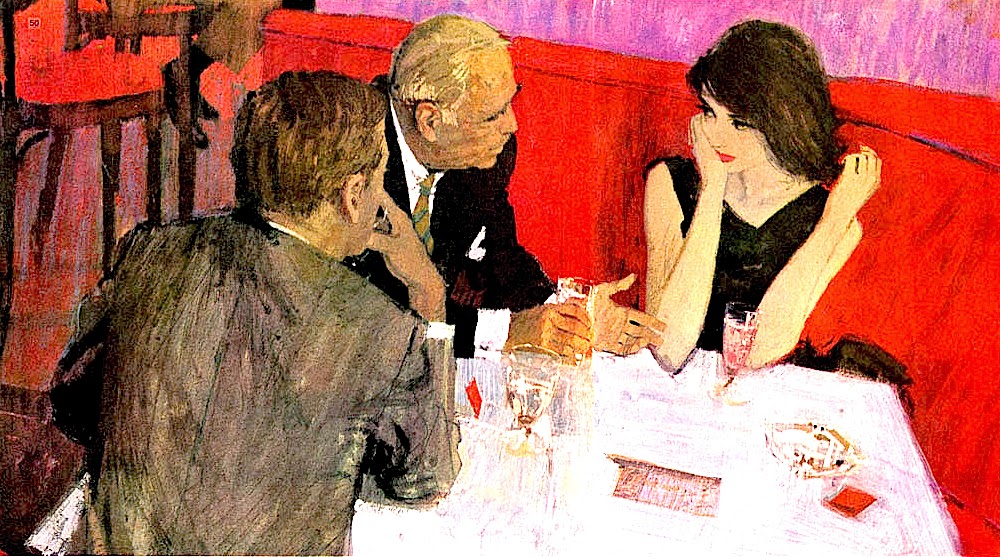 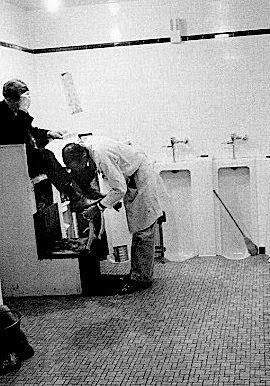 Us and them
In those days there actually was an
Executive Wash Room on most floors
for MEN ONLY. In addition, rather
than dine at their desks, those same
gentlemen retired to the Executive
Dining Room for lunch. There they
sat high above the masses with their
bosses, peers, and midday Martinis.
By the time I made it up the corporate
ladder most of these perks were long
gone. Made extinct by profit margins,
women's "lib" and modernity. Today
you're lucky if you get a cup of java! 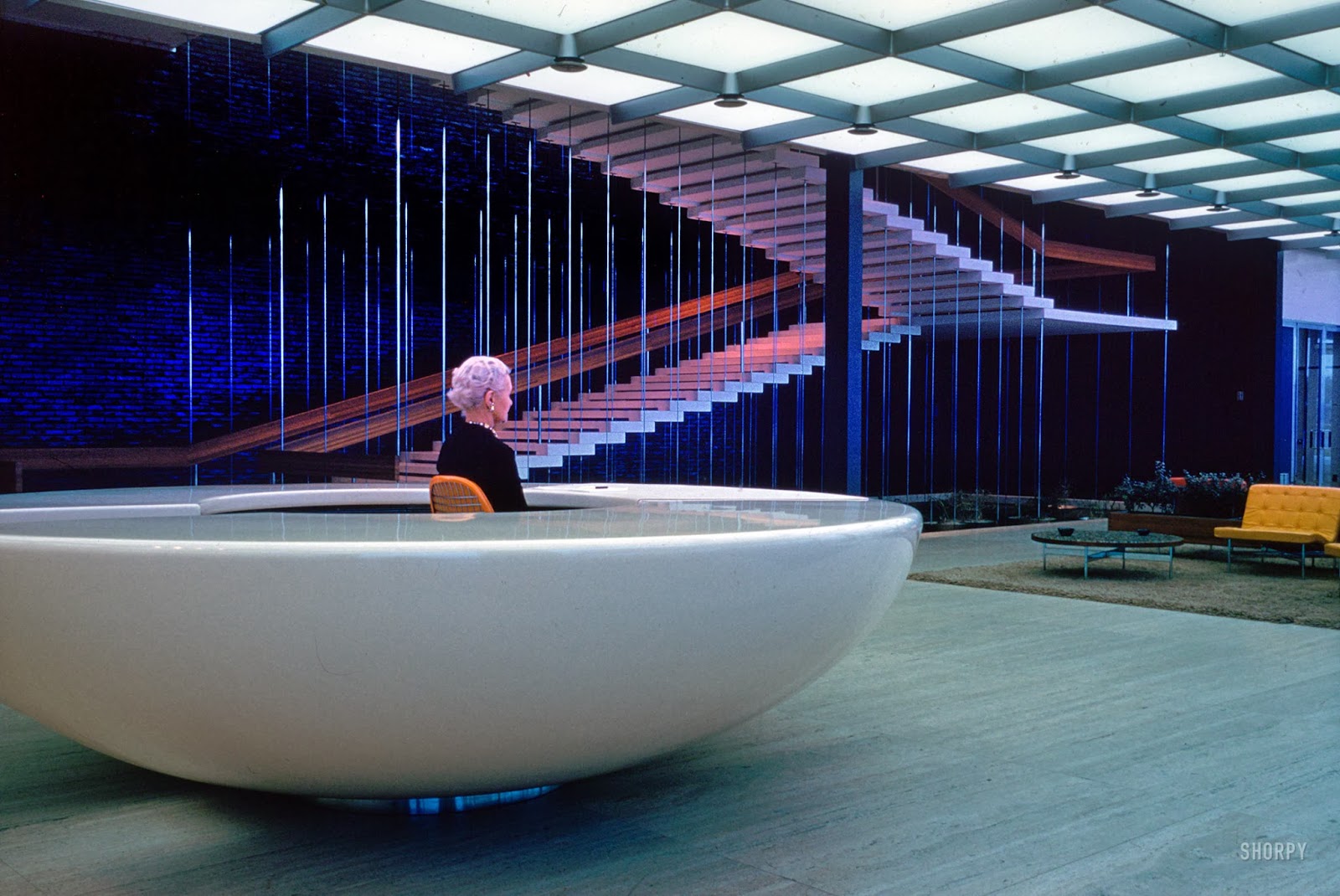 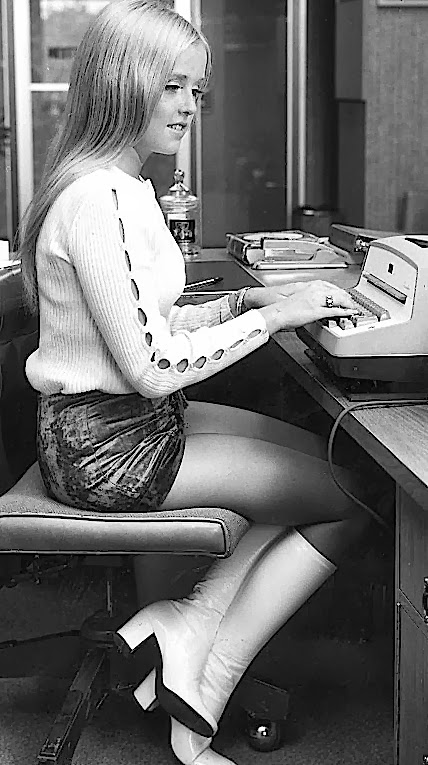 Rock, paper, scissors
The world where I started my professional
life considered an IBM Selectric typewriter
and White Out the latest in word processing
technology. In those days if you were copied
on a letter or memorandum, chances are you
probably received a carbon copy. That was
because photo copiers were few and very far
between. Often on separate floors located in
"copy centers". What's hard to believe is how
ponderous issuing any form of hand or type
written communication once was. How did
anybody get anything done without e-mail?
Actually the less said (or written) the better! 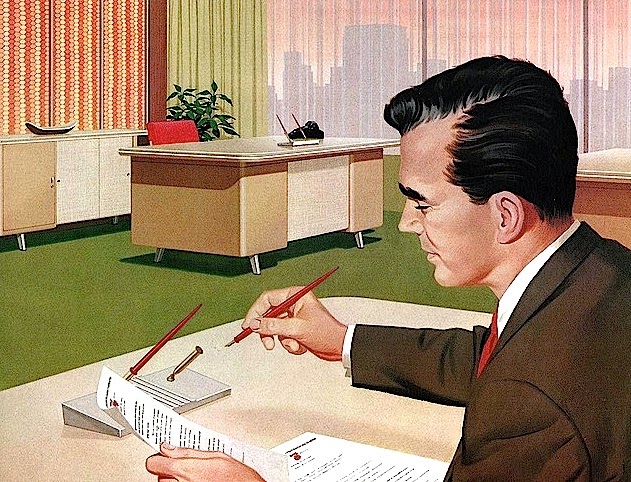 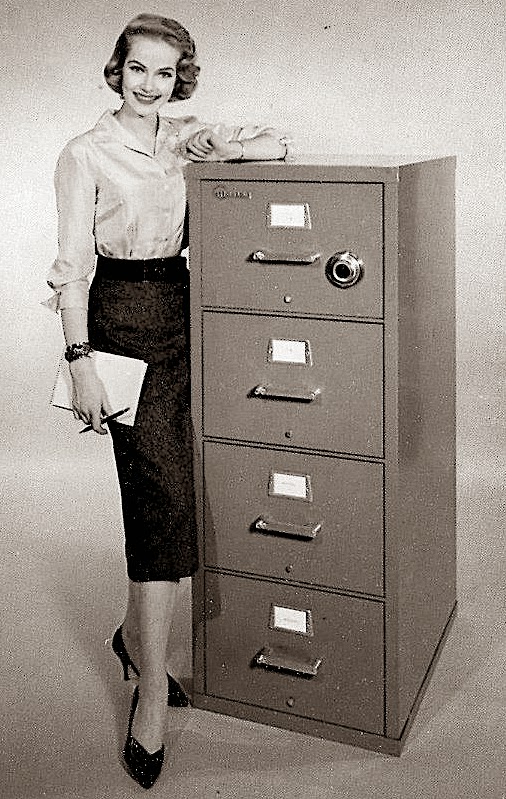 Stop, look, listen
When one actually put a pen to paper,
the process alone required thinking about
what you are about to communicate. You
would spend hours drafting or correcting
any missive issued personally or by your
staff. Unlike e-mails, memorandums were
reserved for important communications.
Not a substitution for conversation, they
were distillations of thought. Putting it
on paper made your message irrevocable.
Once one left a paper trail, your words
could come back to haunt you some day!
We used to think before we wrote. 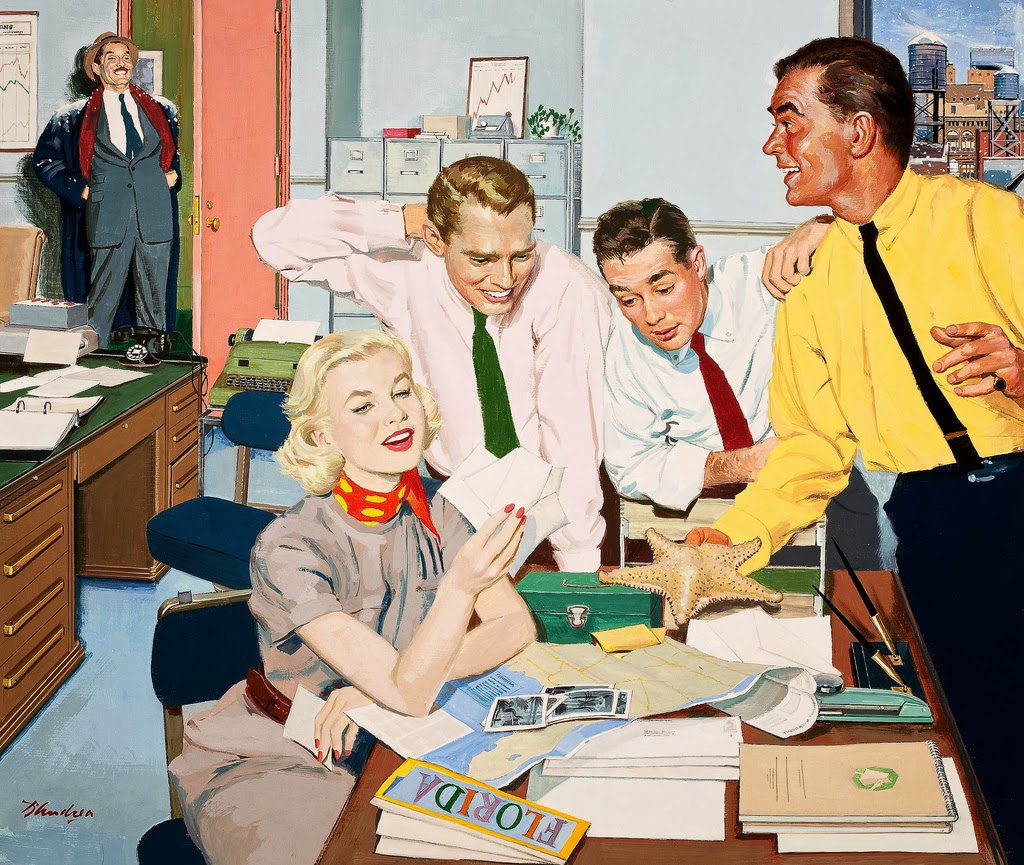 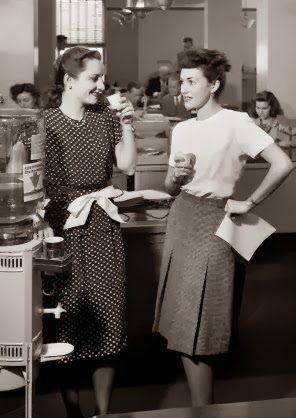 All the write stuff
Actually getting your point across
quickly wasn't that hard. If one had
something important to say, most of
us simply stepped down the hall, or
picked up the phone, or jotted down
a hand written note. Everything was
much more personal in those days
and yet in many other ways so much
more impersonal. While one shared
a sense of camaraderie with peers,
you certainly never called your boss
by HIS (yes his) first name. We had
a hierarchy that demanded respect 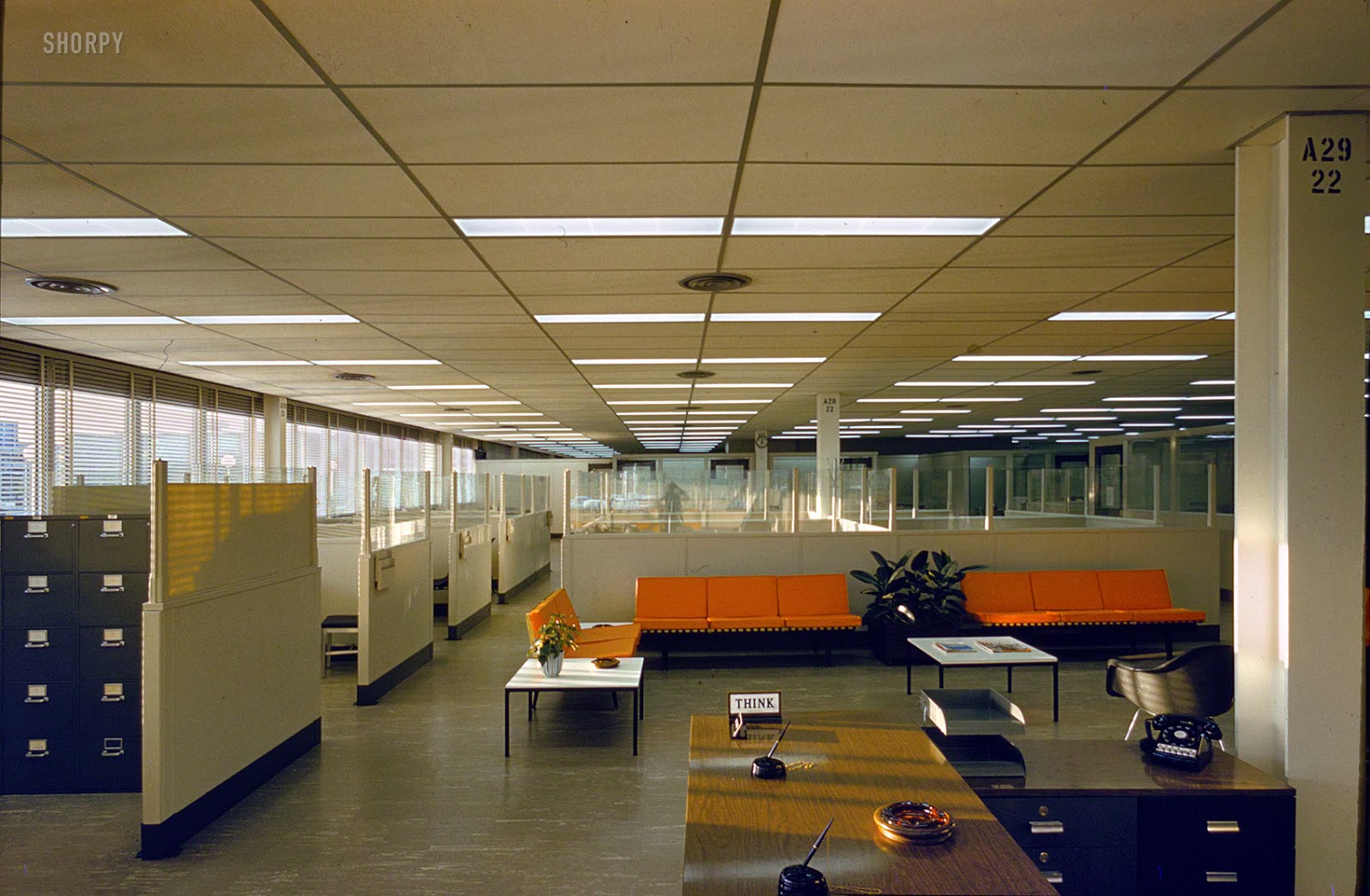 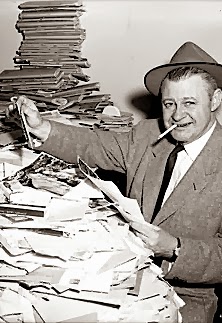 What goes around...
In reality the corporate world hasn't
changed that much. There still is a
hierarchy of perks that define who is
who. Honchos still sit in corner offices
or whatever equivalent that exists in
their new open spaces. While most of
us will never leave a paper trail, the
fact is any lawyer can subpoena our
computer and smart phone records.
This includes all e-mails, messages,
texts and virtually anything you sent.
The fact is it's much harder today to
NOT leave a record than ever before. 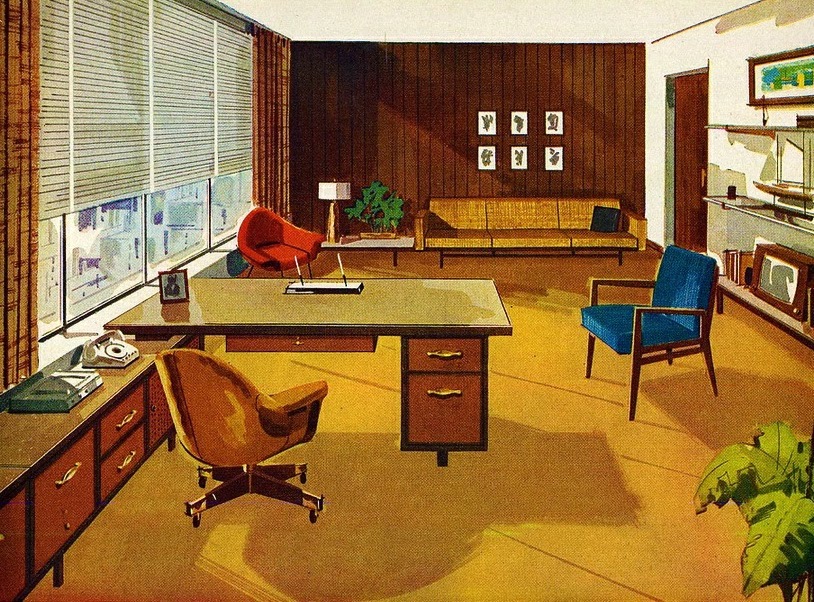 Church and state
The hardest part of this new world
is the simple task of relaxing. Few
if any can easily leave the office at
the office. Therefore maintaining
a work/life balance is much more
challenging than ever before. After
years of being consumed with work,
I've recently shifted my approach
and am doing my best to disconnect
my personal from professional life.
While that may seem old fashioned,
I think it will make me a better (and
happier) man in both worlds.