WHAT'S EATING AT YOU? 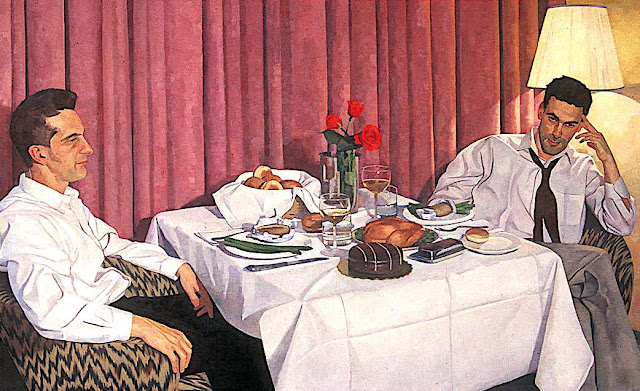 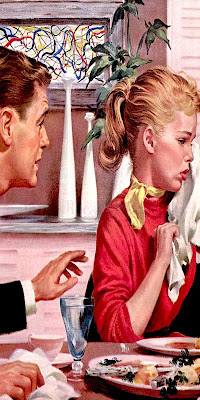 Off and running
Last night at dinner Frank accused me of being
out of sorts. "Something is bugging you." As
I denied any hidden agenda his rapid response
was "You're off." Which not only confused me,
but unnerved me. Was I exuding negativity?
Could I be unaware of some dark cloud that
was hovering above me? The fact is I'd had
a lovely day. Puttering around the house and
garden. Preparing and enjoying a "delicious"
(per Frank) pasta dinner. So what was wrong
with me? What undercurrent was pulling me
down subconsciously? Is it feasible that one
can be both happy and sad at the same time?

The other man
Knowing that Frank knows me all too well,
I spent the balance of last evening and this
morning pondering his theory of negativity.
While I ultimately have no one to blame but
myself, I've come to a conclusion. There is
another man in my life. One who moves me
in mysterious ways. Whose very words and
actions can send me spinning. Thus like it
or not, my very happiness is impacted by
external influences. So who is the culprit?
Donald Trump. Every time he does or says
something offensive, outrageous, or outright
wrong I go nuts. So in theory it's all his fault.

My root of all evil
Frankly I'm amazed that such an man could throw
me off my game. Yet if my better half is correct
Donald Trump's presidency has pushed me over
the edge. Limiting my ability to sit back and relax.
To literally smell those roses blooming in Frank's
walled garden. To enjoy everything that is good
in this world. Now post coming to said conclusion
I'm left with a quandary. What can I do to stop
Donald Trump's negative impact on me? Do I no
longer watch the news? Should I never read the
newspaper again? Log off the web permanently?
Upon self-reflection I've come to the conclusion
that none of the above matters. But my vote does.

Purple phase
Never before has each and every vote mattered
more. Even if  experts on the electoral college
disagree  You see, I live in one of those "red"
states. However if one reviews a heat map of
Montanan votes from prior elections it shows
clusters of blue plus quite a bit of purple here
and there. Hence while I found the very term
"anybody but her" offensive during the 2016,
election cycle, my hope is many red Montanans
will secretly vote their conscience in 2020. And
possibly... one by one... skew the odds over to
our collective favor. Insuring our next president
of these United States will be anybody but HIM. 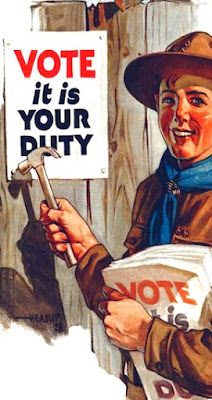 From bad to worse?
Like it or not, chances are that I will continue
to be in a foul mood for at least another year.
The cure for my angst isn't ignoring the real
problem. Rather it's doing something about
it. So here's the deal. Either all of my friends
who voted for Trump can convince me to do
the same. Or somehow I will be able to help
them come to their senses. Come November
third, 2020 we will all have to make a choice.
One which in my opinion has more to do with
morality than politics. Right or wrong, ready
or not, here it comes. So let's make sure that
we do what we have to do. C'mon get happy!
Posted by montanaroue at 4:00 AM