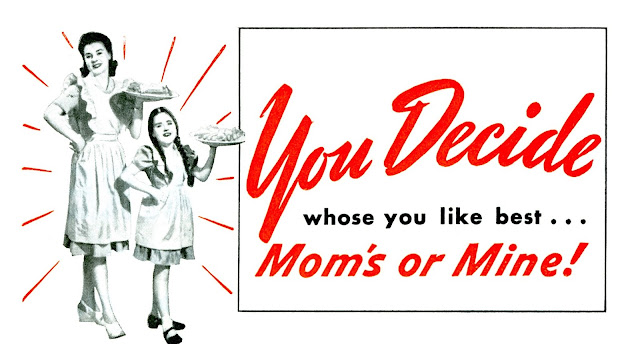 Simply awful
White Anglo Saxon Protestant cuisine is closely
akin to it's moniker. In that it's bland, mushy, and
horrifically boring. Growing up in a WASP home,
everything we consumed looked, felt, and tasted
the same. The highlight of any meal was it's end.
Dessert. My Mom's menu planning consisted of
a regular rotation of tried and oft failed favorites.
Hence every seven days we sat down to a roast
beef, roast chicken, broiled (burned) lamb or pork
chops, plus the occasional baked ham. All were
accompanied by mounds of mush that had once
been some variety of canned vegetable. That plus
baked or mashed potatoes or a random dumpling. 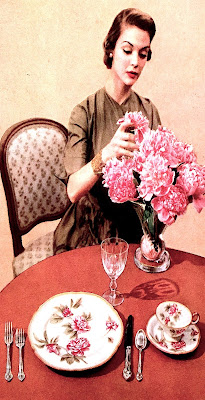 Show time
Once deemed old enough I was allowed to join
my parents each night in the dining room. An
elegant affair with china, fine linen, crystal,
flowers, and candlelight. Plus my mother all
dolled up in a lovely frock. To this day I have
warm memories of those evenings at our table.
Yet like any victim of abuse I can't remember
what we ate. In hindsight the evening meal's
pomp and circumstance had a motive. Which
was to distract us from the mediocre mess set
before us. Somehow I struggled through. Quite
glad once it was cleared away and I could ask
to be "excused" from the table.

Foreign intrigue
Like most Americans my Mother's culinary
pursuits evolved with the times.Therefore at
times she could get quite "exotic." However
what was dished out often had no relation to
the real thing. When it came to French food
it wasn't quite as risky. Ethel loved quiche.
So long before it was fashionable, we would
dish one out for Sunday supper. During the
summer ratatouille was another staple. Made
from fresh goodies picked at the farm stand
or from our garden. We occasionally went to
Spain via saffron rice or a starter course of
canned black bean soup (laced with sherry). 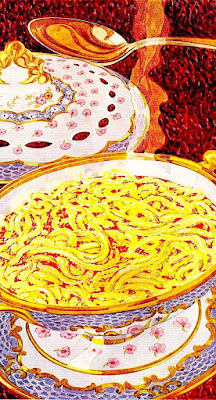 Boot camp
However  Italy was Mom's worst destination.
Her spaghetti recipe was canned tomato juice,
dry spaghetti, sugar, and a dash of some herbs
blasted in the pressure cooker. The end result
a gluey goo Ethel proudly claimed "tastes just
like Franco American!" Another specials was
"Spaghetti Pie." A mix pre-cooked spaghetti
and cottage cheese dumped into a pie plate.
Then smothered in jarred pasta sauce. Next
sprinkled with shredded mozzarella. Baked
in a hot oven until dry. No wonder to this day
I struggle with anything covered in classic
"red" sauce. I may have been scared for life! 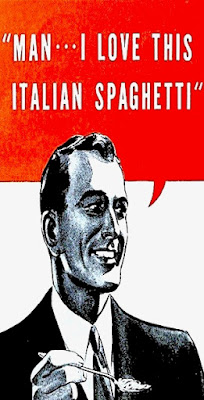 Italian stallion
Who knew that I'd marry two Italians?!
Both with mothers where were fabulous
cooks armed with an arsenal of beloved
family recipes. Nor that Rome would be
one of my favorite places on earth. In the
years since my dearly departed Mother's
attempts at Italian cookery, I've eaten the
most amazing things. Hand made pasta
coated in cream and covered with shaved
white truffles. Or Vitello Tonnato - paper
thin slices of veal smothered in a delicate
sauce made from canned tuna. Or Osso
Buco! My favorites list goes on and on! 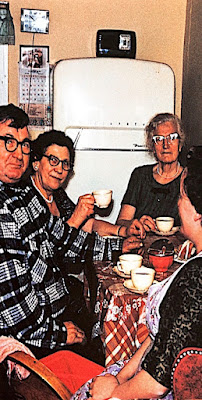 Together forever
We all evolve. Yet as we age, our past tends to
return with a vengeance. Which must be why
I've returned to my culinary heritage. Not a
week passes with at least one of our meals is
a blast from my past. From shepherd's pie,
to chicken pot pie, to pot roast, to a perfectly
roasted chicken. All which seem new again
and taste even better than I remember. In the
end I've discovered why they call it comfort
food. Once set upon the table, it's almost as
if my Mom and Dad have also joined us for
dinner. And for at least a few minutes we all
reunite around the dinner table once more.