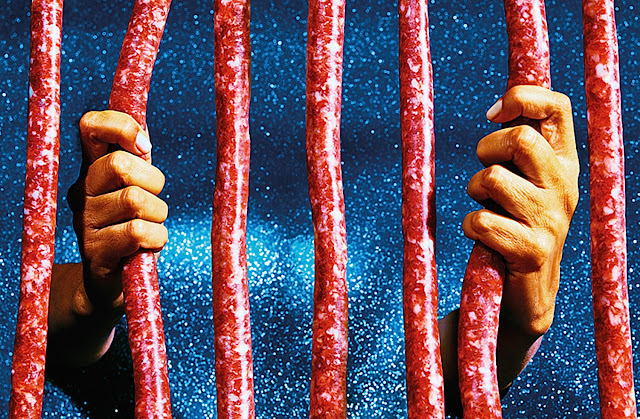 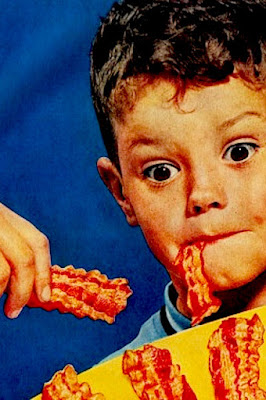 Fried and true?
At this point I'm fairly confident that
someone wants to eliminate all joy
from our lives. Over the years many
scientists have released studies that
in theory prove red processed meat
causes cancer. Which if nothing else
causes one to pause on the protein.
How could something that tastes so
good be so bad that it could kill us?!
If I had to eliminate bacon, sausage,
charcuterie, and all other red meats
from my diet - I couldn't survive. I
would rather die happy than healthy. 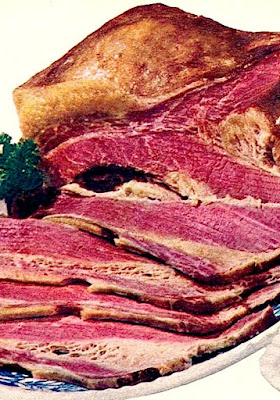 Enough already
Is anybody else as confused as I am?
Nowadays it seems that bacon is in
everything from chocolate truffles to
ice cream - so how can anybody have
the nerve to tell us we can't eat it?!
Given I've never met a sausage that
I didn't like, who has the balls to try
to build a case against proper protein?
Quite frankly I'm not enamored with
the idea of any missing links from my
breakfast fare. However the fact that
I shouldn't eat a pastrami or corned
beef on rye might possibly kill me. 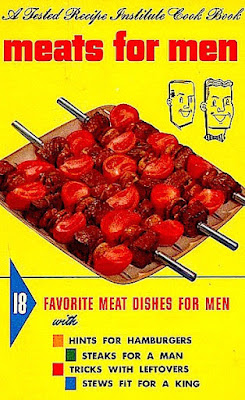 Raw deal
Since the dawn of time humans have been
carnivores. The difference between us and
the cavemen is that after they killed their
prey the ate it raw (until they discovered
fire). Hence my initial rebellion of all of
the anti meatists theories is to eat TONS
of steak tartare. It seems decadent in that
it's raw and red thus in theory quite bad.
Equally shocking is that the "other white
meat" - pork - can't pale by comparison
given it's deemed red by the meat police.
Confronted by an untenable situation my
only response is WHAT THE CLUCK?! 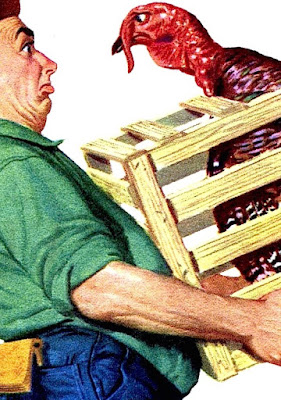 A wing and a prayer
I love poultry but unfortunately it
doesn't return my favor. Years ago
my allergist officially identified the
little cluckers as a no no. It wasn't
that they would kill me. However
the residual effect of consuming a
feathered friend results in a cloud
that just might kill Frank. Thus I
tend to avoid the hen house. Then
of course there's turkey. However
I find Tryptophan to be a bore. Is
it time to go hunting for a gaggle
of geese, pheasant, or grouse? 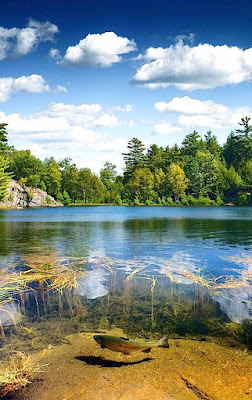 Off the hook?
We can't forget fish. However given
we're at least a thousand miles from
an ocean, getting fresh can be tough.
While in theory it's good for you -
there are still issues to worry about.
Too much tuna can lead to mercury
poisoning. And while farm to table
is a healthy approach, when it comes
to fish it's not the healthiest. Thus the
best choice is going wild which means
very limited choices here in the wild
west. Fortunately we live near world
class trout streams. HOOK ME UP! 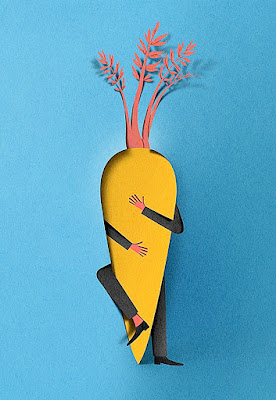 Off the hoof
Last but not least I could become a
vegetarian. Given the risks associated
with pesticides, genetically modified
organisms, and who knows what else,
chances are there's danger at the root
of everything! Could our greatest risk
be the danger of misinformation? Is
it possible that there can be too much
of a good thing especially when that
involves theoretical good intentions?
One can't help but wonder if it's even
possible to avoid eating badly. What
if we all starved to death instead?! 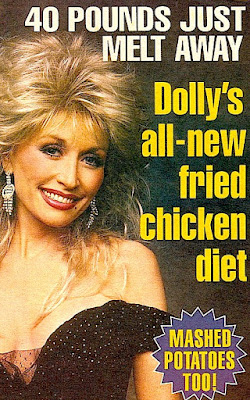 Till we meat again
In the end I've decided that it's better
to die happy, well fed, and "young".
During my tenure here on earth we've
been warned that everything was bad
for us at one time or another. The flip
flop of healthy eating is if nothing else
confusing. At some point something is
going to kill you. Whether it's coffee,
cholesterol, or a grilled chop - the odds
are against us. Hence I'm going to eat
whatever I want whenever I want to.
Hopefully someone will discover that
too much of a bad thing is good for you!
Posted by montanaroue at 4:00 AM