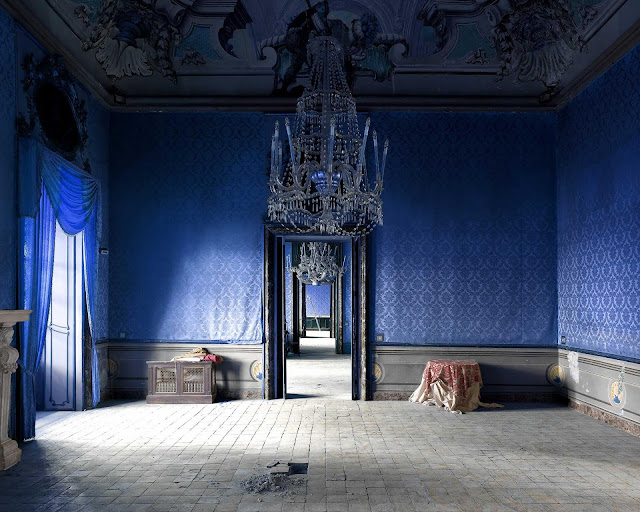 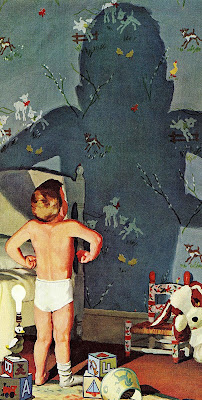 Big ideas
There is no doubt that I have been consumed
with interior decorating for most of my life.
As a boy my parents indulged my creative
impulses. Allowing me to use my bedroom
(and later an apartment) as my own decorative
laboratory. In hindsight what could have been
smarter in that such diversions kept me close
to home and hence theoretically out of trouble.
Since then I've put my stamp on wherever I've
lived. Often with little or no money to do so.
In hindsight I'm certain that much of my effort
was questionable at best. However I tried to
make things better. And then lived with it...

Walk this way
My first owned home was a turn of the century
house - in a questionable neighborhood - near
the train station. However it was paradise post
touring a plethora of what could only be deemed
"dumps." Back in the early eighties purchasing
a home was almost impossible given mortgage
rates hovered in the high teens. Yet somehow
(with the help of our families) my ex wife and
I dived in. Always inspired by the latest trends -
we removed layers of carpet to reveal hardwood
floors. And where there was no floor - I cut up
Pier One seagrass matting. And then installed it
"wall-to-wall" with a staple gun. Crafty huh?! 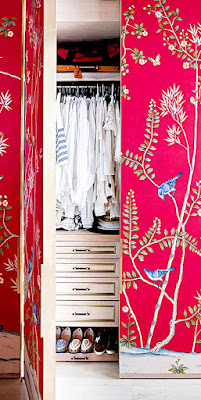 Cover up
As in most old houses, there were two rooms
upstairs that especially needed help. A small
"dressing room" with one wall of the ugliest
hollow core sliding doored closets. Which
led to a sixties bathroom edition completely
paneled in chipped and scratched melamine.
It was awful. Given we had NO money but
lots of energy - I wallpapered every inch with
a Schumacher Chinoiserie floral that I pulled
out of the hardware store bargain bin. In my
mind the end result conjured up images of
Pauline Rothschild's Albany apartment. Well,
at least to me. I wonder what others thought? 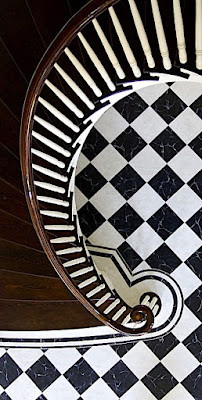 Mix & match
At that time our furniture was a mix of hand
me downs, curbside treasures, or bargains
bagged at the W.J. Sloane outlet. Over the
years our style evolved and improved. Post
relocating to Illinois, we tripled our space at
bargain prices. At that time consumed with
"English Country" we added new furniture,
rugs, etc. However given we were venturing
to the western provinces - we bought it out
east and then moved it west. All in pale pink
and blue which at that time were all the rage.
Again on a budget - I even faux marbleized
the front hall plywood sub floor. It was fab! 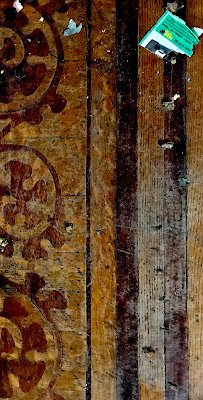 Hidden assets
During our twenty plus years together Frank
and I have renovated, updated, or rehabbed
several apartments and homes. Most of which
required lots of elbow grease and removing
all errors of prior owner's ways. Why anyone
would cover antique parquet with white wall
to wall is beyond me. Equally astounding is
how some allow decades of dirt to obliterate
key architectural elements. Fortunately there
is no greater thrill that "discovering" some
hidden or forgotten treasure. It's akin to being
Howard Carter discovering King Tut's tomb.
An accomplishment well worth the effort. 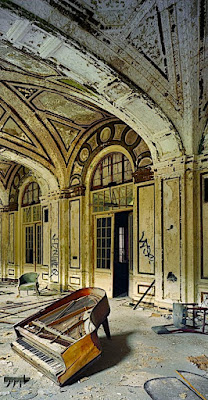 Seeing is believing
As with most things - time and luck benefits
us the older we get. However having money
to burn doesn't guarantee the best outcome.
New for newness sake is often folly at best.
Fortunately both Frank and I can see beyond
other folk's mistakes. Hence over the years
our transformative efforts have yielded many
rewards. Mostly we've just treated said spaces
with the respect they deserve. Proving that in
the end creating a successful interior outcome
has little to do with cash. Rather it's all about
doing the most with whatever you're lucky to
have. And enjoying it until your next project.
Posted by montanaroue at 4:00 AM